Despite 1.2 billion population, why does India struggle to win Olympic medals? 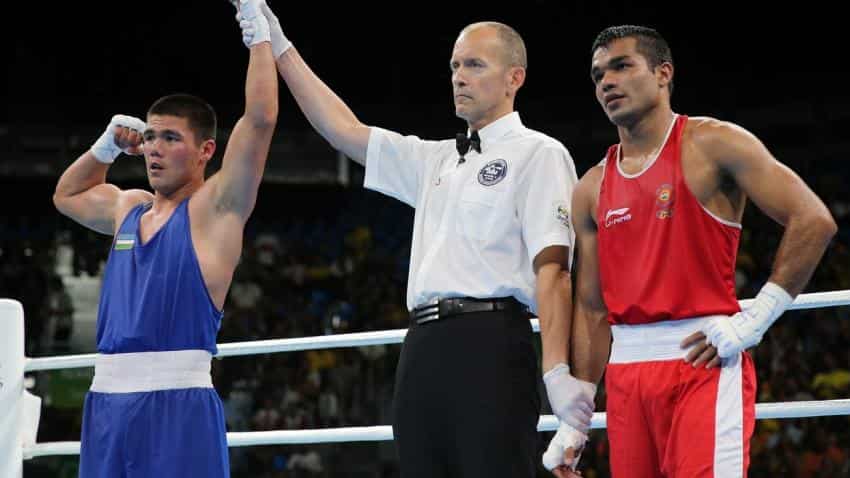 The Indian contingent to Rio Olympics 2016 was made up of 118 players competing for 15 disciplines. At the last tally, we returned home with two medals, one silver, and one bronze.

Why does India, a country of 1.2 billion people, struggle to win medals in Olympic games? Now that I've baited you, here are a couple of charts.

In the first chart, I took the top - 25 countries by count of weighted medals (gold = 4, silver = 2 and bronze = 1) in 2012, and plotted them by their GDP. Surprisingly linear fit. China, Russia, and Great Britain do better than the others. Japan, Canada, Brazil do worse than the others. But more or less, the number of medals you win is proportional to your country's GDP. 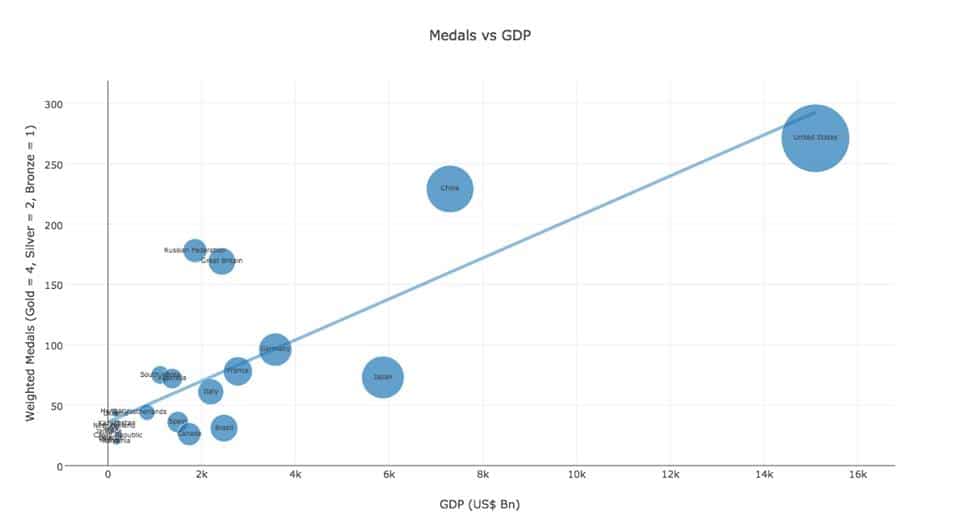 Learning #1: You have to be a large GDP country to win a large number of medals. That is, countries with institutions for sport (and not just individuals with talent) win medals.

In the second chart, I took all the countries that won a medal in 2012 (84), excluded the top-8 by GDP, plotted weighted medals against their GDP, and did a linear best-fit. South Korea, Australia, Netherlands do much better than others. But reasonably large GDP countries like India and Indonesia do terrible and are unable to take off from the ground. 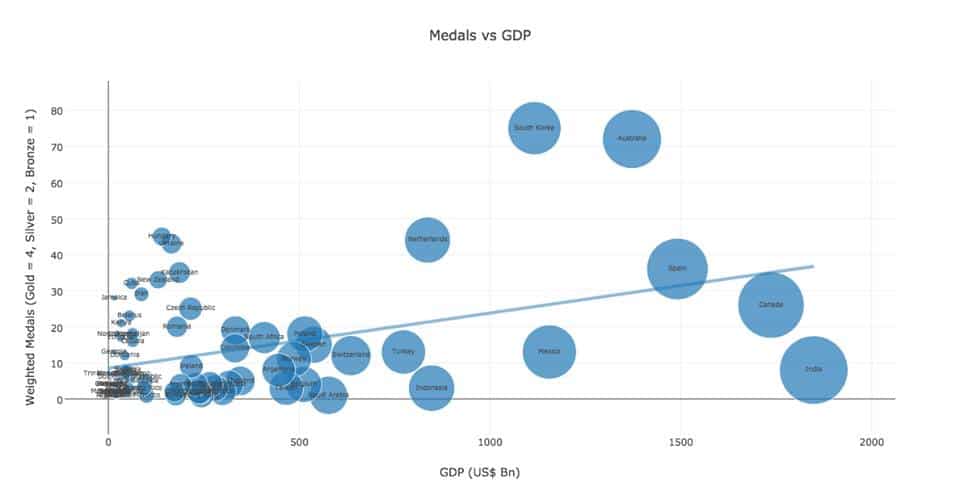 Learning #2: Large GDP is necessary but not sufficient. You also need a high per capita GDP before you can start committing budgets to sports institutions that will win you medals.

But what about all those small GDP countries on the left beating the curve massively -- Hungary, Ukraine, Kazakhstan, Czech Republic, Romania, Cuba, North Korea. Yes, your guess is as good as mine.

Learning #3: Communist-leaning countries tend to beat the curve. And they do this by institution building for one or very few sports.

But what about Jamaica, Kenya, and Iran? They are not communist, yet how are they beating the curve? These countries are rare exceptions of singular focus and institution building around one sport (track, long distance, and wrestling, respectively). Read this New York Times article on how Jamaica does it.

Learning #4: Singular focus and institution building around one sport.

So what can India do to win medals?

1. Become a large GDP country (we are already there)
2. Increase per capita GDP (another 20 years)
3. Become an authoritarian country (er, sorry, no!)
4. Singular focus on one sport (er, maybe not)

So our only option is #2. If you are doing anything that helps us increase our per capita, then you are helping India win Olympic medals (in the future). Think about it -- Olympics is more a proxy for Human Development Index (HDI) of a country than it is for raw talent in that country. By 2050, we will be a high per capita GDP country and we will be in top-10 in the medals tally. Till that happens, we need to Keep Calm and Carry On.

Zishaan Hayath, the author of this post, is the co-founder of Toppr.com. You can read the original post here.