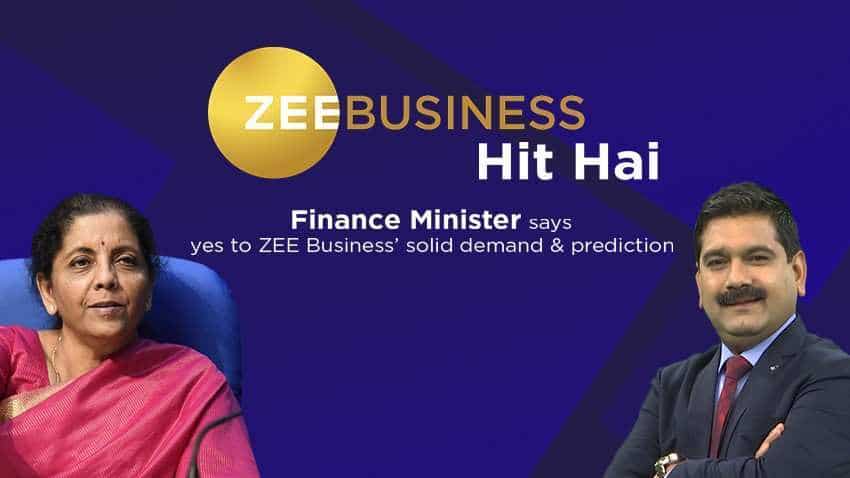 Indian equity markets maintained the rising spree today after Finance Minister Nirmala Sitharaman announced sops for the companies to boost the market sentiment. The government's booster dose came at a time when the economy was going through a tough time and the economic data released by the government showed that gross domestic product (GDP), a popular indicator to measure economic growth, was at multiple years low. On Friday, the FM had announced several tax incentives including a reduction in the corporate tax, a demand that was put forward by Zee Business Managing Editor Anil Singhvi. He had said that if Modi 2.0 gives a booster shot to India Inc by cutting corporate tax, then markets and the business world will cheer and laud the government's historical move, and in turn this will give free reign for a bull run in the stock markets.

The market rally begun after Sitharaman lowered the corporate tax from 30 percent to 22 percent for existing companies and for new manufacturing ventures corporate tax rate was brought down from 25 percent to 15 percent. At 9:30 am, BSE's benchmark indix Sensex was 2.44 percent or 928.77 points up from the previous day's close at 38,943.39, while NSE's Nifty was trading at 11,547.10,  which is 272.9 points or 2.42 percent rise.

Watch this Zee Business video below:

"A quick comeback from 10,600, post recent sharp downtick implies renewed buying interest at lower levels, hence the benchmark index could complete its pending up move towards three-digit gann number of 116(00) before any significant price retracement sets in. With a) Nifty Private Bank index rallying by over 8% in Friday’s trade (rallying from the support of its 2-year mean), b) BankNifty's breakout from the structure of lower high and c) HDFC Bank & ICICI Bank’s strong outperformance, leadership sectors are lifting the markets higher again. In such environments, retracements or corrections tend to be short-lived," YES Securities said.

Nifty Bank, Nifty Auto, among other, sectoral indices gained substantially today. However, IT index failed to buck the market trend. Nifty IT  index fell over 3.5 percent, with almost all the biggies trading in the red.  Asian shares were also trading higher on Monday on hopes of an interim China-US tariff deal after the two countries described their talks as “productive”.