Finance Minister Nirmala Sitharaman and Modi government gave a major boost to the Indian economy on Friday by announcing several tax incentives including a reduction in the corporate tax, a demand that was put forward by Zee Business Managing Editor Anil Singhvi. 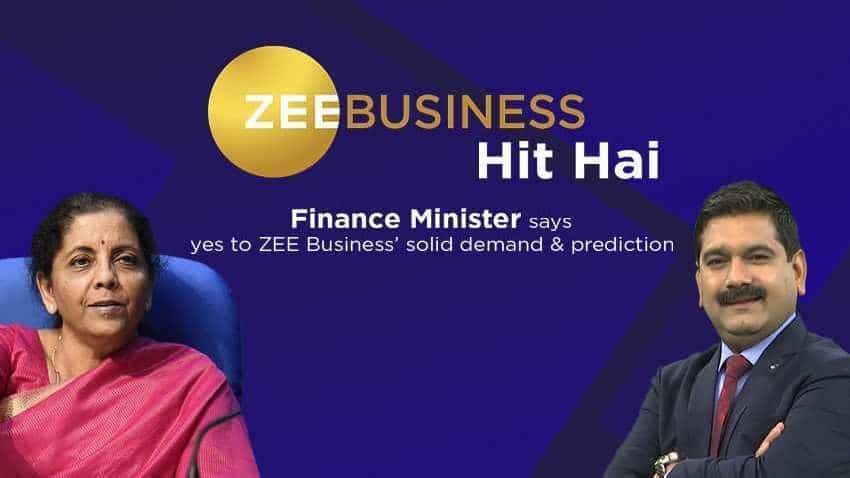 The industry too has welcomed the news and believes that it will help in boosting the Indian economy.
Written By: ZeeBiz WebTeam
Edited By: Manas Tiwari
RELATED NEWS

Finance Minister Nirmala Sitharaman and Modi government gave a major boost to the Indian economy on Friday by announcing several tax incentives including a reduction in the corporate tax, a demand that was put forward by Zee Business Managing Editor Anil Singhvi. As soon as the announcement was made, the domestic markets witnessed a positive sentiment, as predicted by Zee Business Managing Editor Anil Singhvi. He had said that if Modi 2.0 gives a booster shot to India Inc by cutting corporate tax, then markets and the business world will cheer and laud the government's historical move, and in turn this will give free reign for a bull run in the stock markets.

The industry too has welcomed the news and believes that it will help in boosting the Indian economy. SBI chairman Rajnish Kumar said that the move will effectively integrate India with the global supply chain and a boost to Make in India campaign. "The large reduction in corporate taxes across the spectrum of all companies is perhaps the boldest reform in the last 28 years! Such a rate cut will boost corporate bottomline, facilitate a reduction in product prices. Additionally, the move to incentivise setting up new manufacturing units in India comes at the most opportune time for foreign companies who could be actively looking for opportunities to invest globally," he said, in a statement.

Meanwhile, BK Goenka, President, ASSOCHAM told Zee Business that this is a historic step by the government. "The finance minister's announcement comes at a very important time. It will act as a booster and trigger a positive sentiment."

"Specifically, the reduction of the  Indian corporate income tax, clarification on the buyback tax and super rich tax are very encouraging," he added.

Finance Minister Nirmala Sitharaman announced a lowering of corporate tax rate on domestic companies to 22 per cent subject to such entities not availing any exemptions and incentives. Also, these companies will not be required to pay any Minimum Alternate Tax (MAT). Effective tax rate in this case would be 25.17 per cent, including cess and surcharge. The Minister announced an even lower 15 per cent corporate tax rate for new domestic companies making fresh investment in manufacturing. These companies should have commenced production on or before March 31, 2023 and would also get exemption from MAT.

The decision is also expected to increase capital investments

"The corporate tax relief announced by the Government will definitely boost the economy and increase capital investments. Increase in capital investments will lead to more job opportunities and growth. Whilst it may take some time for the investments to materialise, it is a step in the right direction. One should also examine how this move impacts government spending," Akila Agrawal, Partner & Head – M&A, Cyril Amarchand Mangaldas said.

"The Government's endeavor has been an integrated and multi-faceted approach. Announcing a series of measures to improve the liquidity leading to credit in the hands of the needy individuals, on one hand, and necessary & also substantial impetus to the overall economy growth, employment generation and foreign investment by slashing the corporate tax. We welcome these prompt and bold steps from the government and hope that it would help in lifting the market sentiments. It will thereby help corporates , especially NBFCs, to enhance the extent of benefits being delivered to the consumers and further empower the common man in fulfilling their needs and dreams. I am sure India would soon become a very attractive investment destination in the Asia region," he said.