New Delhi [India], March 1 (ANI): Amid debate over the third Test pitch, West Indies great Vivian Richards slammed England for complaining about the spinning wicket and added that he wants to see a similar track in the final Test of the series. 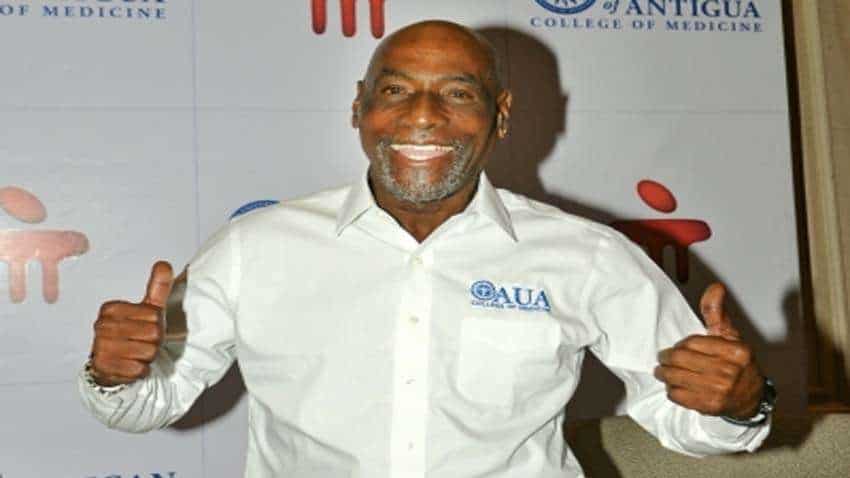 New Delhi [India], March 1 (ANI): Amid debate over the third Test pitch, West Indies great Vivian Richards slammed England for complaining about the spinning wicket and added that he wants to see a similar track in the final Test of the series.

India had managed to defeat England within two days in the pink-ball Test.

The match saw both India and England batsmen failing to shine and getting out to balls that didn`t turn and skidded through from the spinners. But critics have looked to blame the pitch for the failure of the batsmen.

India batsman Rohit Sharma clarified that he did not think the pitch had any demons. Even skipper Virat Kohli was vocal about the dreadful batting display from the two teams. Spinner Ravichandran Ashwin also echoed the sentiments.

Further, Richards also feels that batters need to prepare themselves for these conditions rather than complaining about the spinning conditions.

"I`ve been asked questions recently about the Test match that was played in India... the second and third Test match against England. And I am a little confused about the question really because there seems to be a lot of moaning and groaning about the wicket that they were playing on. I just felt that the ones who are moaning, in my opinion, should realise that there are times that you`re going to get a seaming track, a ball that is basically jumping off a good length and everyone thinks that`s a problem for batters. There are times batters sometimes cope with that," Richards said in a video posted on his Facebook page.

"But now you`ve seen the other side, and this is why I think it was given the name Test match cricket, because of the test of the mind and will and everything else that goes with it when you`re competing. And the complaints have been that the wicket is spinning too much and all that sorts of stuff. This is another side of the arc guys. People seem to forget that if you`re going to India, you should expect that. You are going to spin land. You should basically prepare yourself to know what you`re going to encounter.

"Rather than the moaning and groaning, especially just recently how quickly that Test match was over. It gives England an opportunity and a chance to assess things, to believe that for some reason the wicket that they`re going to encounter in the fourth Test is going to be the same. If I was India or I had anything to do with the preparations of the wicket, I would bring in very much the same," Richards added.

One of the living legends of the game Richards went on to praise the Indian side and said England should come out of their comfort zone and they have to face the spin.

"Ever since that first Test match, England were in their comfort zone. They have now been taken out of their comfort zone at present and they have got to find ways and means to cope with what they are going to encounter. Spin in all part of the game, this is what a Test match brings. The Indian pacers have been brilliant over the past few years in terms of substance, wicket-taking ability and stuff like that. But now that you`re in India, you are going to encounter things and have got to find a way. You`re going to get dirty. There is nothing in the rule book that says I`ve got to score my runs in pretty, classical ways," he said.

"I just believe all the moaning and groaning has got to stop and just see the classical side of things in terms of the Indian armoury. And from where I`m sitting, it`s good to see," the West Indian signed off.On Sunday, England wicketkeeper-batsman Ben Foakes said that his side knows that the pitch is going to turn from ball one as the hosts are pushing their conditions to the extremities."Obviously, we got thoroughly outplayed. Those were tricky conditions, but they played well. They have a couple of class spinners and we did not have answers to them so I think going forward, we have to be good enough to counter that to score big runs on the board. I think we know what we are going to get in the last Test in terms of surface. They are pushing their conditions to the extremities and we know it is going to spin from ball number one, it is about finding a way to play well in those conditions," said Foakes during a virtual press conference on Sunday.

"The last two pitches are the hardest I have kept on, the last game, the pink-ball was skidding and the amount it was spinning, I have never seen that and it was a challenge to keep on those wickets. We have been outplayed in the last two games, but we are in a position to draw the series, we have to put a good performance and if we go away with a 2-2 draw, it will be a good performance," he added.

The fourth-Test of the series will commence on Thursday at the Narendra Modi Stadium.If India manages to win or draw the final Test against England, then the side would qualify for the finals of the World Test Championship (WTC) and the side would take on New Zealand in the summit clash. England is now out of the WTC final contention after losing the third Test against India.