Billed as world's largest multi-stage irrigation project, Kaleshwaram is all set to get inaugurated across the Goadavari river in Telangana. The project will be inaugurated with three Chief Ministers and the Governor participating in a series of programmes at the project site in Jayashankar Bhupalapally district near the borders with Maharashtra and Chhattisgarh. 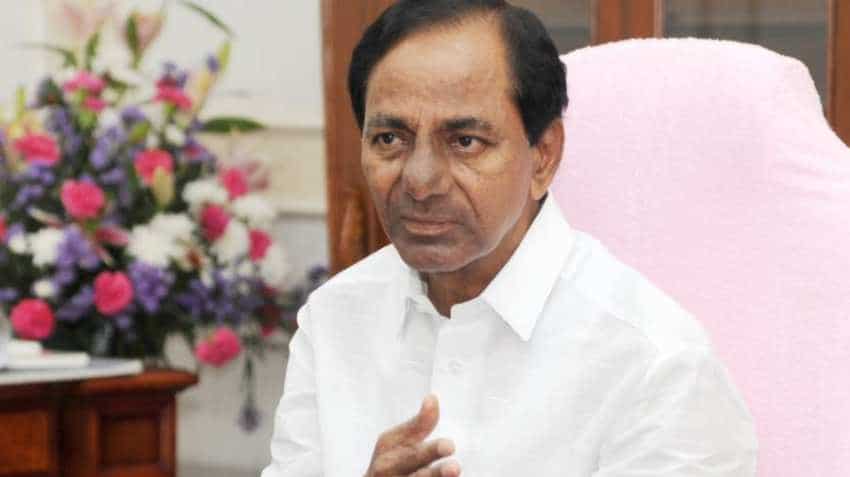 Billed as world's largest multi-stage irrigation project, Kaleshwaram is all set to get inaugurated across the Goadavari river in Telangana. Image: Telangana CMO Twitter account

Billed as world's largest multi-stage irrigation project, Kaleshwaram is all set to get inaugurated across the Goadavari river in Telangana. Chief Minister K. Chandrashekhar Rao will formally inaugurate the Kaleshwaram Lift Irrigation Project (KLIP) on Friday in the presence of his Maharashtra and Andhra Pradesh counterparts and Telangana Governor E.S.L. Narasimhan. Termed as the biggest achievement by India`s youngest state, the project has been designed to irrigate 45 lakh acres of land for two crops in a year besides meeting drinking water requirement of 70 per cent of the state.

According to IANS report, officials say the Rs 80,000 crore Kaleshwaram project is a major step towards the goal of "Bangaru Telangana" (golden Telangana) set by the Telangana Rashtra Samithi (TRS) government by bringing one crore acre area under irrigation.

"It`s a privilege and a lifetime opportunity that we are executing this engineering marvel, building the world`s biggest pumping scheme. We are engaging world-class technology involving the best agencies and manpower and are racing with time without comprising on quality," said B. Srinivas Reddy, Director, MEIL.

Here are the highlights of project:

1. The project will be inaugurated with three Chief Ministers and the Governor participating in a series of programmes at the project site in Jayashankar Bhupalapally district near the borders with Maharashtra and Chhattisgarh.

2. K. Chandrashekhar Rao has invited Maharashtra Chief Minister Devendra Fadnavis as the state extended full cooperation for the construction of the project. The two states in 2016 signed agreements to solve inter-state disputes, paving the way for the mega project.

3. Inviting new Andhra Pradesh Chief Minister Y.S. Jagan Mohan Reddy for the event is also significant as both the Telugu states have resolved to amicably solve their disputes over sharing of waters of Godavari and Krishna rivers.

4. KCR has also invited top officials of the banks which provided loans for the project. "We have not received even a single rupee from the Centre. The project is self-funded and also with loans raised from a consortium of 20 commercial banks," he said.

5. The foundation stone for the project was laid in 2016 and it is claimed to be the world`s biggest project of its kind completed in the shortest time. The construction of barrages and pump houses have been completed while the construction of the reservoirs is on at a brisk pace. The government is making preparations to lift two TMC of Godavari water per day from the Medigadda barrage, beginning July end.

6. Under the project, claimed to be an engineering marvel, water from Godavari will be lifted to the Medigadda barrage, at about 100 metre from the sea level, and from there the water will be further lifted in six stages and supplied to Kondapochamma Sagar, which is at a height of 618 metre. In other words, the water from Godavari will be lifted at about half a kliometre height, said an official note.

8. MEIL is also constructing 17 pump houses. As part of Link 1 in the first phase, Medigadda, Annaram and Sundilla pump houses are being partially readied for pumping water. The world`s biggest underground pump house is also ready to pump 2 TMCs of water per day.

TS Police Recruitment 2022: Registration begins for over 17,000 posts on tslprb.in from today; check details, how to apply and more