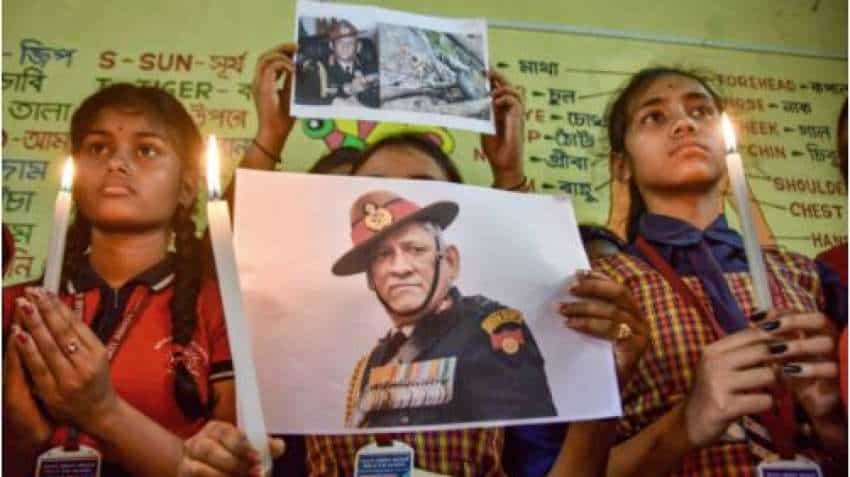 In a brief statement in parliament, India`s Defence Minister Rajnath Singh said the remains of all the deceased would be brought to New Delhi and Rawat would be cremated with full military honours. Source: PTI

The bodies of India`s defence chief and 12 others who died in a helicopter crash laid draped in the Indian flag at a defence cantonment on Thursday, before being flown to New Delhi, where the general will be laid to rest with full military honours.

General Bipin Rawat, his wife and 12 defence personnel were en route to a military staff college in southern India when the air force helicopter they were travelling in came down near the town of Coonoor on Wednesday.

Only one of the 14 on board survived the crash. The cause of the crash is being investigated.

In a brief statement in parliament, India`s Defence Minister Rajnath Singh said the remains of all the deceased would be brought to New Delhi and Rawat would be cremated with full military honours.

Rawat, 63, was appointed as India`s first chief of defence staff by Prime Minister Narendra Modi`s government in late 2019. The position was set up with the aim of integrating the army, navy and air force.

Singh said the Mi-17 V5 helicopter took off at 11.48 a.m. (06:18 GMT) on Wednesday from the Sulur Air Base. The base lost contact with the aircraft seven minutes before it was scheduled to land at a hillside military area at 12.15 p.m.

"Locals spotted a fire in the forest near Coonoor and rushed to the spot where they observed the wreckage of military helicopter engulfed in flames," Singh said.

At a colonial-era barrack in Wellington, the military cantonment town where Rawat and his entourage were headed, uniformed soldiers carefully laid out the coffins, in the presence of officers from all three services of the Indian armed forces.

Military personnel, veterans, politicians and others then paid their last respects, offering floral wreaths and flowers by the coffins.

At a military hospital nearby, the lone survivor of the crash, an air force group captain, lay on life support.

"All efforts are being made to save his life," Singh said.