Diego Maradona has passed away at the age of 60. Widely rated as the greatest footballer of all time, there was no stopping Diego Maradona`s aura from reaching levels of divinity wherever he went, with or without the ball on his feet. His murals, most of which show him with a halo behind or over his head or in the garb of Jesus Christ himself, adorn the streets of Buenos Aires, Argentina and Naples, Italy. 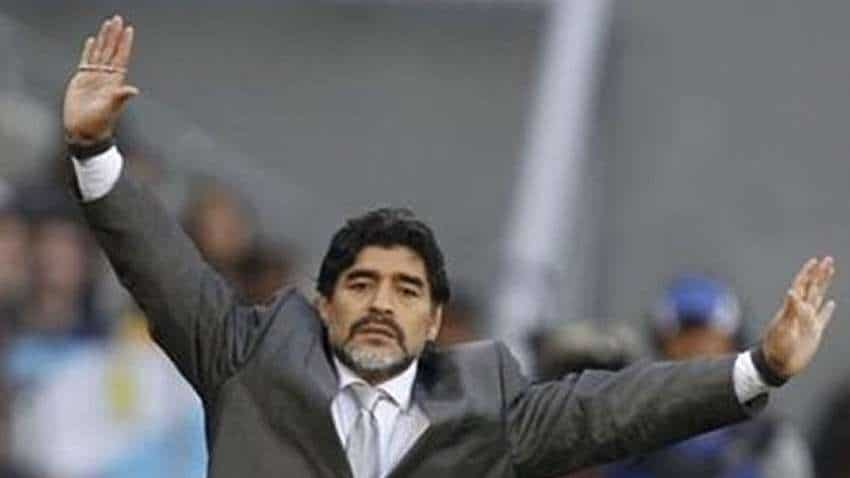 It was also evident by the flood of tributes that came from all walks of life as news of Diego Maradona's death spread around the world on November 25, 2020. Reuters

Diego Maradona has passed away at the age of 60. Widely rated as the greatest footballer of all time, there was no stopping Diego Maradona`s aura from reaching levels of divinity wherever he went, with or without the ball on his feet. His murals, most of which show him with a halo behind or over his head or in the garb of Jesus Christ himself, adorn the streets of Buenos Aires, Argentina and Naples, Italy.

It also was evident when Maradona arrived in Kolkata in 2008 and 2017 to cheering crowds. He had been retired from the game for well over a decade by then and his health was making more headlines than any football related activities. None of that mattered for the more than 1,00,000 people who flocked the Salt Lake Stadium on December 6, 2008.

It was also evident by the flood of tributes that came from all walks of life as news of his death spread around the world on November 25, 2020.

Rarely can a sportsperson legitimately be described by as wide an array of adjectives that have been used for Maradona. His skills on the pitch made him captivating, talismanic, charismatic, and went on to establish him as a legend of the game and at the same time, his behaviour off it, and at times on it, have led to people calling him reckless, obnoxious, disgraceful, clownish, and so on.

The dichotomy that came with loving Maradona was best captured by former England and Manchester United defender Rio Ferdinand after Argentina`s group stage match against Nigeria in the 2018 World Cup. Maradona was in the stands and was at his absurd best, making obscene gestures and overdoing his celebrations as Lionel Messi and company got a crucial win.

"That guy was my idol. He is my idol. What that man did on a football pitch -- he is the governor. He is the main man. He made me believe that football was achievable from an estate in Peckham. I have the most love for this guy, the way that he was on a football pitch. I don`t condone what he did last night. The pictures that we have seen. The finger gesturing. But I don`t condone people laughing at him either. I just hope he`s alright. The pictures that we saw weren`t great but I hope he`s going to be OK," said Ferdinand in a video he tweeted later.

Born in a slum area in the southern outskirts of Buenos Aires on October 30, 1960, Maradona made his senior debut for Buenos Aires-based Argentinos Juniors in 1976. He went on to a play for Argentine giants Boca Juniors in the 1981-82 season. He then shifted to Europe where he spent two tumultuous seasons with Spanish giants Barcelona. His tenure with the Catalan club ended with a nasty brawl that triggered crowd trouble in the 1984 Copa del Rey final against Athletic Bilbao.

Maradona then went to Italian club Napoli, where he had arguably the most productive period of his career. He won two Serie A titles, a Coppa Italia and one UEFA Cup in his seven seasons with the club, leaving as their all-time highest goalscorer, a record that stood until Marek Hamsik overtook his tally in 2017. He went on to spend a season each at Spanish club Sevilla and Argentine club Newell`s Old Boys before ending his career at Boca Juniors.

He played at a time when global broadcast deals were not even in the sphere of relevances for most European football leagues which meant that most of the world got a glimpse of Maradona only when he turned out for the Albiceleste of Argentina at the World Cup. He was immortalised in his country and beyond by his performance in the 1986 World Cup, particularly, the quarter-final against England in which he scored two of the most famous goals in the hallowed history of the tournament.

The first goal was scored with his hand and his explanation in the immediate aftermath that he had made contact with the ball "a little with his head, and a little with the hand of God", led to the goal being known as "The Hand of God".

Four minutes later, Maradona went on a 60-yard run with the ball from midfield, dribbling past six English players, and ended the move with a feint that left goalkeeper Peter Shilton on the ground, and scored what has since been called "The Goal of the Century".

Perhaps nothing summarises the extremes of his life that his 17-year-long international career ended when he was sent home from the 1994 World Cup after a failed drug test. He played only two matches in the tournament.

It may have been an ignominious end but hardly a surprising one. Fans had long accepted that his devils were part of the package -- a package that was too good to hate.