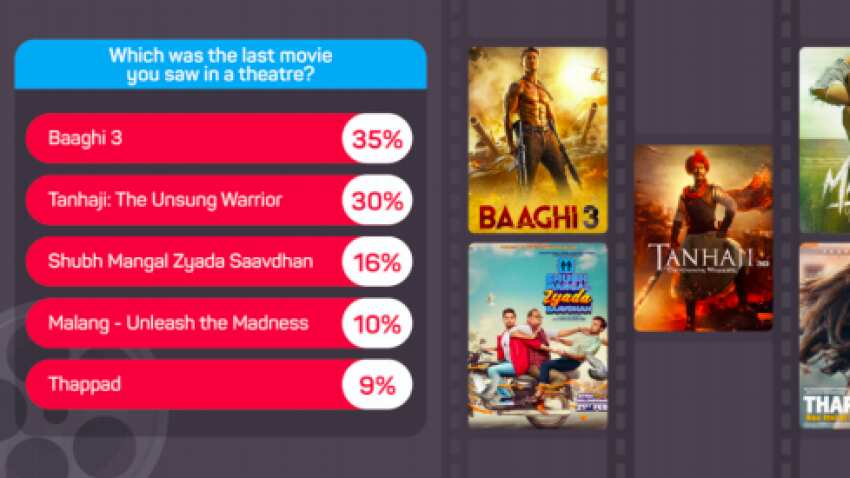 The top spot was occupied by Tiger Shroff’s Baaghi 3 which was probably the last biggest release before the lockdown
Written By: ZeeBiz WebTeam
Edited By: Harish Dugh
RELATED NEWS

Which was the last movie you watched in theatres? If somebody asked you this question in normal circumstances, you may go back a week or two. However, 2020 isn’t a normal year. With movie theatres gradually opening amid relaxed guidelines, BookMyShow recently conducted an interview, asking people about the last movie they watched in theatres. The results aren’t too surprising.

The top spot was occupied by Tiger Shroff’s Baaghi 3 which was probably the last biggest release before the lockdown. The film had earned over Rs 93 crore on box office. It was followed by Ajay Devgn’s period drama Tanhaji: The Unsung Warrior which got 30 per cent votes.

Shubh Mangal Zyada Savdhan, Malang – Unleash the Madness and Thappad completed the rest of top five. Here are the movies seen by most Indians last in a theatre.

The survey also talked about the upcoming movies, with most Indians suggesting that they are excited about Gal Gadot’s Wonder Woman (38per cent). This was followed by Akshay Kumar’s Sooryavanshi (35 per cent) and Ranveer Singh’s 83 (27 per cent) on the second and third spot, respectively.

To recall, the Union government had on October 14 allowed multiplexes, cinema halls, and theatres to reopen with strict standard operating procedures (SOPs). The Ministry of Home Affairs had then left it to states to take a final call on the matter, based on specific situations.

Most theatres in India resumed operations earlier this month with limited seating capacity but are still showing old films or re-releasing those who had come out right before the lockdown. The first major release in India could be Christopher Nolan’s Tenet, expected to hit big screens early December.