When PM Modi met Urjit Patel! Why November 19 could signal end of Centre vs RBI row

Centre Vs RBI: Prime Minister Narendra Modi and Reserve Bank of India Governor Urjit Patel reportedly met last week to sort out contentious issues that have become flash points between the government and the central bank. 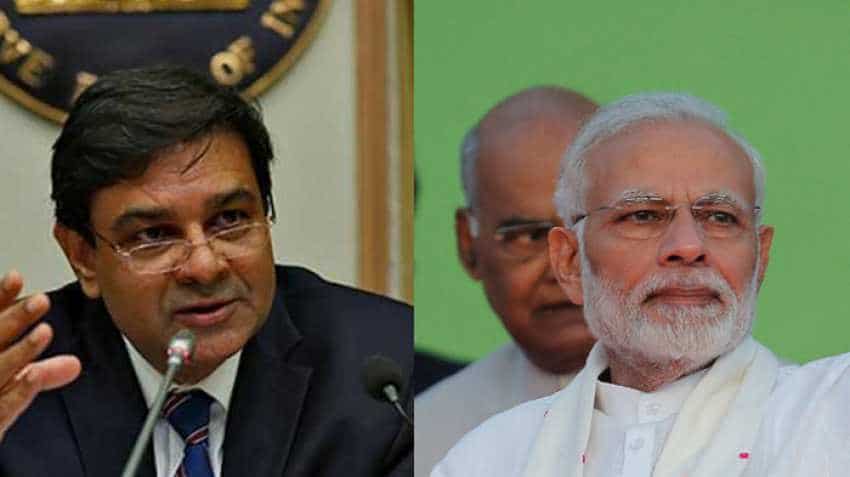 Centre Vs RBI: Prime Minister Narendra Modi and Reserve Bank of India Governor Urjit Patel reportedly met last week to sort out contentious issues that have become flash points between the government and the central bank. According to a report by news agency PTI, sources said the meeting took place on Friday last. Patel had then met senior officials in the Prime Minister's Office (PMO) in New Delhi, including the prime minister.

Several media reports hint the outcome of Modi-Patel meeting may be reflected in the upcoming RBI meeting on November 19. Will that lead to RBI toeing the Centre's line and slashing key interest rates, something that has been at the root of the tensions between them? The jury is still out on that one.

The RBI and the Union finance ministry has been involved in a face-off over issues ranging from appropriate size of reserves that the central bank must maintain to ease of lending norms to step up growth in an election year. The Finance Ministry also started discussions under the never-used-before Section 7 of the RBI Act which empowers the government to issue directions to the RBI Governor.

According to sources, the RBI is expected to create a special dispensation for lending to small and medium enterprises. However, it is not yet clear whether an agreement has been worked out to ease liquidity situation for non-banking finance companies (NBFCs) and the RBI parting with its substantial part of its surplus. The Economic Times has reported earlier that the RBI is considering a loan restructuring package for small and medium-sized businesses, as well as reviewing lending curbs on some banks. Such a move could see the central bank bow to government pressure.

In a tweet, CNBC-TV18 said the RBI is likely to let some banks out of prompt corrective action framework (PCA) and both the parties could soften their stance in the RBI board meeting on November 19. The government may also not insist on taking RBI's capital.

The RBI Governor's meetings at the PMO came days before the RBI's crucial board meeting on November 19. Contentious issues are likely to come up for discussion during the upcoming meeting. PTI reported sources as saying that the government nominee directors and a few independent directors could raise the issue of interim dividend along with the capital framework of RBI.

Some other issues that can be raised in November 19 meeting include alignment of capital adequacy norms with those in advanced countries and some relaxation in the Prompt Corrective Action framework. Additional measures to increase lending to MSMEs and NBFCs may also be discussed. However, any change in the RBI's economic capital framework can be carried out only after making amendments to the RBI Act, 1934.

The central bank has barred 11 state-run banks from lending under the so-called prompt corrective action plan until they improve their capital ratios, reduce bad debt and become profitable. The RBI vs Government rift widened after the central bank's deputy governor Viral Acharya in a speech on Oct. 26 warned that undermining central bank independence could be "potentially catastrophic".

As per the ET report, the RBI would also consider reviewing lending restrictions on banks which had reported an improvement in their financials as of September 30. News agency Reuters had reported earlier that the government will turn up the heat at the RBI's central board of directors meeting on November 19.

Will that actually come to pass, now that RBI Guv has met the PM to thrash out the most pressing issues? Depends on what exactly has been promised and what will be delivered by each party going forward.