West Bengal panchayat elections 2018: Expressing "grave concern" over the "denial" of people`s right to vote and contest the Panchayat polls in West Bengal, former Lok Sabha Speaker Somnath Chatterjee on Wednesday said there was no democracy in the state which was heading towards a situation where demands for imposition of the Constitution`s Article 356 may be made. 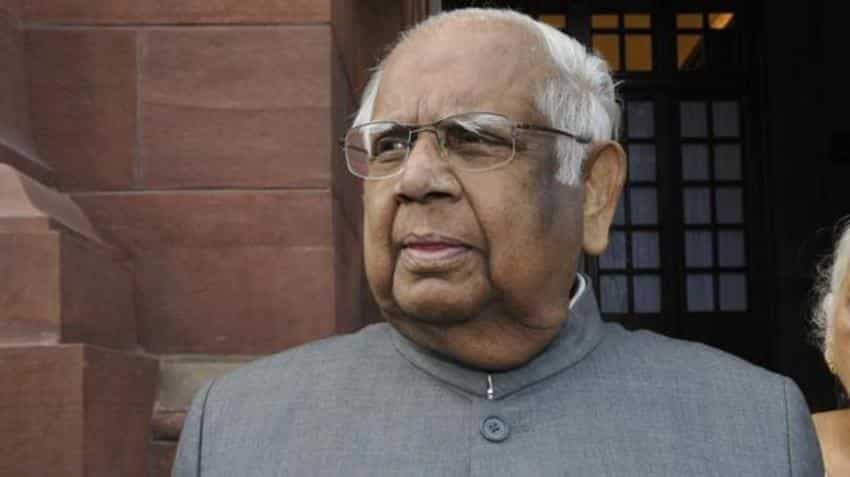 "In a democracy, election is like a festival. But now we are seeing a festival of blood," Somnath Chatterjee said. Image source: PTI
Written By: IANS
RELATED NEWS

West Bengal panchayat elections 2018: Expressing "grave concern" over the "denial" of people`s right to vote and contest the Panchayat polls in West Bengal, former Lok Sabha Speaker Somnath Chatterjee on Wednesday said there was no democracy in the state which was heading towards a situation where demands for imposition of the Constitution`s Article 356 may be made. Targeting Chief Minister Mamata Banerjee, he said: "It seems she still has lot of support in the state. So what is the need for her to do all this?"

"This is no normal election... It comes from a mentality to stick to power at any cost. "This is unbelievable. Even the minimum rights of the people are being forcibly denied. There is not even a modicum of democracy. This is not only regrettable, but also a cause for deep concern," said Chatterjee, who served as the presiding officer of the Lok Sabha from 2004 to 2009.

"In a democracy, election is like a festival. But now we are seeing a festival of blood," he added.

Apparently putting the blame for the disturbances on the ruling Trinamool, Chatterjee said: "Everybody knows who is doing all this. The opposition in Bengal do not have the strength now to do all this. We have been seeing for some time misuse of power. It seems we are living in a jungle."

Referring to the incidents of widespread violence during the nomination filing stage of the rural polls, he said: "I feel very sad in the twilight of my life when I see people`s voting rights are being trampled upon, people have no security, and no right to vote and file nomination to contest election."

The ten-time Lok Sabha MP, who was expelled from the Communist Party of India-Marxist in 2008 for not resigning after it withdrew support from the Manmohan Singh government, told media persons at his south Kolkata residence that the state was heading towards a situation where demand for imposition of Article 356 (dealing with provisions related to imposition of President`s rule in a state) may be raised.

"I don`t know, after a few days there may be a demand for imposition of article 356," said Chatterjee, sitting before a photograph of Cuban revolutionary leader Che Guevara.

"It is a matter of concern. It seems things are moving in that direction. So if anybody raises this demand, it will become a matter of consideration," the octogenarian barrister-turned politician said when asked whether such a demand would be proper.

Lashing out at the ineffective role played by police, Chatterjee said: "Police are powerless spectators."

"If police do not work for the people, then what will happen to Bengal? The law is being violated openly. This is very dangerous," he said mentioning an incident where the police stopped media persons from going into the Alipore treasury building - earmarked for accepting nominations - but allowed motorbike-borne persons without helmets to enter.

Chatterjee said while it was true that according to Article 124 of the Constitution, courts could not interfere once the election process was on, but "in situations like this, where there is only a so-called election, where one cannot file nominations, people are being beaten black and blue, such victims can surely move court".

"If the court does not stand by the victims, people won`t have any right," he said.

Lambasting State Election Commissioner Amarendra Singh, Chatterjee said "It is sad that he is unable to execute his powers. He takes a certain decision, but then changes it. What is he doing? The incumbent is sitting helpless."

Countering the former Lok Sabha Speaker, the Trinamool reminded him that he had himself earlier said there was no democracy in his party (CPI-M).

"He even failed to establish democracy in his own party. He is a respected man. But in old age, one often speaks or expresses regret in this manner. If there is no democracy in Bengal, then how come everybody is expressing his views?" said Trinamool Secretary General Partha Chatterjee.

He regretted that even a person like "Somnathbabu is speaking the language of the BJP".