West Bengal Lok Sabha Election Results 2019 Analysis: Bengal witnessed a saffron surge on Thursday as the BJP inflicted a deadly blow to state's ruling Trinamool Congress by winning 16 of the 42 Lok Sabha seats in the state and leading in two other 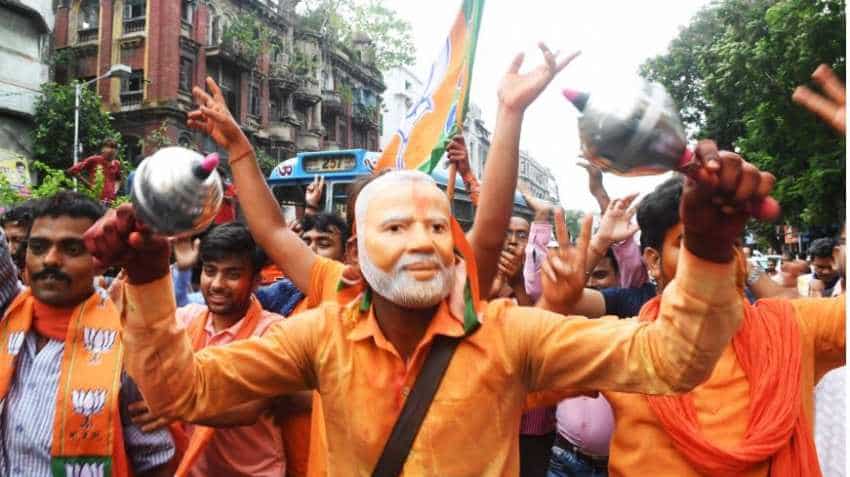 BJP worker wearing PM Modi''s mask and others celebrate after the party led by Prime Minister Narendra Modi was set to retain power for another five years after making a sweep of the 2019 Lok Sabha battle and mauling the opposition. PTI

West Bengal Lok Sabha Election Results 2019 Analysis: Bengal witnessed a saffron surge on Thursday as the BJP inflicted a deadly blow to state's ruling Trinamool Congress by winning 16 of the 42 Lok Sabha seats in the state and leading in two other. TMC won 19 seats and was leading in three others till last reports came in. The saffron party was giving the TMC a run for its money even in terms of vote share having polled 40.25 per cent of votes counted so far. The TMC has clinched 43.28 per cent. The four-party Left Front that ruled the state for 34 years till 2011 could manage a measly 7.8 per cent votes with its candidates losing deposits in all the seats but one.

Khalilur Rahman of Trinamool Congress won the Jangipur seat by a margin of 2,45,782 votes. He defeated BJP's Mafuja Khatun. Interestingly, the sitting MP of the Congress, Abhijit Mukherjee, son of former President Pranab Mukherjee, was relegated to the third spot with 2,55,836 votes.

Union minister S S Ahluwalia, BJP's sitting MP from Darjeeling who was shifted to the Burdwan-Durgapur seat this time, won the elections by a slender margin of 2,439 votes. He defeated Trinamool Congress's Mamtaz Sanghamita.

Debasree Chaudhuri of the BJP defeated TMC's Kanaialal Agarwal by 60,574 votes in Raiganj, once a bastion of the Congress.

The results seems to have shocked the TMC leadership, who declined to comment. As the trends indicated a setback for Banerjee, her residence at Kalighat and party headquarters off E M Bypass wore an abandoned look.

Banerjee, who defended her terrain like a tigress since becoming the chief minister in 2011, ending the Left Front's unbroken 34-year rule, called a press conference at her home in the afternoon which was "cancelled" without assigning any reason.

Her strident denunciation of Prime Minister Narendra Modi's policies, including his insistence on pressing ahead with contentious issues like the Citizenship (Amendment) Bill and the National Register of citizens, had catapulted her to the forefront of the forces arrayed against the BJP and the NDA in the election.

The BJP, which was then considered a marginal player, had secured two seats with 17.02 per cent votes, and the Congress four seats, polling 9.58 per cent votes.

Though Banerjee did not hold the planned presser, she took to Twitter to congratulate the winners.

"Congratulations to the winners. But all losers are not losers. We have to do a complete review and then we will share our views with you all. Let the counting process be completed fully and the VVPATs match," she had tweeted before she calling the press.

BJP's Dilip Ghosh said the poll results have sounded the death knell for the Trinamool Congress government in the state and Mamata Banerjee's party has lost the moral right to continue in office.

Switching of parties by political leaders ahead of the parliamentary polls appears not to have gone down well with the masses in West Bengal as most of the turncoats are staring at their defeat as counting draws to a close.