Maharashtra Chief Minister Devendra Fadnavis took the stock of flood situation in Kolhapur, Sangli and Satara districts through an aerial survey with other state ministers. 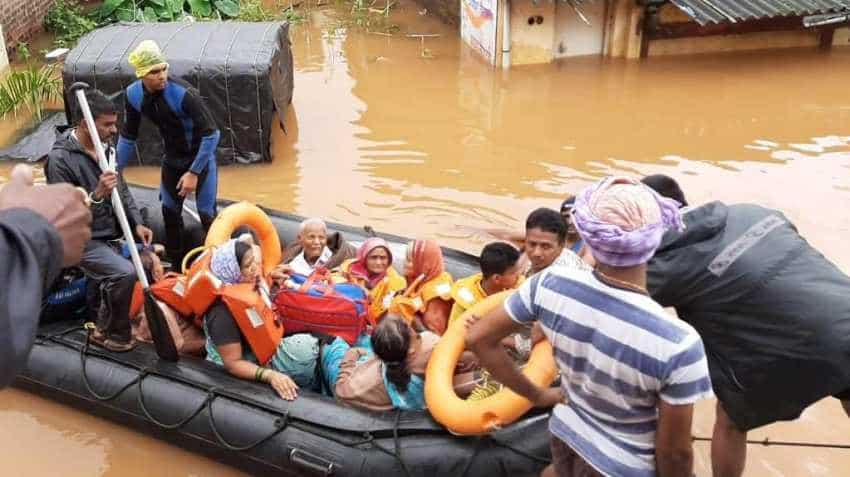 Indian Army has been deployed to assist the respective state governments in carrying out relief and rescue operations. Image source: Twitter/PIB
Written By: ZeeBiz WebTeam
Edited By: Harish Dugh

Even as the national capital is expected to remain partly cloudy today, with light drizzle in isolated places, very heavy rainfall has been predicted for Odisha and Chhattisgarh, according India Meteorological Department (IMD). The IMD, Mumbai has stated that deep depression over the Bay of Bengal off north Odisha West Bengal coast has weakened into a depression and now lies over north-east Chhattisgarh and neighbourhood.

The IMD predicted that "in view of its subsequent west –north westward movement, there is a very likely enhancement of rainfall over parts Konkan region and Madhya Maharashtra during next 2 days and reduction thereafter."

Maharashtra Chief Minister Devendra Fadnavis took the stock of flood situation in Kolhapur, Sangli and Satara districts through an aerial survey with other state ministers. He has reportedly spoken to Karnataka CM BS Yediyurappa, and the latter agreed to release 5 lakh cusecs water from Almatti Dam in Karnataka, in order to bring down the water level in Sangli, Maharashtra.

Earlier today, the IMD issued a bulletin forecasting extremely heavy rainfall over Madhya Pradesh, Maharashtra, Konkan AND Goa, Kerala and Karnataka over the next two days apart from Odisha and Chhattisgarh. Gujarat is also expected to get heavy rainfall by Friday as per Skymet.

Heavy rain was also been predicted over Gangetic West Bengal, Bihar, Jharkhand and Odisha. The flood situation, however, continued to be grim in Maharashtra and Karnataka with no abatement in rainfall and release of water from major reservoirs over the last few days.

Indian Army has been deployed to assist the respective state governments in carrying out relief and rescue operations. It has so far rescued 500 persons apart from providing medical aid and distributing food packets to those affected.

Rescue operations were undertaken in Maharashtra in the villages of Birwadi and Asankoli in Raigad district and Mouje Digraj, Haripur and Nandre villages of Sangli and Kohlapur districts. More than 1,200 people are reported to be stranded in these villages.

According to the IMD, heavy rain can be expected in Delhi only by August 13. Notably, Delhi and the National Capital Region had experienced heavy rains on August 6 that resulted in disruption of traffic and normal lives.

According to private weather forecasting agency Skymet, rainfall over Delhi can be expected only after the monsoon trough finishes passing through the south of the national capital.