The much-anticipated trailer of Suraj Pe Mangal Bhari is finally out now, and it has gone massively viral on the internet. 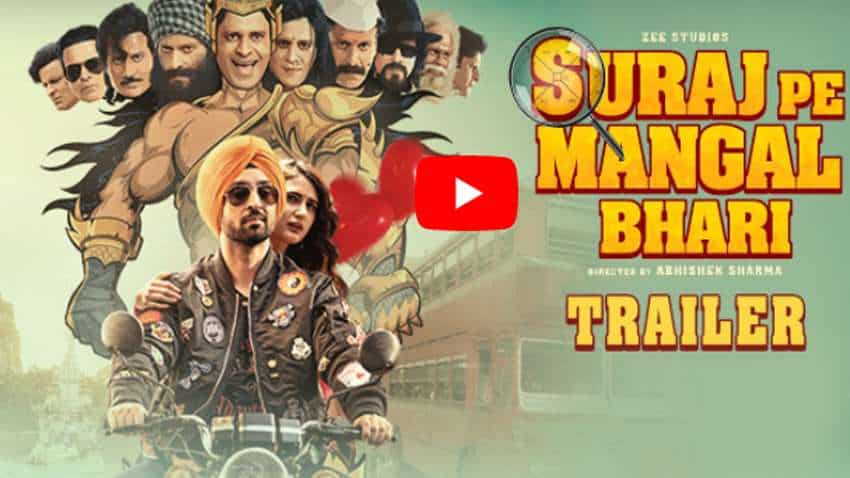 The much-anticipated trailer of Suraj Pe Mangal Bhari is finally out now, and it has gone massively viral on the internet. The Zee Studios in-house production comedy family entertainer, Suraj Pe Mangal Bhari, brings to you Manoj Bajpayee playing a 90s-era wedding detective, Mangal, who is chasing a prospective groom, Suraj, played by Diljit Dosanjh, to find and reveal his vices. The film also features Fatima Sana Shaikh in the lead role.

Suraj Pe Mangal Bhari is a social satire, a commentary on how arranged marriages happen in India; how the match-making process for marriages happens between two families. The film is among the big Diwali releases of 2020. Get ready to be a part in the most awaited wedding of the year!

Helmed by The Zoya Factor (2019) and Parmanu (2018) fame director Abhishek Sharma, Suraj Pe Mangal Bhari is a slice of life story set in the 1990s where Suraj Singh Dhillon is your quintessential Punjabi young bachelor who is looking to get hitched to a beautiful girl. He is suave, he is smart, he is handsome and funny - a killer combination! Then, why is he finding it so hard to get hitched?
Talking about the film, director Abhishek Sharma said, “This film captures the innocence of bygone times. There is a certain simplicity in the tone we have used which we hope to remind people of the movies of Hrishikesh Mukherjee and Basu Chatterjee. It is a clean family-comedy. It is a funny film but we have consciously ensured to not tread into slapstick humor. It’s a take on the great Indian wedding ‘milestone’ where the whole family participated and ends up in hilarious situations.”

Playing Goliath to Dosanjh’s David is the stellar Manoj Bajpayee, playing the character of Madhu Mangal Rane, a middle-aged wedding detective from Bombay. A cat and mouse game ensues where both are trying to gain upmanship, eliciting genuine laughs and rib-tickling situations along the way.

Will Suraj be able to gain the upper hand on Mangal?! Has it ever been possible?! That is the million-dollar question. The film's brilliant cast includes names like Annu Kapoor, Manoj Pahwa, Seema Pahwa, Supriya Pilgaonkar, Neha Pendse, Manuj Sharma, Neeraj Sood, Abhishek Banerjee, Vijay Raaz, Karishma Tanna, Vanshika Sharma amongst others.