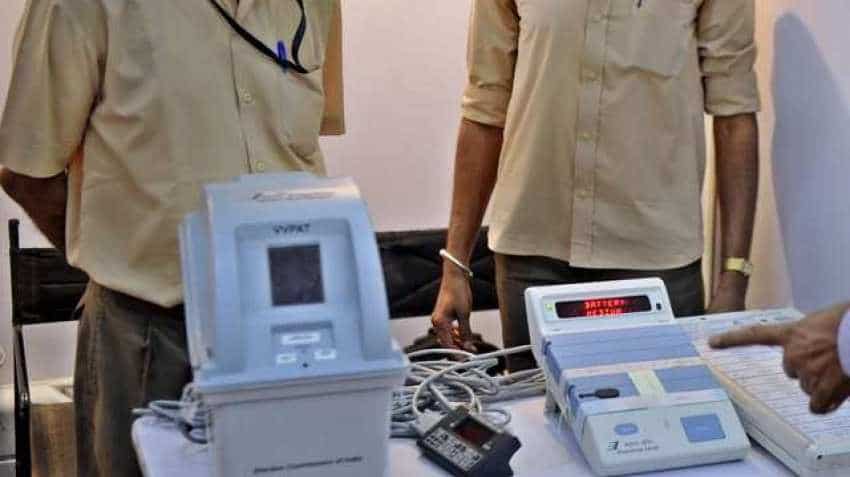 Results would start trickling by by afternoon, she said, adding that counting for assembly byelections is expected to end faster. Image source: PTI

The final verdict on Lok Sabha polls in Goa is expected to come late night on Thursday as manual counting of VVPAT slips from five booths of each Assembly segment has to be taken up to match figures, a senior poll official said Wednesday. Counting of votes for the two Lok Sabha constituencies and four assembly segments would be taken up at two centres in Panaji and Margao.

"Counting process will start at 8 am. It is expected to continue till midnight because along with Electronic Voting Machines (EVMs), the manual counting of VVPATs (Voter Verified Paper Audit Trail) from five booths of each Assembly constituency would be taken up to match the figures," said District Election Officer R Menaka.

Results would start trickling by by afternoon, she said, adding that counting for assembly byelections is expected to end faster.

A voter turnout of 72.04 per cent was recorded for the two Lok Sabha seats that went to polls on April 23. Prominent candidates in the fray from North Goa are Union minister Shripad Naik of the BJP and Girish Chodankar of the Congress.

In South Goa, BJP's sitting MP Narendra Sawaikar is squaring off against former chief minister Francis Sardinha of the Congress and Elvis Gomes of the AAP.

The assembly constituencies that went to polls are: Panaji, Mapusa, Mandrem and Shiroda. Bypolls in Panaji and Mapusa were necessitated due to the death of sitting MLAs Manohar Parrikar and Francis D'Souza, respectively while in two other seats due to resignation of sitting MLAs of the Congress.

Prominent among these constituencies is Panaji which was represented by chief minister Manohar Parrikar till his death in March this year.

The BJP has fielded its former MLA Siddharth Kunkolienkar against former minister Atanasio Monserratte of the Congress in Panaji. Former Goa RSS chief Subhash Velingkar is also in the fray as the Goa Suraksha Manch (GSM) candidate.

In Mandrem, BJP's Dayanand Sopte is battling Babi Bagkar of the Congress, Swaroop Naik of the GSM and Independent nominee Jeet Arolkar.

In Shiroda, the BJP has fielded Subhash Shirodkar against Mahadev Naik of the Congress and Deepak Dhavalikar of Maharashtrawadi Gomantak Party (MGP).