Competing in his first Olympics, Neeraj Chopra took just a few seconds to make the final round. He topped the Group A contest as well as the two qualifications rounds. 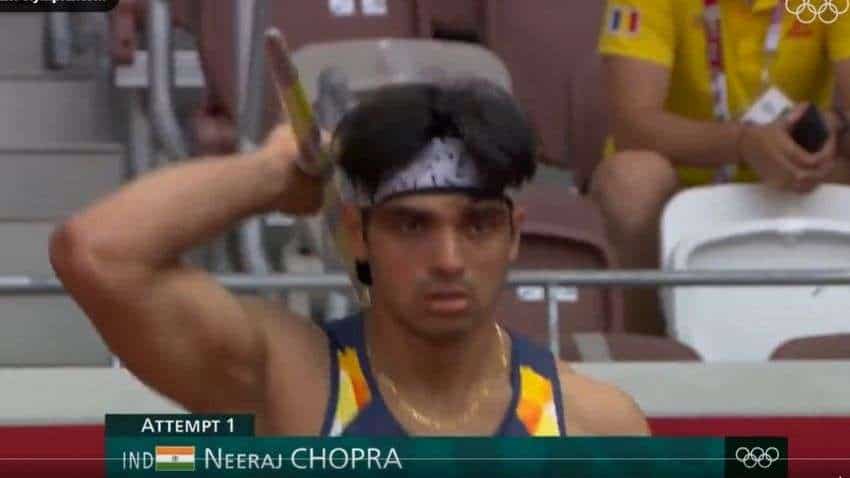 Neeraj Chopra became the first Indian javelin thrower to enter the finals of the Olympic Games with a stunning throw of 86.65m in his opening attempt. Source: olympics.com
Written By: ZeeBiz WebTeam
Edited By: Shivendra Kumar
RELATED NEWS

Medal contender Neeraj Chopra became the first Indian javelin thrower to enter the finals of the Olympic Games with a stunning throw of 86.65m in his opening attempt that put him on top of the qualification round here on Wednesday.

The 23-year-old kept India's hopes of an elusive Olympic medal from athletics alive by earning a direct entry into the finals to be held on Saturday as he sent the spear well past the qualifying mark of 83.50m in his first attempt.

Former Indian opener Virendar Sehwag did not hold back his awe at Chopra' performance. He tweeted from his official Twitter handle, "What a brilliant start from Neeraj Chopra in #JavelinThrow . Announces his arrival in grand style. Qualifies for the final in his first throw finishing top in his group. Absolutely brilliant."

What a brilliant start from Neeraj Chopra in #JavelinThrow . Announces his arrival in grand style. Qualifies for the final in his first throw finishing top in his group. Absolutely brilliant . pic.twitter.com/BX7oRFuUng

Though Chopra qualified for the finals with his brilliant performance,  Shivpal Singh, failed to make the final cut with a below-par best throw of 76.40m, which he came up in his first attempt, to finish a lowly 12th in the Group B qualification which featured 16 athletes.

According to a PTI report, competing in his first Olympics, Chopra took just a few seconds to make the final round. He topped the Group A contest as well as the two qualifications rounds.

A farmer's son from Khandra village near Panipat in Haryana who took up athletics to shed flab, Chopra left the javelin arena after his first throw.

PTI reported that after the event, Chopra said, "I am at my first Olympic Games, and I feel very good. In warm-up my performance wasn't so good, but then (in the qualifying round) my first throw had a good angle, and was a perfect throw."

Nevertheless, Chopra is not under the illusion that the final will be a totally different contest where the world's best will go for podium finish. "It will be a different feeling (in the finals), since it is my first time in the Olympics. Physically we (all) train hard, and are ready, but I also need to prepare mentally," he said. He further added that he will need to focus on the throw and try to repeat his performance with a higher score.

The PTI report stated that Chopra's performance on Saturday will go down as one of the best performances by an Indian in the Olympics, as he finished ahead of gold medal favourite and 2017 world champion Johannes Vetter of Germany.

Vetter, who had earlier said that Chopra will find it tough to beat him in the Olympics, struggled in his first two throws before crossing the automatic qualification mark with a 85.64m final throw.

The 28-year-old towering German, who came into the Olympics after having seven monster throws of 90m-plus between April and June, was lying at a dangerous seventh position after his first two throws but eventually qualified for the final at second overall behind Chopra.

"It was a bit tough today for me. It is hot, takes some time to the right timing, the right positions and the right rhythm. It is what it is right now. I have to analyse it and try to give my best on Saturday (in the final)," Vetter said.

Pakistan's Arshad Nadeem, who had won a bronze medal when Chopra clinched gold in the 2018 Asian Games in Indonesia, topped Group B to earn an automatic qualification to the finals with a second-round throw of 85.16m. He qualified for the finals at overall third behind Chopra and Vetter.