Suicide is suspected, police have revealed. The letter has been purportedly written to the Board of Directors and employees of Coffee Day Enterprises. 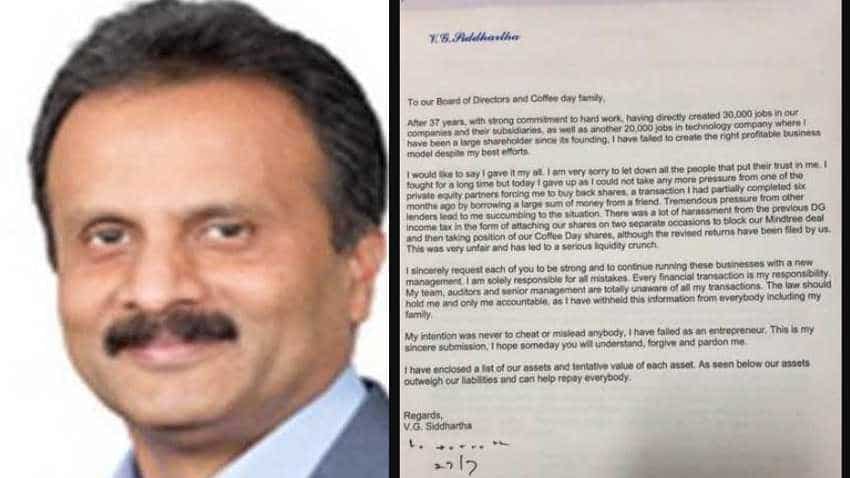 The letter said that there was a lot of harassment from the previous DG Income Tax.
Written By: Prashant Singh
Edited By: Harish Dugh
RELATED NEWS

VG Siddhartha missing case: Some startling claims have been made in the letter allegedly written by Cafe Coffee Day owner and founder VG Siddhartha, who reportedly went missing after he left from Bengaluru on Monday night. Suicide is suspected, police have revealed. The letter has been purportedly written to the Board of Directors and employees of Coffee Day Enterprises. Here are some of the key things and startling claims from the VG Siddhartha letter:-

Lot of harassment from the previous DG Income Tax

The letter said that there was a lot of harassment from the previous DG Income Tax in the form of attaching "our shares on two separate occasions to block our Mindtree deal and then taking possession of our Coffee Day shares, although revised returns have been filed by us".

"This was very unfair and has led to a serious liquidity crunch," the letter alleged. 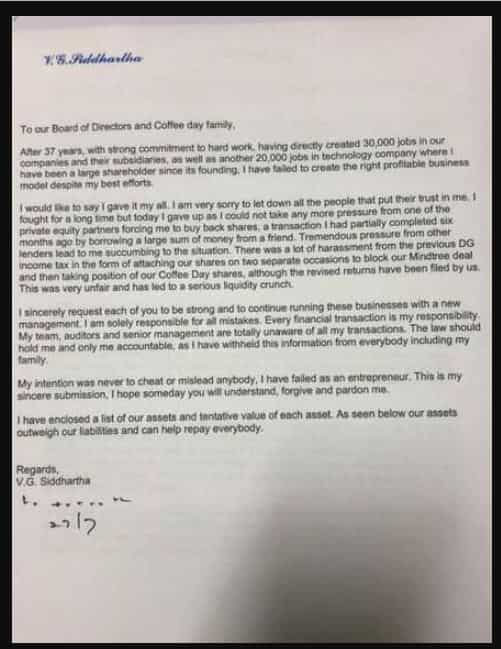 Could not take any more pressure

"Today I gave up as I could not take any more pressure from one of the private equity partners forcing me to buy back shares, a transaction I had partially completed six months ago by borrowing a large sum of money from a friend".

"I sincerely request each of you to be strong and to continue running these businesses with a new management. I am solely responsible for all mistakes. Every financial transaction is my responsibility."

The letter said the law should hold him accountable, as he had withheld this information from everybody including his family. Claiming that his intention was never to cheat or mislead anybody, he said, "I have failed as an entrepreneur. This is my sincere submission. I hope someday you will understand, forgive and pardon me".

Siddhartha said "...our assets outweigh our liabilities and can help repay everybody".

"After 37 years, with strong commitment to hard work, having directly created 30,000 jobs in our companies and their subsidiaries, as well as 20,000 jobs in technology company where I have been a large shareholder since its founding, I have failed to create the right profitable business model despite my best efforts."

Very sorry to let down all the people

"I would like to say I gave it my all. I am very sorry to let down all the people who have put their trust in me."