Terming holding of investor's summit in Uttar Pradesh and congregation of industrialists from all over as a sign of a big change, Modi said the Yogi government has overcome the previous negativity and shown a ray of hope to people with positive changes. 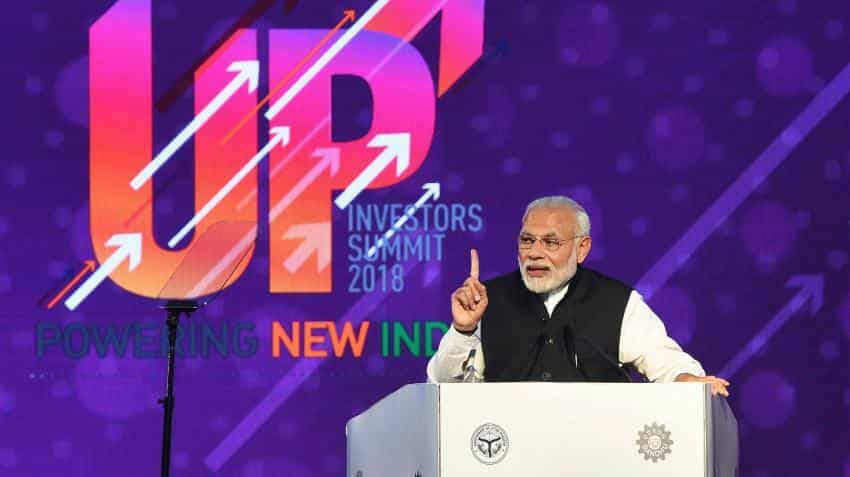 Prime Minister Narendra Modi speaks at the inauguration of the UP Investors Summit 2018, in Lucknow on Wednesday. Image source: PTI
Written By: ZeeBiz WebTeam
RELATED NEWS

Prime Minister Narendra Modi announced a Rs 20,000-crore defence industrial corridor in Bundelkhand region, one of the most backward regions of Uttar Pradesh, and said the Yogi government has pulled the state out of prevailing negativity.

Inaugurating the UP Investors Summit 2018 in Lucknow today, the Prime Minister said, "Of one of the two defence industrial corridors mentioned in the budget, one is proposed in the Bundelkhand region of the state which will bring an investment of Rs 20,000 crore and generate employment avenues for 2.5 lakh people."

"Keeping in mind the development of Bundelkhand, the government has decided to extend the Uttar Pradesh's defence corridor to Agra, Allahabad, Lucknow, Kanpur, Jhansi and Chitrakoot," Modi said.

In the 2018 budget speech, Finance minister Arun Jaitley had said that two defence industrial production corridors will be developed in the country.

Referring to the views expressed during election campaign that state needs two engines for ensuring its development, the prime minister cited the various schemes launched by his government, specially pointing out at the Mudra yojna which he said could help achieve this objective.

Stressing that with such vast potential, diversity and availability of resources, Uttar Pradesh can become India's growth engine, Modi said potential, policy, planning and performance leads to progress and both Chief Minister Yogi Adityanath and people of the state are ready to give this super hit performance.

Terming holding of investor's summit in Uttar Pradesh and congregation of industrialists from all over as a sign of a big change, Modi said the Yogi government has overcome the previous negativity and shown a ray of hope to people with positive changes.

"When there is a change, it starts showing ... This investors meet and coming of investors and entrepreneurs is a big change," he said adding that under the fearful and insecure atmosphere prevailing in the state previously the condition was not conducive for investments to come here.
"Uttar Pradesh has values and virtues, but it also needs value addition in all spheres.. I am happy that the Yogi government is taking decisions for value addition in the core strength of the state," the prime minister said.

"Policies are being made linking industrial development with employment opportunities...Investors will now get red carpet instead of red-tapism," he said pointing at the new single window clearance app launched at the summit.

"In UP's economy, MSMEs have a major role .... After agriculture, MSME sector offers the highest possibility of employment," he said, adding that there are 50 lakh MSMEs operational in the state which have also earned the state name at the national and international level.

"We are happy that keeping this important fact in mind the state government has brought 'one district-one product policy', this could be a game changer, he stressed.

Saying that there was no dearth of resources in the state, the Prime Minister said Uttar Pradesh has huge potential for ethanol and biofeul, and clean energy can resolve many problems in Delhi and NCR.

"I am sure the new tourism policy announced by the UP government would facilitate investment," he said, while referring to the Kumbh Mela in Prayag slated for early next year, and added, "Tourism is a multiplier for growth. UP needs to strengthen its eco-tourism."

He said, "It is a matter of pride for the state that fortune-500 companies are participating in this summit. I want to tell you all that till now we have signed 1,045 MoUs worth Rs 4.28 lakh crore. I have recently presented budget of Rs 4.28 lakh crore and the figure of MOUs signed is the same... We are heading towards new UP."

The CM said said he would himself oversee that the MoUs signed are executed, and those who are coming to invest in the state get all the facilities.

"I welcome all the guests including industrialists. With PM's guidance and blessings, UP is heading towards development and shedding its Bimaru tag. We are trying to become developed. PM's guidance helps us in good governance and taking the state on path of development," he said.

The summit is an attempt to establish UP among the developed states and its focus areas include food processing, dairy, handloom and textile, MSME, IT, start-ups, electronic manufacturing, films, tourism and civil aviation, he added.

Stressing that the state was providing basic needs for investments like law and order, infrastructure, power and roads, he said he would ensure an administrative setup which will be transparent and answerable.

"We have established rule of law in the state in past 11 months and taken initiatives to maintain peace," he said, adding that state investment promotion board has also been set up to facilitate industrialists willing to invest.

"For ease of doing business approvals, permissions, licences are going to be under one roof. We are going to implement digital clearance which will be monitored by the CM office," he said.

Adityanath said that the state's start-up policy will provide innovation base to new entrepreneurs and associated IIT Kanpur, BHU and 30 engineering with it.