Sanjeev Sanyal, Principal Economic Advisor, said,  "see, it's natural, the demand for cash keeps on changing with time. But has seen a sudden rise in past 2-3 weeks and was triggered in some areas like Karnataka and Telangana. But it is nothing to panic over as there is plenty cash available with the Reserve Bank of India. We will find a solution to this cash crunch in few days." 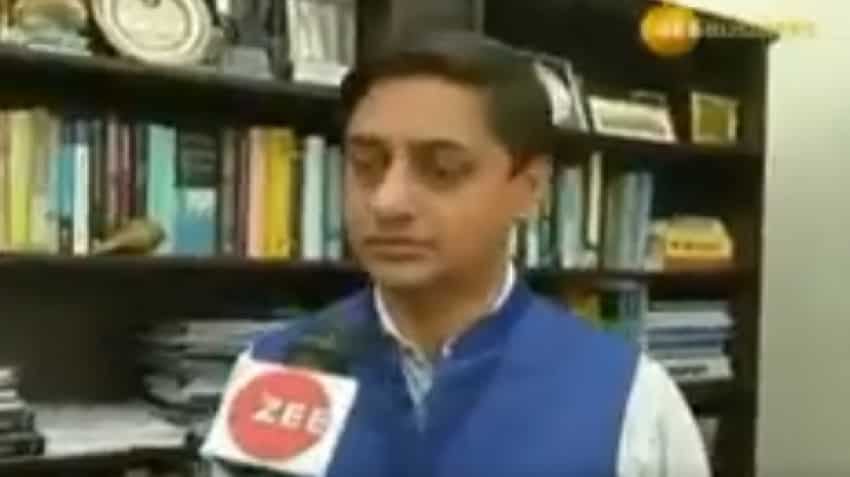 On shortage of cash in ATMs in several parts of the country, Sanjeev Sanyal, Principal Economic Advisor, said some unusual demand of cash over past few weeks has led to this eventuality. Image source: Zee Business
RELATED NEWS

At a time when the country is struggling with a shortage of cash in ATMs in several parts of the country, Sanjeev Sanyal, Principal Economic Advisor, in an exclusive talk with Zee Business's Alok Priyadarshi said some unusual demand of cash over past few weeks has led to this eventuality. But there is nothing to be afraid as enough cash is available and more banknotes are being printed to meet the demand. Here are edited excerpts from a comprehensive interview:

Q: The government has termed the shortage of cash in ATMs as extraordinary. Can you please let us know something about the situation? Why are the banks failing to take the banknotes to the ATMs?
A: See, it's natural, the demand for cash keeps on changing with time. But has seen a sudden rise in past 2-3 weeks and was triggered in some areas like Karnataka and Telangana. But it is nothing to panic over as there is plenty cash available with the Reserve Bank of India. We will find a solution to this cash crunch in few days.

Q: It is being said that currency chests are available with the RBI but their transportation to banks and increasing demand by the lenders are a cause for this shortage.
A: Yes, it takes time. Normally, the supply chain is maintained at a pace. But supplying takes time, at least when the unusual and sudden demands of cash props up. It happens across the world. But, this sudden spike can also be attributed to the false messages that are being circulated over Whatsapp.
We are sending cash to deal with the situation and the government is trying its best to inform people that there is no such problem with the banks.

Q: The government is saying that the existing shortage is related to certain local demands like it's the marriage season, agriculture, even state elections. Do you see some other reason behind this extraordinary situation?
A: I can't comment on this. I would not like to speculate on what can be the reason for this unusual demand but can just say that there is a problem and we are working to resolve it. In fact, we are responding to this and every effort will be made to make sure that ATMs across the country have more than adequate cash for you.
The true cause will be ascertained after analysing the facts of available data. DEA Secretary would comment on it if he wants to do so.

Q: On Rs 2000 banknotes, the government in its statement has said that it is careful in printing these notes and has stopped printing them for now. It is being said that these notes are being hoarded. Can you let us know about the government's strategy for printing this denomination notes?
A: See, Rs 2000 banknote is rarely used in daily transactions and at the end of the day, small banknotes - Rs 500 and below- are demanded in every day usage. At present, the RBI and the Finance Ministry is paying attention to printing the small notes. But if these banknotes are being hoarded than we will look into the issue and take possible steps to stop it.

Q: There is talk that Rs 2000 notes are being hoarded. Then let us know about the steps that are being taken by the government to recover these banknotes?
A: A lot of ways are there to recover those notes but right now, we are concentrating on supplying the banknotes to ATMs and end the cash crunch problem at the earliest. Once the demand is sufficient, we will look into the issue and analyse the reasons and take actions in accordance with the same.

Q: Currently, the currency circulation of the banknotes in the country, which stands at 18.5 lakh crore, is higher than the notes which were in circulation prior to demonetisation. Do you think that the government's digital or cash-free economy movement has failed? Secondly, speculation is there that the ongoing crisis is a step towards next demonetisation. What can be the reason behind it?
A: See, demand for cash increases when the economy goes up. And the growth in demand is natural. The landscape of our economy has changed in past two years and has improved a lot. The demand for cash will definitely increase with a positive change in the landscape of the economy. If you look proportionally, then the existing use of the cash is less than its use at the time of demonetisation.
Secondly, when you talk about the digital mode of payment then you can see that you are using the digital mode of payments in several things like while booking flight tickets or ordering something on Flipkart or Amazon or while filing the IT returns. In fact, digital mode of payment is increasing with time.

Q: So, we should assume that the government will come up with some policy to control such unusual spike in the demand for currency note?
A: See, it is not a policy issue but is a management issue. Right now I cannot comment on what steps will be taken but will look into the data to analyse the reason that led to this spike. If the existing problem is just related to transportation of the cash, we will solve it.