Unprecedented fear of neighbours is not allowing people to get themselves tested: A Velumani, Thyrocare

Arokiaswamy Velumani, Managing Director and Chief Executive Officer, Thyrocare, talks about government’s permission to conduct tests for COVID-19, people reaction and what the government should do to make people get them tested, who are fearing among others during a conversation with Swati Khandelwal. 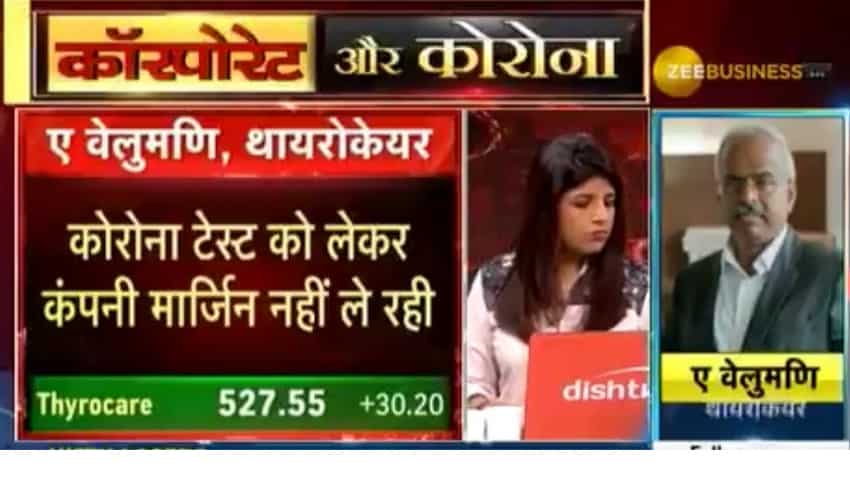 Arokiaswamy Velumani, Managing Director and Chief Executive Officer, Thyrocare, talks about government’s permission to conduct tests for COVID-19, people reaction and what the government should do to make people get them tested, who are fearing among others during a conversation with Swati Khandelwal, Zee Business.

Q: The government has approved private labs for COVID-19 testing, us, let us know the situation and the way people are reaching and your response to it?

A: The private labs have been strengthened. But, it has created an unprecedented panic among people and they are worried in a way that they don't know that this is not a blood test but it is a test of the biological swab that is collected from the nose and throat. This surprised them.

We received around 5000 enquiries on the first day and when they were informed that they will have to pay Rs 4,500 for the test then they were not ready for it, except 30 who were willing to pay. Out of those 30, almost 90% requested not to come to their homes in an ambulance and with their PPE and then they cancelled the test as they were worried about the neighbours knowing. Finally, swabs of 3 people were collected from form one hotel, where the patient was quarantined. Thus, we were able to collect only 3 specimens from the hotel. This means, testing people is near to impossible in India at present.

Q: The government has decided that this test should not cost beyond Rs 4,500. So, you are keeping some margin on this or just passing it on to the public at the same cost?

A: We can’t keep any margin on it as the government has capped the test and charging anything above it is a crime. That’s why no player will charge anything above that.

Q: What will be the price if we chose government labs instead of the private labs for the test?

A: Specimen collection is a big challenge in this test. Secondly, a slight test for wellness has a 15% collection charge which turns up to be 50% for this test, as the collection is a challenging issue. So, just Rs 2,000 comes to the lab if a patient gets himself tested by paying Rs 4,500 as the rest part of the money is spent in the collection process.

Q: What the government hospitals are charging for this test?

A: Collection of the cost is not easy for the government as putting staff and establishment cost will turn huge. Laboratories doing it at large value can only make it happen it at Rs 4,500. We spent Rs 3 lakhs on the three tests that we conducted yesterday. Thus, less volume will increase the cost and the cost announced now is the cheapest cost for test technology.

Q: You are saying that Rs 4,500 is the minimum cost and patients will have to pay it and that’s why people are not coming forward to get themselves tested. So, what will your next step if the situation remains the same, i.e. you will either bring down the cost or will stop testing patients?

A: We have the responsibility of testing and if people are not ready to get themselves tested at this cost then it will not create any difference if the cost is reduced. The second challenge is that an ambulance is needed if you have to move out even to get your employees out from their homes. Even the employees engaged in testing are also afraid. Few of our employees have informed that neighbours in the society have panicked and requested them to not to go to the office or not to come back.

Q: Then, what the government should do to encourage people to get them tested?

Q: How you are managing the kits?

A: 2000 kits are available with us thus we are not worried till 2000 samples are collected. More kits will be available if the number goes beyond this. The kit is not a problem but the cost is. Increase in the competition will reduce the cost, which will increase when the volume is available for which people should be ready to get themselves tested.