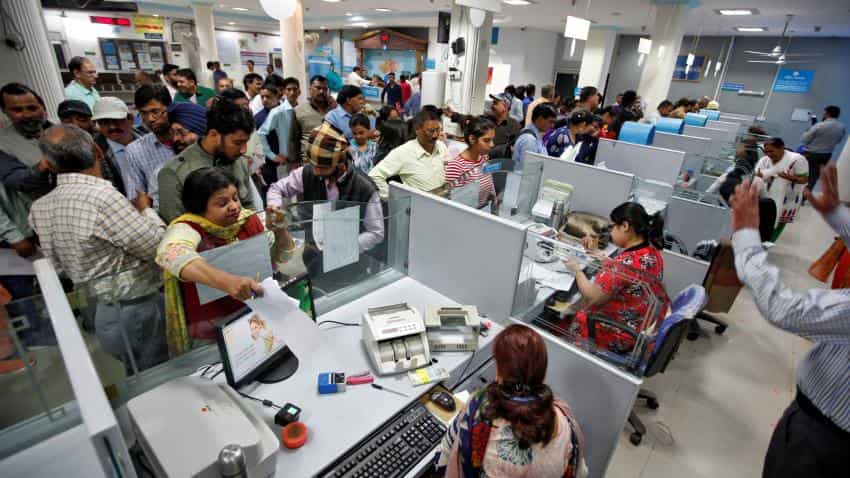 People stand in queues at cash counters to deposit and withdraw money inside a bank. Image Source: Reuters
Written By: PTI
RELATED NEWS

The Cabinet on Thursday discussed amending laws to levy close to 60% income tax on unaccounted deposits in banks above a threshold post demonetisation of high-denomination currency notes.

The move comes amid banks reporting over Rs 21,000 crore being deposited in zero-balance Jan Dhan accounts in two weeks after the 500 and 1,000 rupee notes were banned, which authorities apprehend may be the laundered blackmoney.

There was no official briefing on what transpired in the meeting that was called at short notice as Parliament is in session. Traditionally, there could no disclosures outside on any policy decision taken during the sitting of Parliament.

There have been various statements on behalf of the government ever since the demonetisation scheme was announced on November 8, which has led to fears of the taxman coming down heavily on suspicious deposits that could be made to launder blackmoney.

Officials have even talked of a 30 % tax plus a 200 % penalty on top of a possible prosecution in cases where blackmoney holders took advantage of the 50-day window for depositing the banned currency.

Sources said the government plans to bring an amendment to the Income Tax Act during the current winter session of Parliament to levy a tax that will be higher than 45 % tax and penalty charged on blackmoney disclosed in the one- time Income Disclosure Scheme that ended on September 30.

Sources said the government is keen to root out benami deposits, particularly in Jan Dhan accounts.

There was also talk of the government imposing a limit on domestic gold holding, but it is not clear if the proposal was discussed at the Cabinet meeting chaired by Prime Minister Narendra Modi.

PM Modi's announcement on November 8 to demonetise high-denomination currency notes had swept away 86 % of the currency in circulation in the biggest-ever crackdown on black money, corruption and counterfeit currency. The move had led to Rs. 14 lakh crore worth currency being withdrawn from circulation.

The Cabinet meeting, summoned at a very short notice, comes amid reports of high tax penalty terrifying people from putting their cash savings in the formal banking system.

The sources said the government wants all of the 500 and 1,000 banknotes to be deposited and not burnt or destroyed for the fear of penal action.

The Income Tax Department had previously warned that cash deposits above Rs. 2.5 lakh threshold post demonetisation decision could attract tax plus a 200 % penalty in case of income mismatch.

It was stated that the department is tracking all cash deposited during the period of November 10 to December 30, 2016, above a threshold of Rs. 2.5 lakh in every account.

This had instilled fear in people with reports of the banned currency even being destroyed.

The sources added that the government may come out with a deposit scheme or an instrument like bond where the cash savings in the banned notes could be deposited.

A 50-day window was given to holders of the old currency to deposit in their bank accounts. But the penal tax provisions were deterring many.a