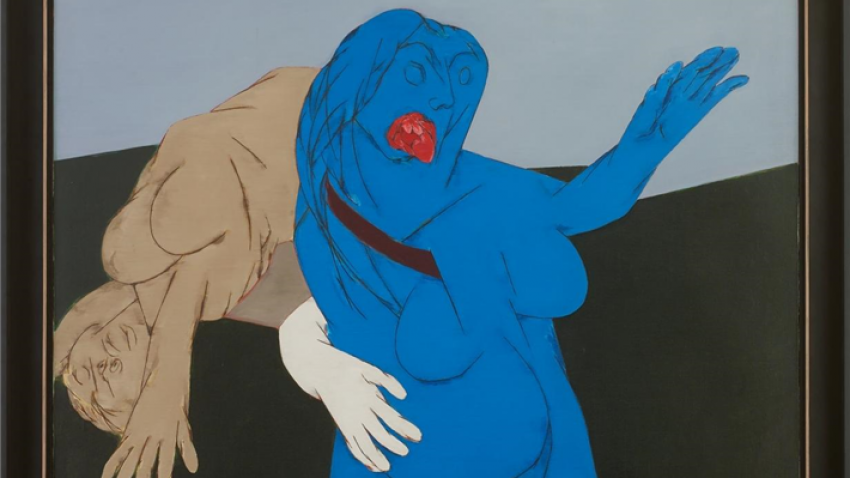 The Summer Online Auction by Saffronart, an international player in the art market, witnessed this sale. Image source: IANS
Written By: IANS

In a record-breaking sale at an online auction on Thursday, Tyeb Mehta's iconic painting "Kali" (1989) was sold at a whooping Rs 26.4 crore, setting a new record for the artist. The painting represents the eternal cosmic dilemma of the human condition: the battle of good and evil, creation and destruction.

The Summer Online Auction by Saffronart, an international player in the art market, witnessed this sale.

The buyer then was New Delhi's Kiran Nadar Museum of Art.

Saffronart has not revealed who bought "Kali", with a representative saying that disclosing the identity of the buyer was against their policy.

"The sale of Tyeb Mehta`s Kali marks an important achievement in modern Indian art sales, and paves the way forward for online auctions of Indian art," Dinesh Vazirani, CEO and Co-founder of Saffronart told IANS after the sale was announced.

"In our 18 years as India`s leading auction house, our focus has been to make the best of Indian art accessible to audiences around the world," he added.

Mehta`s "Kali" is the largest of only three standing figures painted by the artist.

It was once part of the art collection of the eminent theatre director, Ebrahim Alkazi.

Mehta, who spent most of his life in Mumbai, passed away there on July 2, 2009 following a heart attack. He was a recipient of the Padma Bhushan in 2007.