The note ban-induced liquidity crisis has resulted in sales falling 11.3% between November and January. The conversion to BS-IV emission norms, which is coming into effect from April, also resulted in some inventory correction taking place across OEMs from February. 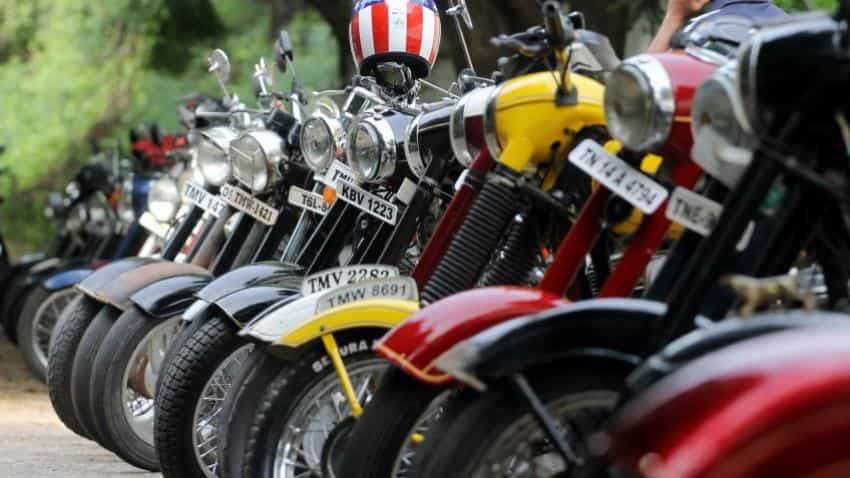 Motorcycles again returned to low growth levels of 5.1% in the aftermath of demonetisation, Photo: IANS
Written By: PTI
RELATED NEWS

The two-wheeler industry, which has been vrooming with high double-digit growth till October, is likely to shrug off the note ban shocks and close the outgoing financial year with a 7-8% growth, according to a report.

The note ban-induced liquidity crisis has resulted in sales falling 11.3% between November and January. The conversion to BS-IV emission norms, which is coming into effect from April, also resulted in some inventory correction taking place across OEMs from February.

Overall, the industry closed the first 10 months of fiscal 2017 with a growth of 8.3%, which although better than the industry growth rates over the past four fiscals, remains a far cry from the double-digit growth prior to November 2016.

"The impact of note ban appears to have moderated with the industry limping back to normalcy as reflected by smaller volume contraction in January and expectations of flattish February and March. For the fiscal 2017, we expect the industry to grow 7-8%," Icra said in a report.

The agency also expects some deferred purchases during Q3 and Q4 to result in better sales in fiscal 2018, leading to 8-10% growth during the year. "While the gap in growth rates will narrow, scooters will continue to out pace motorcycles sales in fiscal 2018," the report said.

During the note ban period, only moped sales have remained relatively insulated, and have maintained their double-digit growth, albeit on a low base, growing 26.8%. On other hand, scooters, while continuing to out pace the industry growth, has grown so far 12.5%, which though is much lower than the 24.7% growth till September.

Motorcycles, which had been on the path of revival from the de-growth and flat sales reported since fiscal 2013, again returned to low growth levels of 5.1% in the aftermath of demonetisation, the report said.

Overall, the agency has reiterated its stable outlook for the industry and over the medium term, the industry is expected to report a volume CAGR of 8-9% with demand expected to be driven by structural factors like favourable demographic profile, growing middle-class and urbanisation besides moderate penetration levels.

"We expect exports to clip at a CAGR of 8-10% over the next three years with a gradual pick up from next second half as key markets are showing signs of a recovery," concludes the report.