Trump India Visit: US President Donald Trump`s visit to India next week will not result in even a limited trade deal, they still have major concerns over India`s trade barriers, says Trump administration officials. 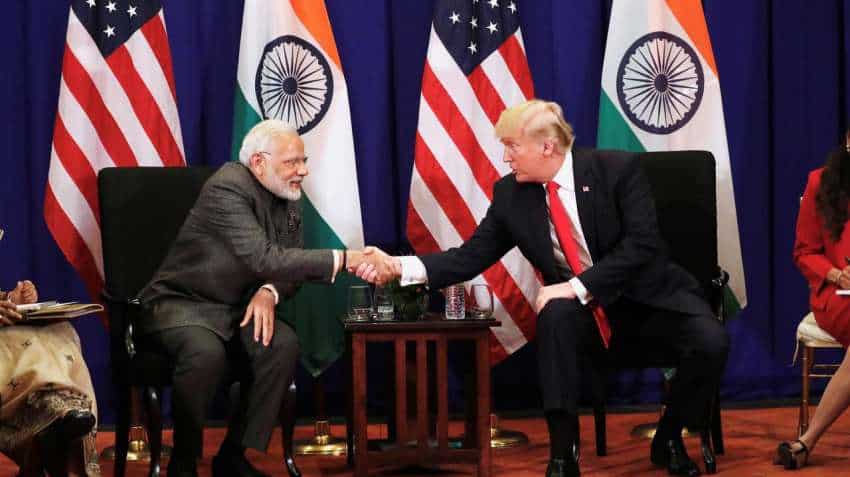 Trump India Visit:Trump administration officials said that US President Donald Trump`s visit to India next week will not result in even a limited trade deal, they still have major concerns over India`s trade barriers. Photo:Reuters
Written By: Reuters
RELATED NEWS

Trump India Visit: Trump administration officials on Friday acknowledged that US President Donald Trump`s visit to India next week will not result in even a limited trade deal, saying they still have major concerns over India`s trade barriers.

Hopes that the world`s two largest democracies could negotiate a "confidence-building" deal in time for Trump`s arrival Monday on a two-day visit have faded in recent days as differences over agriculture, medical devices, digital trade and proposed new tariffs fester, according to business groups.

U.S. concerns that led last year to the suspension of India`s tariff-free access for some $5.6 billion in exports under the 1970s-era Generalized System of Preferences still remain, a senior Trump administration official told reporters on a conference call.

"We do want to make sure that we get this balance right. We want to address a lot of concerns and we`re not quite there yet," the official said, adding that Trump will likely discuss these concerns with Indian Prime Minister Narendra Modi.

Trade talks will continue, but new Indian tariff proposals aimed at strengthening the country`s "Make in India" domestic manufacturing push have made them more difficult, the official said.

Apart from growing protectionism, the Trump visit comes against the backdrop of India`s multibillion-dollar purchase of a Russian missile shield system, which added friction to its ties with Washington.

India in its Feb. 1 budget proposal announced new import tariffs on medical devices, walnuts, toys, electronics and other products in a move aimed at reducing imports from China but affecting many U.S. firms.

The new tariffs surprised U.S. negotiators, especially as they were working with Indian counterparts to reduce the impact of India`s price controls on U.S. medical devices such as cardiac stents and knee implants.

"We will be discussing those concerns and what we see an increase in barriers not a decrease. This will certainly come up among the leaders," the U.S. official said.

The official did not completely rule out any trade-related announcements during the trip, but said this was "really wholly dependent on what the Indians are prepared to do."

U.S. Trade Representative Robert Lighthizer, who has been leading the trade discussions, will not be among the U.S. delegation accompanying Trump, the official said. Earlier this month, Lighthizer cancelled a trip to India to work out a package, even as India made some new proposals to improve U.S. dairy and poultry access.

U.S. Commerce Secretary Wilbur Ross is joining the trip, which will include announcements of commercial transactions in the energy and defence sectors, the officials said.

The United States is India`s second-largest trade partner after China, and bilateral goods and services trade climbed to a record $142.6 billion in 2018. The United States had a $23.2 billion goods trade deficit in 2019 with India, its 9th largest trading partner in goods.