Entry gates of Taj Mahal will be closed at 11:30 am for vistors due to security reasons of US President Donald Trump. 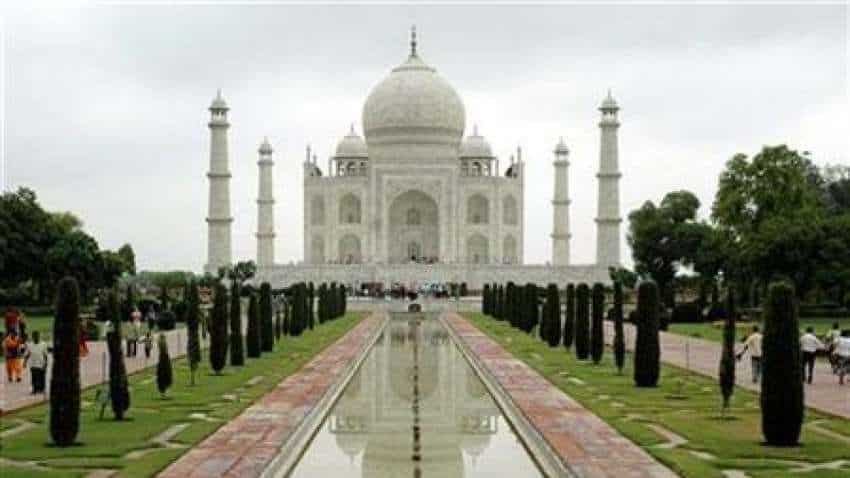 The monument, built over a period of nearly 20 years by Mughal Emperor Shah Jahan, is being refurbished to welcome the American president and the First Lady. Photo:Reuters
Written By: PTI
RELATED NEWS

Hours before the visit of US President Donald Trump to Agra on Monday, the entry to the Taj Mahal will be closed to visitors in view of high security arrangements, top officials.

According to Agra DM Prabhu N Singh, Trump is scheduled to arrive at the Taj Mahal complex at 5:15 pm and will spend about an hour at the famed 17th century mausoleum.

"People can visit the Taj in the morning but tickets will be issued till 11:30 am, and by noon or so the premises will be cleared of visitors in view of the high security arrangements for President Trump's visit," he said on Sunday.

In the last few days, tourism offices in Agra have been flooded with phone calls from people from all parts of the country, asking if the monument would be open on Monday.

"People who are not in Agra, may not know full details about the security arrangements, so they are calling," an official of the Tourism Department office at the Agra Cantonment station said.

The 17th century monument, built over a period of nearly 20 years by Mughal Emperor Shah Jahan in memory of his wife after her death in 1631, is being refurbished to welcome the American president and the First Lady, Melania Trump.

An ASI official said the World Heritage Site of Agra is also getting ready to welcome Trump just like the city is being decked up for his visit in the evening.

"The red sandstones of the Taj complex are being cleaned of stains, fountains have been spruced up and extra stock of shimmering flowers added in gardens to enhance the glory of the monument," ASI Agra Circle's Superintending Archaeologist Vasant Swarnkar said.

Taj Mahal, considered one of the seven wonders of the world, stands on the bank of the Yamuna river, and is always high on the itinerary of visiting heads of state.

In 2015, the then US President Barack Obama was scheduled to visit the monument during his India visit. It is said that he could not do so due to security reasons.

In 2000, then President Bill Clinton along with his daughter Chelsea Clinton had paid a visit to the famed monument.

The monument, which earned the UNESCO World Heritage tag in 1983, has some wonderful specimens of polychrome inlay art both in the interior and exterior on the dados, on cenotaphs and on the marble jhajjhari (jali-screen) around them, according to the ASI.

It is one of the most photographed sites in the world.