Tripura, Nagaland, Meghalaya election results: The BJP, which was hitherto a marginal player in Tripura politics, having failed to clinch even a single seat in the state in the last polls, has already won a majority on its own, pocketing 32 seats in the 60-member Assembly. It was leading in three more seats 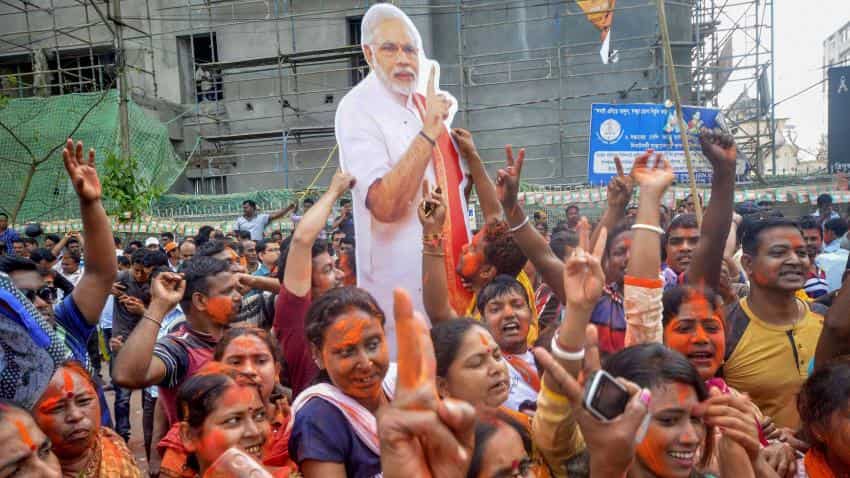 Tripura, Nagaland, Meghalaya election results: Elections were held in 59 seats in all three states due to different reasons despite them having 60-member assemblies. Image source: PTI
Written By: ZeeBiz WebTeam
RELATED NEWS

The BJP today demolished the communist citadel of Tripura, winning a two-third majority with ally IPFT and ending 25 years of uninterrupted rule of the CPI(M)-led Left Front. The saffron party, which did not have even a single councillor in all of Tripura, had secured less than two per cent votes in the 2013 polls. In Nagaland, though the BJP-NDPP alliance failed to secure a majority with the state throwing up a hung Assembly, the party's participation in the future government looks certain. The ruling NPF, which emerged as the single largest party, extended invitation to the BJP join the new dispensation, though the BJP-NDPP combine may be able to form a government with help from smaller parties like NPP, JD(U) and an independent.

Meghalaya too gave a fractured verdict with the ruling Congress as the single largest party with 21 seats, nine short of a simple majority. All three states have 60-member assemblies but polling was held for 59 seats each due to various reasons.

The BJP-IPFT combine scripted history as the combine won 43 seats. The CPI(M) won 16 seats and the Congress none. The elections in 59 seats in the 60-member Assembly were held on February 18. Polling was countermanded in one seat due to the death of a CPI(M) candidate.

The BJP with a tally of 35 seats won the majority on its own, while its alliance partner the Indigenous People's Front of Tripura (IPFT) bagged eight seats, according to the Election Commission (EC) sources.

The saffron party inflicted a humiliating defeat on the Left Front, which had never faced such a situation, even when it had lost power in 1988 to the Congress-Tripura Upajati Juba Samity combine.
The BJP's spectacular performance came as a surprise for many as the saffron party did not even have a councillor in Tripura.

It had secured less than two per cent votes in the 2013 Assembly election in the state. According to an EC source, the BJP, which contested in 51 seats in Tripura, has secured over 43 per cent of the votes.

Among the winning candidates in the BJP are Biplab Deb, its state unit president. The state unit vice-president Subol Bhowmick, however, lost to the Left. Its ally IPFT, which fielded candidates in nine seats, got nearly eight per cent votes.

The CPI(M)-led Left Front, which had captured 50 of the 60 seats in the 2013 Assembly polls, managed to secure nearly 42.7 per cent this time, the EC source said. The Left Front had lost in 1988 Assembly polls to the Congress-Tripura Upajati Juba Samity combine by just one seat.

The Congress had a disastrous performance in the state as it failed to win any seat. Its vote share dipped to less than two per cent, the EC source said. The Congress had won 10 seats in 2013 Assembly election. Six of its MLAs had deserted the party in 2016 and switched over to Trinamool Congress and subsequently joined the BJP last year.

Another Congress MLA Ratan Lal Nath had also joined the BJP two months before the Assembly election and was disqualified by the Assembly speaker under the anti-defection law. BJP leader Ram Madhav said that the people in the state have voted for a change. "They have supported our slogan for change," he said, adding that the CPI(M) gave a "spirited fight".

BJP in-charge in Tripura and Assam minister Himanta Biswa Sarma said, "People were fed up with the Manik Sarkar government which has been ruling the state for more than two decades and wanted to get rid of the CPI(M) rule." He also said the BJP's alliance with the tribal dominated IPFT has also helped the saffron party.

On the poll outcome, CPI(M) general secretary Sitaram Yechury said, "Tripura voters have given their mandate for a BJP-IPFT government in the state. We thank the people of Tripura for giving us the opportunity to serve them for the past 25 years." He said that CPI(M) would continue to oppose the BJP and its "divisive agenda" not only in Tripura but throughout the country. He alleged that the BJP has used both "money and muscle power in Tripura".

Journey from no one to number won: Modi

Addressing BJP workers at the newly constructed party headquarters in the national capital, Prime Minister Narendra Modi said, "It is a journey from no one to number won, from 'shoonya to shikhar' (zero to top)," referring to the giant leap of the party in the Northeast. The BJP is already in power in Assam, Manipur and Arunachal Pradesh.

"This journey from 'Shunya' to 'Shikhar' (zero to the top) has been made possible due to a solid development agenda and the strength of our organisation. I bow to every BJP karyakarta for working assiduously on the ground for years," the prime minister said, adding that people are reposing faith in the positive and development oriented agenda of the NDA.

He further said, "People do not have the time or respect for negative, disruptive and disconnected politics of any kind."

Though the BJP secured a majority on its own in Tripura, winning 35 seats, Amit Shah told a press conference in the national capital that it will form government with ally Indigenous People's front of Tripura (IPFT), which won eight seats. The CPI(M)-led Left Front could manage just 16 seats.

Though the ruling Congress emerged as the single largest party in Meghalaya, it failed to secure a majority, winning 21 seats. The party could not open its account in Tripura and Nagaland.

The BJP could win just two seats in Christian-dominated Meghalaya, but its North-East Democratic alliance partner National People's Party clinched 19. Together they equal the Congress's tally.
Smaller parties that won 13 seats and three independents would play a decisive role in government formation.

Senior Congress leader Kamal Nath, who was despatched to Shillong to explore ways of forming a Congress-led government, said the party had the support of MLAs necessary to prove majority on the floor of the Assembly.

Nagaland also gave a fractured verdict with no party or pre-poll alliance having a majority. The BJP got an informal invitation from NPF leader and Chief Minister T R Zeliang to join the new government. The NPF, is the single largest party in the House with 27 seats. The BJP-NDPP combine has also won 27 seats and are leading in one each.

The NPP of Conrad Sangma, a North-East Democratic alliance partner of the BJP, has won two seats, and Bihar Chief Minister Nitish Kumar's JD(U) one. If the BJP-NDPP alliance wins the two seats where their candidates are leading, its tally would go up to 32, two more than the magic figure of 30.

The BJP had parted ways with the NPF just ahead of the polls and joined hands with the newly launched NDPP of three-time former chief minister Neiphiu Rio, also an old Naga People's Front hand.

Zeliang, the NPF leader, said his party continued to be a part of the North-East Democratic alliance led by the BJP and hoped the saffron party will form the new government with it.

"We have not parted with the alliance. I hope BJP will join our government. I will welcome it if they join us. The BJP has two ministers in my cabinet," he told NDTv.

Though there was no official word from the BJP on whether it would be a part of the NPF-led government, Shah had told a press conference in New Delhi that the number of states under the saffron party's belt has gone up to 21 from 19.