Biplab Deb is the likely chief ministerial pick for Tripura, according to party sources. BJP and its ally have surged ahead of the Left Front in Tripura establishing a lead in 37 seats, while the Congress was ahead in Meghalaya, according to Election Commission sources 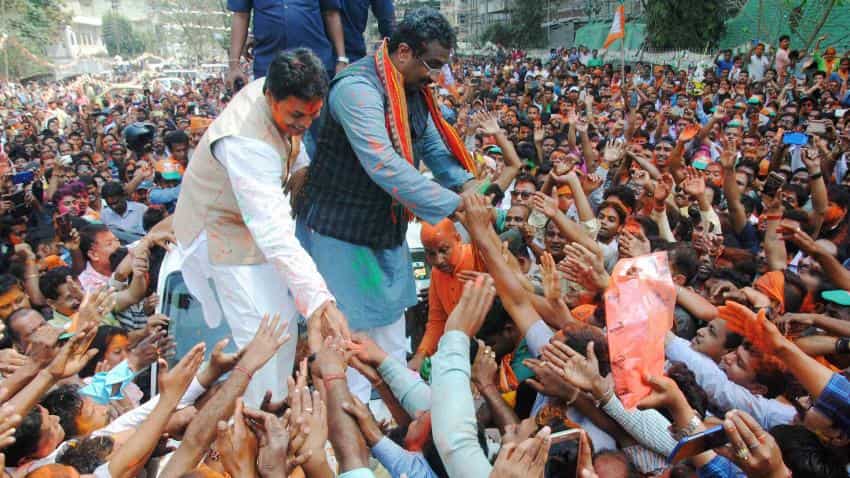 Tripura, Nagaland, Meghalaya election results 2018: The Bharatiya Janata Party (BJP) is continuing to generate big election wins in the northeast where it once was not present at all. This has been the result of Prime Minister Narendra Modi bestowing special attention to the region and targetting the Congress and Left dominance in the region. While BJP has successfully taken over Assam in the last state poll held there, and today it is set to win Tripura today. BJP President Amit Shah has been touring the states in the region regularly to boost morale of partymen.

The BJP and its ally IPFT were set to end the Left Front's 25-year-rule in Tripura with a strong showing in the Assembly polls, while Meghalaya seemed to be headed for a hung House. In Nagaland, a close finish was on the cards, according to available trends.
The BJP-Indigenous People's Front of Tripura (IPFT) alliance captured six seats in Tripura and was leading in 35 seats, according to an EC source. The BJP and IPFT won three seats each. The saffron party was leading in 30 seats and the IPFT was ahead in five seats.

The CPI(M) won one seat and was leading in 17 seats. Chief Minister Manik Sarkar was ahead in Dhanpur seat while the BJP state president Biplab Kumar Deb was leading in Banamlipur. Election in 59 seats for the 60-member Assembly was held on February 18. Polling was countermanded in one seat due to death of a CPI(M) candidate.

Commenting on the trends in three states, Union minister Kiren Rijiju said that they indicated a new political direction which would have an effect on national politics as well.
"We are confident of forming government in all three states", he said.

BJP leader Ram Madhav said, "Seeing the early trends, I feel that in Tripura BJP is going to do very well. In Nagaland too, our alliance is doing very well and Congress is trailing in Meghalaya".
"The results of North East are going to be very good for BJP", he said.

With the BJP on the cusp of ending the Left Front's 25-year-rule in Tripura, state party chief Biplab Kumar Deb today said he was ready to take on the mantle of chief minister, but a decision on it would be taken by the party's highest decision making body, the Parliamentary Board.

Ready to be CM, but BJP Par Board will take final call: Biplab Deb

Deb, a gym instructor-turned-politician, thanked the people of Tripura for their overwhelming support and credited Prime Minister Narendra Modi and BJP chief Amit Shah with the party's showing.

"I am ready to take the responsibility. I will not run away from taking any responsibility," he told reporters here when asked if he would accept the task of chief ministership.
However, the BJP leader said a final decision on the next chief minister of Tripura would be taken by the BJP Parliamentary Board, which would meet in New Delhi in the evening.

Deb said the people of Tripura favourably responded to the BJP's call to root out the CPI-M government, which has been ruling the state for more than two decades.
"People responded favourably to our call 'Chalo Paltai' (Let's Change)," he said.

Deb said the next government's priority would be all-round development of Tripura and people voted for the BJP as there had been total backwardness in the state under the Manik Sarkar government.

"The word development does not exist in the dictionary of the CPI-M. Our government will provide good governance and time-bound implementation of all developmental works," he said.
Sarkar has been chief minister since 1998. He is a politburo member of the CPI-M and has been ruling the state for the fourth consecutive time.
Elections in 59 seats, out of the total 60, were held on February 18. The poll in one seat was countermanded due to the death of the CPI-M candidate.