Tripura election result 2018:  The BJP's strong showing came as a surprise  for  many as the party did not even have a councillor in Tripura. It had secured less than two  per cent  votes in the 2013 Assembly election in the state 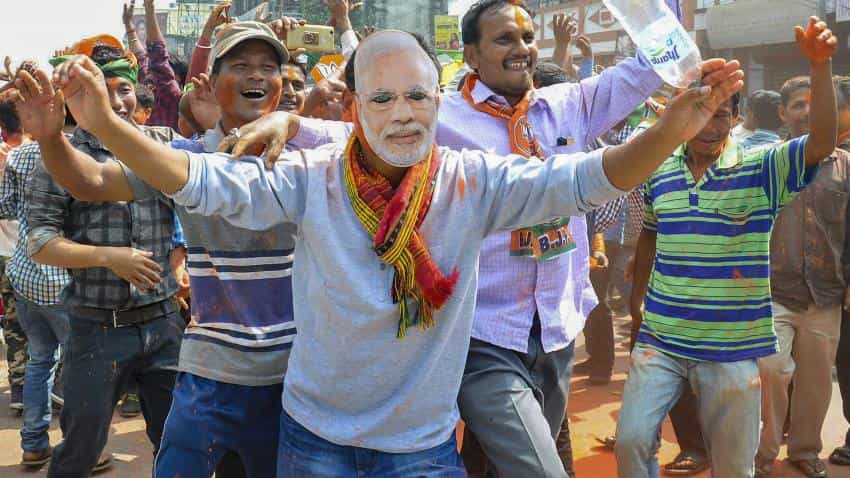 Tripura election result 2018: Among the winning candidates in the BJP were Biplab Deb, its state unit president. Its ally IPFT, which fielded candidates in nine seats, got nearly 8 per cent votes. Image source: PTI
Written By: PTI

Tripura election result 2018: The BJP-IPFT combine scripted history today by winning the Tripura Assembly polls, ending 25 years of uninterrupted rule of the CPI(M)-led Left Front in the state. The party captured 23 seats on its own while its alliance partner the Indigenous People's Front of Tripura (IPFT) bagged 7 seats, giving the combine a majority in the House, according to Election Commision (EC) sources.

The elections in 59 seats in the 60-member Assembly were held on February 18. Polling was countermanded in one seat due to the death of a CPI(M) candidate. The BJP is also leading in another 12 constituencies and the IPFT in one. The saffron party inflicted a humiliating defeat on the Left Front which had never faced such a situation even when it had lost power in 1988 to the Congress-Tripura Upajati Juba Samity combine.

The BJP's strong showing came as a surprise for many as the party did not even have a councillor in Tripura. It had secured less than two per cent votes in the 2013 Assembly election in the state. According to an EC source, the BJP, which contested in 51 seats in Tripura, has secured over 42 per cent of the votes.
Among the winning candidates in the BJP were Biplab Deb, its state unit president. Its ally IPFT, which fielded candidates in nine seats, got nearly 8 per cent votes. On the other hand, the CPI(M)-led Left Front, which had captured 50 of the 60 seats in the 2013 Assembly polls, is expected to secure nearly 44 per cent this time, the EC source said.
The Left Front had lost in 1988 Assembly polls to the Congress-Tripura Upajati Juba Samity combine by just one seat.

The Congress is not expected win a single seat. Its vote share is likely to dip to slightly over two per cent, the EC source said. BJP leader Ram Madhav said that the people in the state have voted for a change.
"They have supported our slogan for change," he said, adding that the CPI(M) gave a "spirited fight".

BJP in-charge in Tripura and Assam minister Himanta Biswa Sarma said, "People were fed up with the Manik Sarkar government which has been ruling the state for more than two decades and wanted to get rid of the CPI(M) rule."
He also said the BJP's alliance with the tribal-dominated IPFT has also helped the saffron party. "Tribal votes in Tripura are around 35 per cent and they voted for the BJP lock, stock and barrel," he said.
Sarma also dismissed the suggestion that the minorities, particularly the Christians in the northeast, were against the BJP, saying the community "wholeheartedly" supported the party.

On the poll outcome, CPI(M) general secretary Sitaram Yechury said, "Tripura voters have given their mandate for a BJP-IPFT government in the state. We thank the people of Tripura for giving us the opportunity to serve them for the past 25 years."
He said that CPI(M) would continue to oppose the BJP and its "divisive agenda" not only in Tripura but throughout the country. He alleged that the BJP has used both "money and muscle power in Tripura".