Naidu and Kejriwal insisted that metro was one of the best answers to the city's commutation and pollution woes. 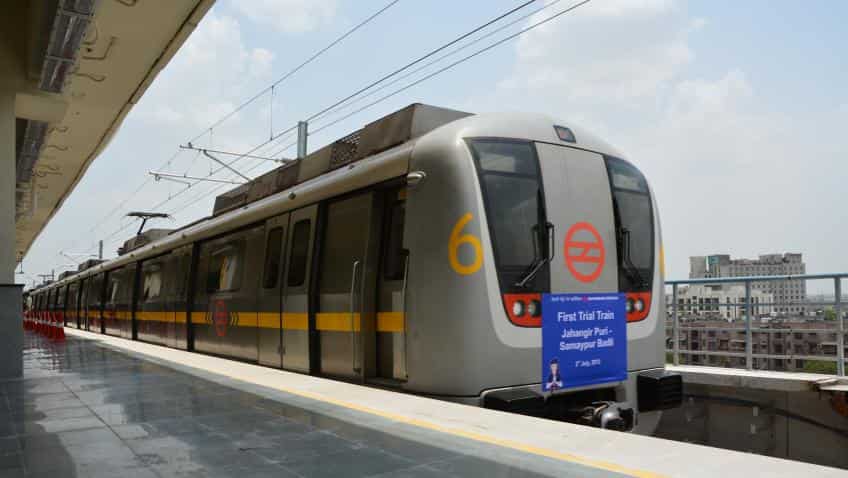 According to DMRC, during the trials, the interaction of the trains with physical infringements (civil structure) will be checked. Photo: IANS
RELATED NEWS

Social distancing: Delhi Metro is looking to beat the coronavirus, gets battle-ready this way

The trial run of Delhi Metro's swanky new 'driver-less' trains began on Tuesday, setting the ball rolling on what promises to be a technological feat in the country's public transport system in little more than a year, when they will run on 'unattended' mode.

In their speeches, Naidu and Kejriwal insisted that metro was one of the best answers to the city's commutation and pollution woes. Kejriwal thanked the Centre and termed DMRC as a 'unique example' of cooperative federalism.

Naidu said that odd-even was a temporary measure and "cannot be a permanent solution" and said new technology was set to increase metro's frequency to 90 seconds.

"As we kept on saying during odd-even, till the time we don't improve our public transport system, one that which inspires car owners to move opt for public transport, pollution or congestion will not come down," Kejriwal said.

Trial run of trains, that were unveiled last month, will take place between the depot and Majlis Park station, one of the terminal stations of the upcoming Pink Line, for the next few days. Gradually the distance covered by them will be increased, a metro official said.

The new trains will undergo rigorous trials to ensure that they are ready for smooth operations after the commissioning of the 58-km-long Mukundpur- Shiv Vihar and the 34-km-long Janakpuri (West)- Botanical Garden corridors , by the end of this year, although initially, train operators will run them.

"Gradually, driver-less operations, on the Unattended Train Operation (UTO) mode, will be possible and later on, in stages, the new signalling technology Communication Based Train Control (CBTC) - will be implemented which will bring the time gap between to two trains to 90 seconds instead of the current average of two minutes," an official said.

Naidu said that DMRC has been asked to carry out a comparative study of metro systems across the world and suggest ways to improve the Delhi Metro's efficiency and also took a jibe at demands by various states to build metro.

"I discussed with Arvind ji about experience of metros across the world, their frequency, expenditure, speed, and volume of passengers they carry. DMRC have been asked to carry out a preliminary study and then we will sit with the CM and take steps in that regard as metro is a costly affair. It goes up to 400 crore per km. Demanding metro's has become a fashion these days," Naidu said.

According to DMRC, during the trials, the interaction of the trains with physical infringements (civil structure) will be checked to ensure that there is no physical blockage during the movement of the train on the track.

There will be a two way communication between Operation Control Centre (OCC) and the train. Their starting and stopping, acceleration and braking, operation of doors and handling of emergencies are fully automated which will not require any on board staff.

"Obstruction Deflection Device (ODD) is installed to push away small obstructions on track to avoid derailment. There are two front facing cameras to prevent suicides and one detrainment camera," the metro said.

The Ministers also inaugurated a Receiving Sub Station (RSS) at the depot which will cater to the power requirements of the Majlis Park Shiv Vihar corridor. It has been designed entirely as a green building.

DMRC has drafted a solar policy under which it aims to generate 20 MW power by 2017 and 50 MW by 2021. It has already commissioned 6.3 MW and has awarded contracts for another 20 MW.

The company is also planning to install offsite plant of 500 MW capacity to run all its operations and not depend on other sources, Naidu said and said that the Centre was drafting a law under which projects without provision of rain water harvesting will not be approved.

"Municipal corporations across the country will be issued orders in this regard. We are reducing man to man contact to reduce corruption and moving applications and other processes online," he said.

Social distancing: Delhi Metro is looking to beat the coronavirus, gets battle-ready this way