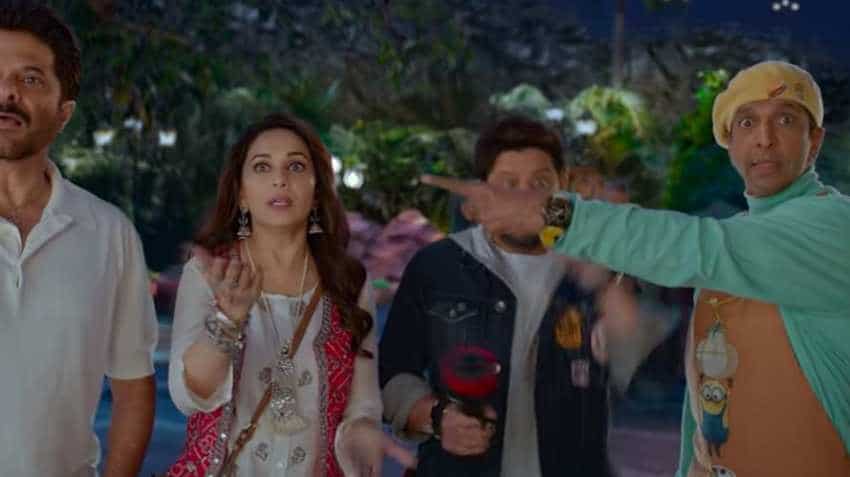 Total Dhamaal box office collection day 9: It is expected that the movie will earn well at the box office on second Saturday and Sunday. Image source: Screen grab from trailer

Total Dhamaal box office collection day 9: The Indra Kumar-directed film is now very close to enter the coveted Rs 100-crore club. The comedy film has so far earned Rs 99.30 crore in India business. It is expected that the movie will earn well at the box office on second Saturday and Sunday.  A curious amalgamation of the new and old generation - Anil Kapoor, Madhuri Dixit, Ajay Devgn, Arshad Warsi, Riteish Deshmukh, and Sanjay Mishra - Total Dhamaal has won over the audience by offering a complete entertainment package.

In the overseas markets too, the film is raking in the moolah, which is in contrast to the performance of other films in this genre. Its total count may go up when the latest numbers arrive. Despite fewer multiplexes are running the film and two significant releases, the film is showing no sign of slowing down. The film earned Rs 4.75 cr on Friday at the box office.

The Indra Kumar-directed film has created a 'dhamaal' despite two films were released yesterday - Laxman Utekar directorial Luka Chuppi; and Sushant Singh Rajput, Manoj Bajpayee and Bhumi Pednekar-starrer Sonchiriya. The collection during the weekends and the next week will give an indication whether it will touch Rs 150-crore mark in India collection.