Govindbhai Patel and eight members of his village in Sabarkantha district, around 70 km from here, reached Ahmedabad early morning and stood in a queue along the Sabarmati riverfront and waited for the convoy to arrive. 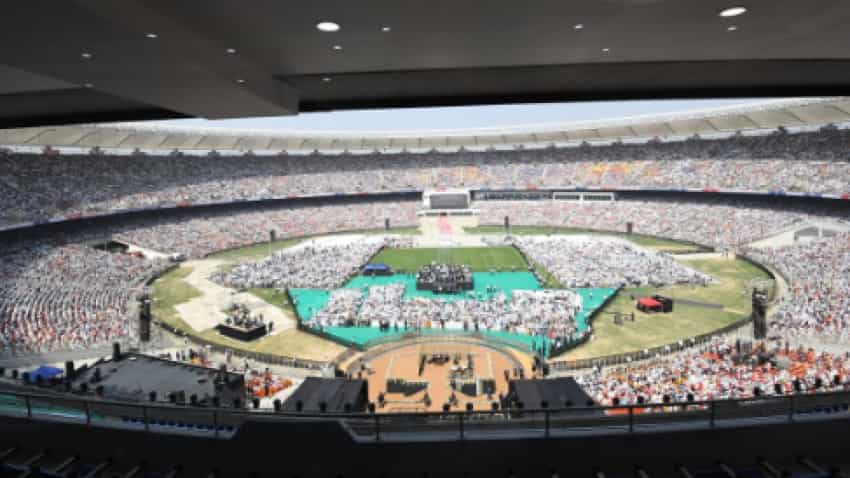 Waving Indian and US flags and Shouting slogans, thousands of people lined up the 22-km-long roadshow route US President Donald Trump and his wife Melania took to reach Motera stadium for the 'Namaste Trump' event.

Many people, including students, from Ahmedabad and different parts of Gujarat arrived here since morning for the spectacle of the "India Road Show" as troupes showed cultural performances.

Many were left disappointed after being refused entry to the Motera stadium for want of passes. But they took solace in standing along the road to catch a glimpse of the leaders.

Authorities had earlier said over one lakh people were expected to line up along the roadshow route.

Artistes from almost all states performed during the roadshow. Separate stages for each state were erected at regular distance on the route.

Wearing traditional costumes, artistes from different states performed on these 30-odd stages and greeted the VVIPs when they passed from the route.

Govindbhai Patel and eight members of his village in Sabarkantha district, around 70 km from here, reached Ahmedabad early morning and stood in a queue along the Sabarmati riverfront and waited for the convoy to arrive.

Modi's convoy arrived first at the Sabarmati Ashram, followed by that of Donald Trump, with the US President and his wife sitting in the Cadillac armoured limousine, called The Beast. From the Ashram the convoy then proceeded to Motera stadium.

"We came here from our village to catch a glimpse of both Modi and Trump. I stood for three hours, but the wait was worth it," Patel said. "One rarely gets to see a thing like this," he said.

Rakshaben Kansara, who came here with three family members from Anand town, around 80 km from here, was left disappointed when she was not allowed inside the stadium as they did not have a valid pass.

"We were not allowed inside the stadium, so we walked, and took auto rickshaw wherever possible to reach Sabarmati Ashram, thinking we may catch a glimpse (of Trump) there," she said.

She had to be content watching the "Namaste Trump" event on a large screen erected outside Sabarmati Ashram.

People gathered around screens placed at various locations on roadshow route to watch live streaming of the Namaste Trump event.

Despite sweltering heat, people gathered in large numbers along the roadshow route, wearing white caps with "Trump India Roadshow" and pictures of India and US flags on them. These caps and flags and breakfast were distributed to them along the route.