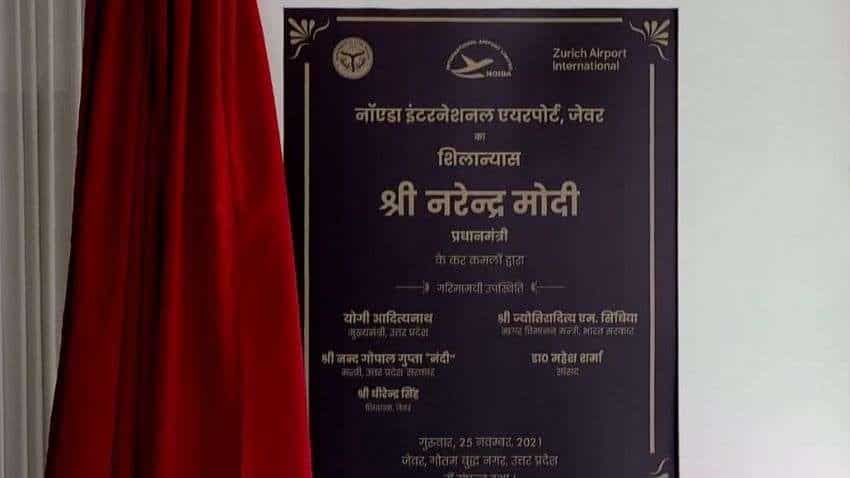 Thousands of people, including women and children, on Thursday gathered at Jewar amid heavy security to watch Prime Minister Narendra Modi lay the foundation stone for the Noida International Airport.

The Greenfield airport, which will be built near Delhi in western Uttar Pradesh, is billed to be India's largest upon completion.

Heavy security has been deployed at and around the event venue. Visitors are being frisked before entering the 'jan sabha' area, officials said, adding that the police have banned black flags.

Besides locals, thousands of people from Bulandshahr, Ghaziabad, Mathura, Hathras, Aligarh and Agra arrived at Jewar on tractors and motorcycles.

As the people waited for the prime minister to arrive at the venue in the afternoon, many young men tried to climb up the poles fixed at the 'jan sabha' hall for hanging loud speakers.

BJP leader and Jewar MLA Dhirendra Singh, who is credited to have played a key role during negotiations with farmers over land acquisition, led a convoy of hundreds of supporters to the venue.

The MLA himself drove a tractor as a number of people on motorcycles, cars, tractors and buses followed him to the event site, where personnel of the Central Reserve Police Force, Rapid Action Force and Provincial Armed Constabulary, besides the police were deployed.

"Police Commissioner Alok Singh on Wednesday held a meeting to review the security preparations for the programme. All police officials were briefed and directed not to allow any visitor carrying firearms, liquor, or black flags, etc to the venue," a police spokesperson said.

"Security personnel deployed at entry points have been directed to not allow any person without frisking. All officials were told to reach for duty four hours prior to the event and stay till 6 pm," the spokesperson said.

The first phase of the project is spread over 1,300 hectares and would cost more than Rs 10,000 crore, the officials said, adding that it is expected to be ready by October 2024.