The helmet promoting the Made in India campaign with ISI mark comes for Rs 1,500. Coffee mugs are priced at Rs 65, while bangles, chains and lockets range between Rs 35 to Rs 65. 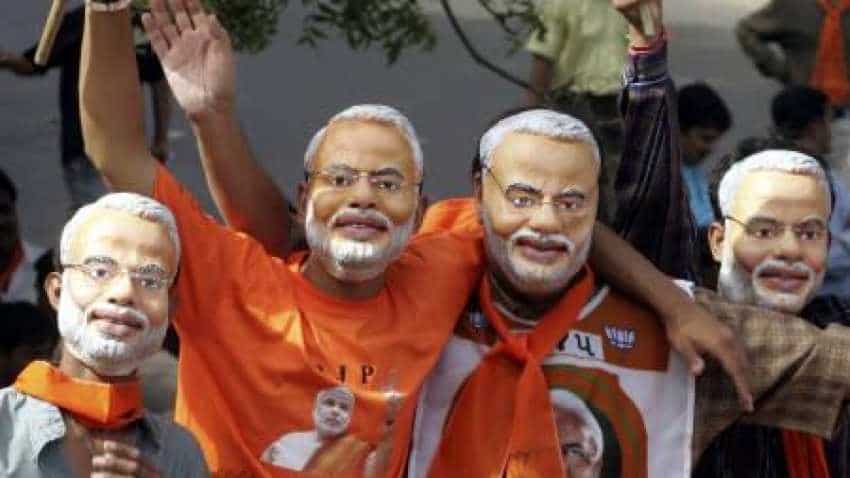 The sole idea behind launching this initiative is to promote the branding of the BJP.. Photo: Reuters
Written By: IANS
RELATED NEWS

With an eye on the upcoming general elections, the Rajasthan BJP headquarters here set up a one-stop shop to promote Brand Modi with a range of accessories including helmets, stoles, glasses, bangle-sets, hair clutches, coffee mugs, chains, lockets and broaches with a saffron background and bearing Prime Minister Narendra Modi's image.

"This creative experiment is being tested for the first time in the state of Rajasthan. The sole idea behind launching this initiative is to promote the branding of the BJP. Although the Delhi office has one such shop, the choices are greater in Rajasthan. As of now, there is no such one-stop-shop anywhere else in India," party spokesperson Vimal Katiyar told IANS.

"The helmet promoting the Made in India campaign with ISI mark comes for Rs 1,500. Coffee mugs are priced at Rs 65, while bangles, chains and lockets range between Rs 35 to Rs 65," Shyam Rajesh Gupta, who manages the shop, told IANS.

There are even posters and cutouts of Modi priced between Rs 300 and Rs 1,000. Quite naturally, these are placed in the shop's frontage.

"Our creative department has endorsed the idea of displaying this diverse variety to make a difference (for the party)," he added.

The products have been sourced from different parts of the country. For example, the bangle-sets have been procured from Gujarat.

"We are not earning any profit from here. The total cost of the products has been finalised after including GST and the expenses incurred in their procurement. However, no profit margin has been kept," Gupta explained.

"The shop is drawing a good response even though it hasn't been officially launched. We plan a grand inaugural ceremony either by state BJP president Madanlal Saini or the state Lok Sabha in charge Prakash Javadekar either on March 8 or 9, depending upon the availability of either of the two," Katiyar said.