These are the two things that PM Modi gifted Netanyahu of Israel; see pictures 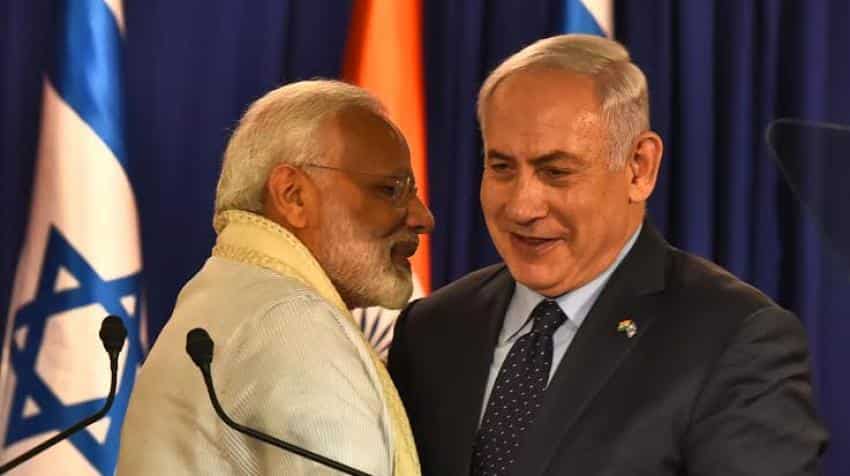 Prime Minister Narendra Modi, who is on a state visit to Israel, presented Prime Minister of Israel Benjamin Netanyahu replicas of 2 sets of relics from Kerala that are regarded as key artifacts in the long Jewish history in India.

"They comprise two different sets of copper plates that are believed to have been inscribed in 9-10th century C.E," a government statement said.

"The first set of copper plates is a cherished relic for the Cochini Jews in India. It is regarded as a charter describing the grant of hereditary royal privileges and prerogatives by the Hindu King, Cheraman Perumal (often identified as Bhaskara Ravi Varma) to the Jewish leader Joseph Rabban," it said.

According to traditional Jewish accounts, Joseph Rabban was later crowned as the Prince of Shingli, a place in or equated with Cranganore. Cranganore is where Jews enjoyed religious and cultural autonomy for centuries, before they moved to Cochin and other places in Malabar. Local Jews once placed in each coffin a handful of earth from Shingli/Cranganore that was remembered as a holy place & a “second Jerusalem”.

The replica of these plates was made possible with the cooperation of the Paradesi Synagogue in Mattancherry, Kochi.

The second set of copper plates is believed to be the earliest documentation of the history of Jewish trade with India. "These plates describe the grant of land and tax privileges by the local Hindu ruler to a church and oversight of trade in Kollam to West Asian and Indian trading associations. West Asian association included Muslims, Christians, Zoroastrians, as also a group of Jews who signed in Judeo-Persian and possibly also in Arabic and Pahlavi (Middle Persian). The plates bear their signatures that appear to have been cut into the plates by a local workman unfamiliar with the script. The replica of these plates was made possible with the cooperation of Malankara Mar Thoma Syrian Church in Thiruvalla, Kerala," it said.

And a metal crown covered in gold sheets in floral ornament style, bearing motifs typical of lamps and decorations of south India. (2/2) pic.twitter.com/KWNXltBYBY

In addition, Prime Minister also presented PM Netanyahu a Torah scroll donated by the Paradesi Jewish community in Kerala.Handwritten over a hundred years ago, the scroll had been dedicated to the Paradesi Synagogue in Kochi that had been built in 1568. The Torah is enclosed on wooden staves in a wooden case adorned with silver sheets and a metal crown covered in gold sheets in floral ornament style, bearing motifs typical of lamps and decorations of south India.