In a country where millions of people go hungry every day, a retired IPS officer has come up with an initiative to feed the needy. The initiative, called 'Roti Bank', collects leftovers from restaurants, clubs and parties in Mumbai, stores it in vans and distributes it to the poor before the food gets stale. 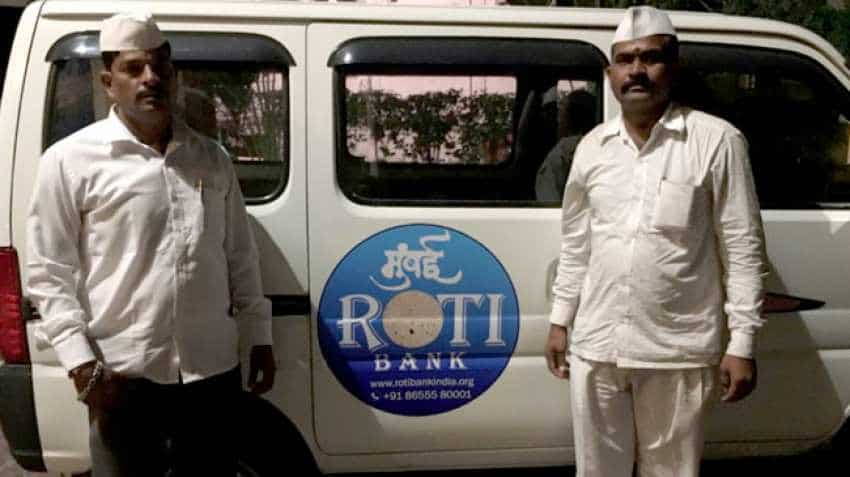 Dabbawalas say they act as a link between "food wasters and seekers". Image source: rotibankindia.org
Written By: PTI

In a country where millions of people go hungry every day, a retired IPS officer has come up with an initiative to feed the needy. The initiative, called 'Roti Bank', collects leftovers from restaurants, clubs and parties in Mumbai, stores it in vans and distributes it to the poor before the food gets stale. Launched by Maharashtra's former Director General of Police D Sivanandan in December last year in collaboration with the Mumbai's famous tiffin carriers 'Dabbawalas', the 'Roti Bank' claims to be getting a good response.

A Mumbai-born and London-based business professional, Nitin Khanapurkar, had also chipped in to support the cause by launching a round-the-clock helpline number for it.

Nearly 1.8 lakh tonnes of food is wasted every day in India and around 20 crore people, of whom a big number is in Mumbai, go hungry, Sivanandan told PTI.

"Since legal issues restrict eateries from distributing the leftover food to outsiders, we thought of channelising it though our NGO, and I am happy to say that our initiative of 'Roti Bank' has received an unprecedented response from various quarters," he said.

"We are a food rescue organisation. We collect the leftover food from hotels and cafeterias and distribute it to the hungry people. It is a simple concept," he said.

As part of the initiative, two GPRS-equipped vans make rounds of streets near hospitals and slums to provide food to the needy people, he said.

"We have reached out to nearly 75,000 needy people in the city so far. Wherever the van passes by, it brings hope among the hungry people and their feeling after getting food is undefinable," the top cop-turned-philanthropist said.

The NGO mainly collects leftover food staples like rotis (chapati or wheat-made flat bread), rice, vegetables and dal to be distributed within 60 to 90 minutes.

"Our basic idea is to mitigate hunger of the needy people," said Sivanandan, 67, who served as the Mumbai Police Commissioner before being appointed the DGP.

To bring about a sense of benevolence among the rich class, Sivanandan encourages children from affluent families to "come and witness the joy of sharing (food)," he said, adding that mitigating hunger of the street children would help them abstain from committing crime.

Asked what prompted him to launch the initiative, Sivanandan said he got the idea from the 'No Food Waste' mission being run in Chennai to end food waste and hunger.

Dabbawalas say they act as a link between "food wasters and seekers".

"Our city has two facets - one where food is wasted in parties, restaurants and the other, where people go to bed empty stomach. We act like a chain between them," Mumbai Dabbawala Association spokesperson Subhash Talekar said.