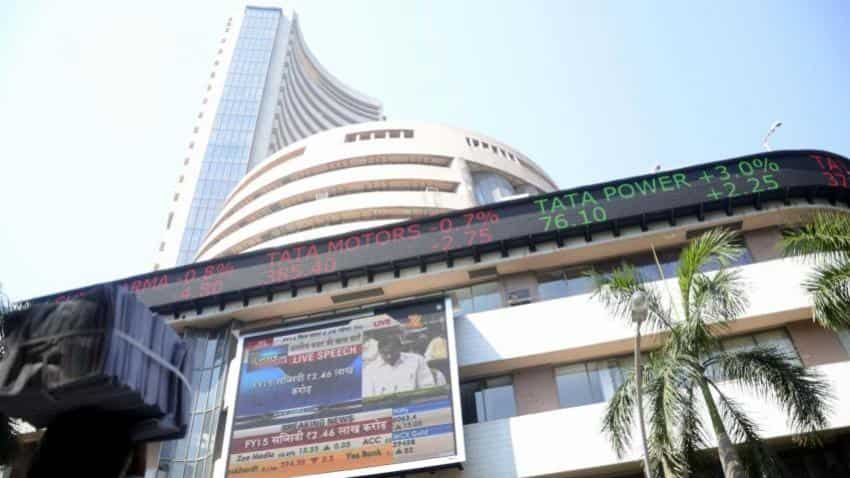 Indian benchmark indices are currently trading at a premium of 11% to its 10 year r average P/E ratio. However on Friday, the 31-scrip Sensex finished at 34,915.38 down by 187.76 points or 0.53%, while the 51-scrip Nifty 50 has finished at 10,618.25 below 61.40 points or 0.57%. According to SBICap Securities, the market, after a five week successive rally, has witnessed sell-off during the second half of the of the week due to negative global cues. The broader indices have not corrected much but the market breadth was poor largely in the favour of declines.

In a year, Sensex has given 23.98% return, whereas Nifty 50 has managed to soar by 21.19%. Interestingly, there are five stocks who have given higher return than the mentioned benchmark indices in a year, and an investor still can continue to invest in these stocks as they are tend to reach at new heights.

IIFL Research says in it’s report, “Since the market is trading at slightly premium valuations and yield spread is widening, investors should focus on longevity and follow bottom-up approach to select stocks.”

According to IIFL, one can invest in stocks like Aurobindo Pharma, JK Lakshmi Cement, NIIT Technologies, Shriram Transport Finance Ltd and UPL Limited. They are expected to rise in the range of 19% to a massive 35% in a year. IIFL has given a buy call on these stocks. 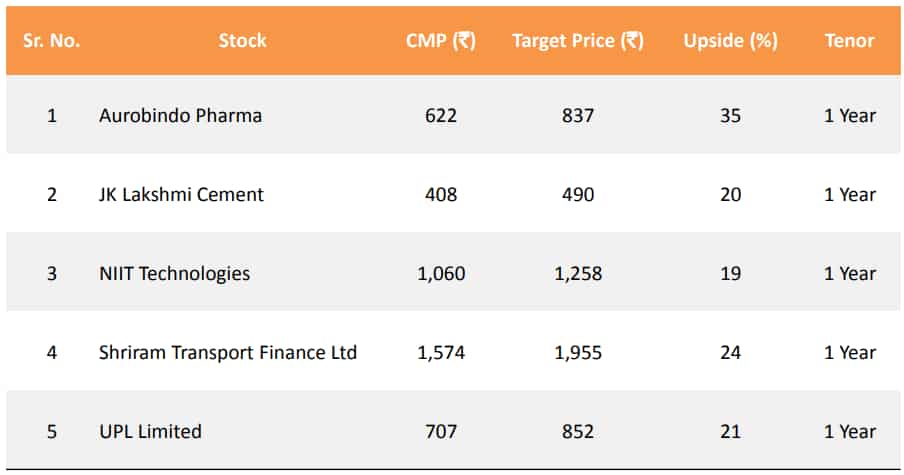 Let’s have a look on what IIFL has to say about these five companies.

Aurobindo Pharma is a vertically integrated pharma company with ~70% API demand met through captive manufacturing. In Q3FY18, US and European formulations business contributed 44% and 27% respectively, while API and other business (including ARV) contributed 18% and 11% respectively.

It had 351 ANDAs with final/tentative approvals and 114 ANDAs awaiting approvals (Q3FY18). In the recent years, company is focussing on products like injectables, penems, peptides, biosimilars and vaccines. It has also entered in lucrative OTC products in the US market. Its all facilities have clear compliance record and recent form 483 on the injectable facility (unit-IV) is not expected to escalate to adverse regulatory action.

JKLC is predominantly present in relatively healthier demand regions (north and east), primarily aided by government spending on infrastructure and housing for all. It has a total capacity of 10.9mtpa and is expected to reach 11.5mtpa by FY19E end.

Moreover, JKLC is one of the most cost effective cement players with 100% captive power. It has commissioned the 7MW WHRS at Durg plant in Q3FY18, which is expected to result in immediate saving of `70-80/tonne. Further, company is adding another 20MW CPP at its eastern unit by Q3FY19 end, which would save another ~`100/tonne from FY20E onwards.

IIFL estimates revenue CAGR of 15.4% (volume growth of ~11%) and EBITDA margin improvement by ~340bps over FY18-20E led by (a) exposure to the high growth regions, (b) capacity expansion and (c) various cost saving initiatives (primarily in eastern markets through railway siding, WHRS, CPPs, etc.). PAT CAGR is anticipated at 67.1% over the same period.

The company focus on enhancing deal pipeline (targets one deal per quarter) and external hires from global MNCs to maintain momentum in Digital would aid revenue CAGR of ~12% over FY18-20E.

Cash generation has improved on account of DSO declining by 20 days yoy to ~70 days in Q3FY18. Moderation in capex and lower Indian business contribution would further enhance cash generation.

NIIT Technologies in-line with other mid-cap IT companies like Hexaware and Mindtree, and therefore IIFL gives a buy call on the stock price. It has gained by a massive 156.96% in a year with an high of Rs 1,189.60 per piece.

STFL is the largest financier of Commercial Vehicles (CVs) in India with AUM of Rs 95,300 crore as of March 2018. The company enjoys a large market share of ~25% in used CV financing and ~6% in new CV financing segment. IIFL forecast an AUM growth of ~23% over FY18-20E.

Strong AUM growth, sharp recovery in earnings and EPS trajectory and RoE improvement will drive further re-rating in the stock. Underlying trends for the vehicle finance sector are strong.

UPL is the largest generic agrochemicals company in India with a market share of ~20% and amongst the world’s leading agro-input players. Its agro activities segment forms a large portion of revenue (~96% of FY18 consolidated revenue) led by herbicides (44 products) and fungicides (27 products).

According to IIFL, it focus on off patent products would provide an opportunity worth ~US$3bn of patents expiring by FY21. This would be a key enabler to compete with global players and increase market share.

Going ahead, herbicides usage is expected to increase in India on account of rising costs of labour and genetically modified crops. UPL’s product presence in mid-west US (~40% US agrochemical market) and new launches in southern Europe would double the contribution from these regions over next 5 years.

Further, hike in agrochemical prices backed by normal monsoon forecast and lowering channel inventory in Latin America would lead to EBITDA margin expansion by ~50bps over FY18-20E. IIFL expect revenue and PAT CAGR of 13% and 20% respectively over FY18-20E.

UPL’s stock price has provided return of 33.61% in one year to investors, by earmarking an high of Rs 902 per piece.

From the above data, it can be said that currently these companies are trading at lower-level from their potential high which makes even more better for buying the stocks.

In case if you plan to make investment in equity markets, then you may want to have a look at the above mentioned companies to enjoy better returns.