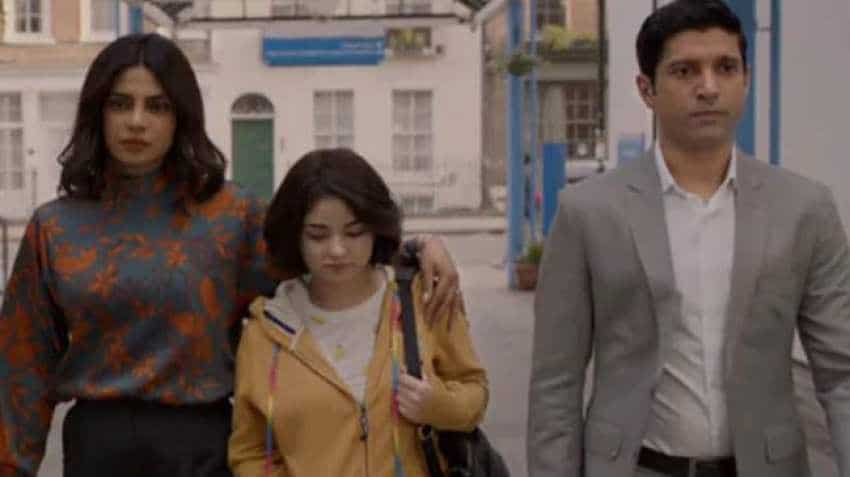 The Sky is Pink box office collection: Priyanka Chopra and Farhan Akhtar starrer film received a low key response at movie theatres across the country, and could collect Rs 2.50 crore on the first day of release, according to reports. The film, directed by Shonali Bose, is based on the life of motivational speaker Aisha Chaudhary, marking Priyanka Chopra's return to Bollywood after a gap of three years. It, however, failed to elicit audience's response on the expected lines as film trade watchers predicted Rs 4-5 crore collection on its opening day.

According to Bollywood Hungama, the film could earn Rs 2.51 crore on the opening day. The report, however, could not cite overseas collections in lack of data. The film could register occupancy of near 10 per cent in morning shows across the movies theatres in the country, say reports.

The film's starcast include Dangal star Zaira Wasim, Rohit Saraf, apart from Priyanka Chopra and Farhan Akhtar who showed their brilliant performance in lead roles. The Sky is Pink has received positive reviews from movie critics and the film also boasts of receiving a 15-minute standing ovation at Toronto International Film Festival.

According to reports, The Sky is Pink arrives nine days after the blockbuster release of the action film War, which has broken many box office records, and has earned the distinction of gaining the highest opening day collection of Rs 51.6 crore. War has already crossed the Rs 200 crore mark domestically, and the Hrithik Roshan and Tiger Shroff-starrer is stated to have been major factor in poor response extended to Priyanka-led movie.

The film is likely to show a better performance on Saturday and Sunday, but the real test will begin from Monday onwards.

Notably, The Sky is Pink is based on the love story of a couple spanning 30 years, that is related through the lens of their teenage daughter. The film also marks Priyanka's Hindi production debut.