"Thappad" is not about domestic violence, unlike what the title or pre-release promotion may have indicated. The film merely utilises a random, impulsive act of slapping to lay out an intricate portrait of marital exploitation that could be happening within the confines of any household that might maintain a picture of calm on the outside. 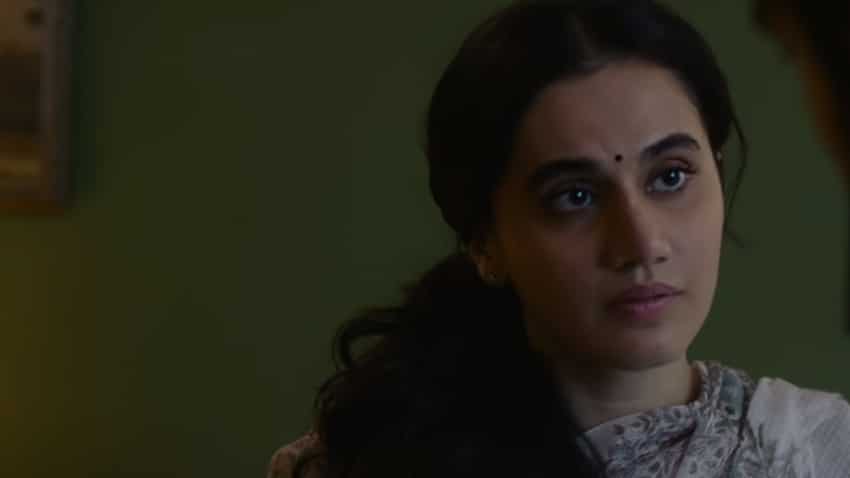 Anubhav Sinha recently declared that Thappad is meant to be the concluding feature of his `discrimination trilogy`, Photo: YouTube
Written By: IANS
RELATED NEWS

Thappad review: Anubhav Sinha recently declared that Thappad is meant to be the concluding feature of his `discrimination trilogy` -- the other two being "Mulk" (2018), which spoke of bigotry in the name of religion, and "Article 15" (2019), his manifesto on oppression on the basis of caste. "Thappad" trains focus on gender discrimination to complete the picture.

Gender can be a sensitive subject, more so if you look at it through the prism of subjugation. A conversation on the topic could easily turn into sermonising. Sinha`s biggest credit as far as "Thappad" goes is that he maintains a balance in tone, never getting overly preachy with what his narrative has to convey.

"Thappad" is not about domestic violence, unlike what the title or pre-release promotion may have indicated. The film merely utilises a random, impulsive act of slapping to lay out an intricate portrait of marital exploitation that could be happening within the confines of any household that might maintain a picture of calm on the outside.

Importantly, the film questions the male entitlement of superiority in a relationship.

Sinha and co-writer Mrunmayee Lagoo set the tone for that idea right from the early frames, long before the film`s highlight, titular act of violence actually happens. We spot it in little things that define the life of protagonist Amrita (Taapsee Pannu). It is a given, for instance, that she is the one who must wake up to turn off the alarm clock that her husband Vikram (Pavail Gulati) sets, so that he can get up on time for work. If he must work all night, she should be around to fix the printer, and she must also be there to brew the perfect cuppa for her in-laws early next morning.

For Amrita, according that advantage to Vikram would seem like a natural thing, mainly due to the superior stature of his family that is unsaid in the script and yet subtly portrayed. She is okay with the idea of being a housewife who has given up her dream of being a dancer, and is now satisfied putting her talent to use only in giving dance tuitions to the neighbour`s daughter.

Amrita`s sole purpose in life, it would seem, is to be happy and proud about the fact that Vikram is all set to be transferred by his firm to London, where he will take up a top job and they will set up home in a house with a cute blue door.

The trigger that sets off turmoil in her seemingly content life is the slap that Vikram lands on her cheek, at a house party to celebrate their London transfer, in an uncharacteristic and frustrated fit of rage.

The very brief scene, masterfully written and executed, resonates for the sheer sense of disparity it so simply conveys. You understand the deepseated chauvinism about Vikram, an otherwise sophisticated guy with a pleasant demeanour, which drives him to instinctively take umbrage when his wife tries stopping him as he enters into an aggressive showdown with a colleague at the party. Amrita, on the other hand, is expected not to make too much of the incident because, as her mother-in-law (Tanvi Azmi) says, there are guests outside waiting to be entertained.

"Thappad" digs deep to establish the fact that gender discrimination is an outcome of the upbringing that not just men, but also women, get in our country. The screenplay is quietly effective in the way it shows how the thought of saying sorry, even long afterward, never quite crosses Vikram`s mind. For Amrita, his lack of remorse sparks off the realisation that her marriage was always built on Vikram`s ego and not love.

For maximum impact, the story draws up subtexts utilising prop female characters. As Amrita decides to walk out of her marriage, we meet her lawyer (Maya Sarao). She is a successful career woman who fights for women`s rights and yet cannot escape her husband`s (Manav Kaul) brutish ways in the privacy of their posh bedroom. At the other extreme is Amrita`s domestic help, who suffers physical abuse regularly at the hands of her husband because he feels it is only right that a man beats up his wife.

If these sub plots appear too familiar while setting up a broader picture, Sinha does well to execute them with authenticity.

Yet, despite the film`s overall profundity, you get a sense that not everything about "Thappad" is perfect. The only man who seems to have a sense of gender equality is Amrita`s father (Kumud Mishra), but he does not get anything substantial to do in the film apart from being there for her. We understand Amrita`s awakening happens primarily because she is slapped in public, Does that mean she would have glossed over the issue had Vikram assaulted her in private? Also, gender equations in a marital relationship cannot always be explained in black and white. The film never quite delves into the grey areas of Amrita and Vikram`s marriage.

Still, "Thappad" resonates with impact. It is without a doubt one of the finer films you will see this year, simply because it tackles a difficult and powerful subject with credibility. A cast of proven talents excels in well-crafted roles, toplined by Taapsee Pannu`s career-defining act.