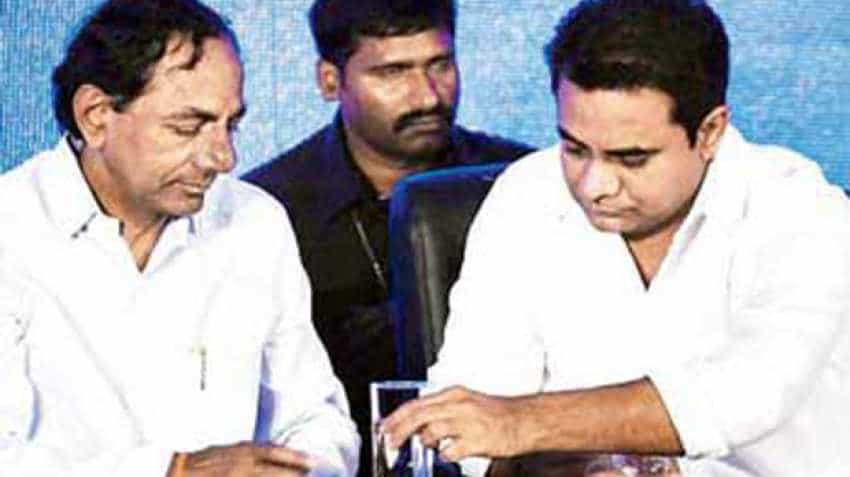 Telangana election 2018: Rama Rao and his wife have total assets of over Rs 41 crore, according to the affidavit submitted by him to the election authorities on Monday. Image source: PTI
Written By: IANS
RELATED NEWS

Telangana Chief Minister K. Chandrashekhar Rao`s daughter-in-law is richer than his son K. T. Rama Rao, a minister in his cabinet. Rama Rao and his wife have total assets of over Rs 41 crore, according to the affidavit submitted by him to the election authorities on Monday while filing the nomination for next month`s Assembly election.

While K. Shailima owns assets worth Rs 36.68 crore, her husband is only worth Rs 4.93 crore. Their daughter K. Alekhya has a bank balance of Rs 19.59 lakh. Rama Rao, considered number two in the Telangana Rashtra Samithi (TRS) government, holds key portfolios including industries, information technology and municipal administration. Like his father, he showed himself as an `agriculturist`. The profession of Shailima was shown as `business`.

K.T.R., popularly known as Rama Rao, owns an Innova car worth Rs 26.88 lakh. While filing his nomination last week, the TRS chief had declared assets of over Rs 22 crore but claimed that he owns no vehicle. According to KTR`s affidavit, he had an income of Rs 74.42 lakh including Rs 59.85 lakh agriculture income during 2017-18. His wife had an income of Rs 3.79 crore including Rs 24.65 lakh from agriculture. She also earned Rs 79.65 lakh profit from a partnership firm.

Shailima has movable assets of Rs 27.70 crore while the movable assets of her husband were only Rs 3.63 crore. She has equity shares worth over Rs 18 crore in Telangana Publications Private Limited besides investments in other firms. The couple owns agriculture and non-agriculture lands in Medak, Ranga Reddy, Hyderabad and Karimnagar districts, all valued at over Rs 10 crore.

Interestingly, Shailima has liabilities of Rs 27.39 crore while KTR has Rs 33.28 lakh liabilities. The couple has given a loan of over Rs 1 crore to KCR.

KTR also declared in the affidavit that he along with seven others were convicted by a railway court in Secunderabad in 2016 in a case registered during the Telangana movement. However, no punishment was imposed by the court, which extended the benefit under Probation of Offenders Act and released him after an admonition.

The TRS leader also provided details of 16 other criminal cases pending against him. All the cases were booked during the agitation for statehood to Telangana.