Telangana Bus Strike: Passengers stranded as TSRTC buses go off roads - All you need to know

​In a major development, buses of state-owned Telangana State Road Transport Corporation (TSRTC) went off the roads across the state as employees began an indefinite strike from Friday midnight to press for their demands. 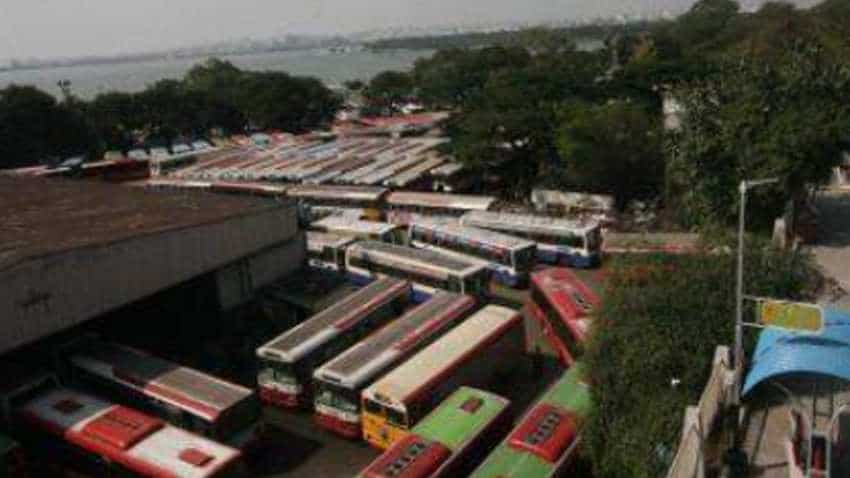 Hundreds of passengers were stranded at bus stations across the state.
Written By: Prashant Singh
RELATED NEWS

Osmania University result 2019 announced at osmania.ac.in; Check other details
In a major development, buses of state-owned Telangana State Road Transport Corporation (TSRTC) went off the roads across the state as employees began an indefinite strike from Friday midnight to press for their demands.
Passengers stranded
Hundreds of passengers were stranded at bus stations across the state and people travelling to their destinations for Dasara and Bathukamma festivals faced severe inconvenience as over 10,000 buses remained confined to the bus depots.
Temporary services
Authorities were running skeletal services by using 2,100 hired buses and deploying temporary drivers and other workers. Buses of some schools were also pressed into service.
50,000 employees join strike
The Joint Action Committee of TSRTC employee unions claimed that all 50,000 employees are participating in the strike. JAC leaders said they were not afraid of the government threats to dismiss striking employees from service.
The government has declared the strike illegal and warned that those not returning to duties by 6 p.m. on Saturday will be dismissed from service.
Officials said Essential Services Maintenance Act (ESMA) will be invoked to deal with the strike. They claim that TSRTC management had the power to dismiss the striking employees from service.
Tough stand by Government
Taking a tough stand, the government late Friday night warned that only those reporting to duty by 6 p.m. on Saturday will be treated as TSRTC employees. The government said that the rest will never be taken back into the organisation.
Those who don't report by 6 p.m. Saturday will be deemed to have given up jobs on their own, said an official statement after Chief Minister K. Chandrashekhar Rao held a review meeting with Transport Minister and top officials.
Rao, who held the meeting soon after his return from New Delhi, took serious note of the decision of the JAC to go on strike.
The government also dissolved the three-member committee of IAS officials constituted to look into the demands of the employees and declared that there will be no more talks with the union leaders.
After talks with the panel failed, JAC leaders decided to go on strike to press for their demands, the chief being merger of TSRTC with the government.
The government took strong exception to the JAC calling for strike at a time when it hoped that the income during Dasara and Bathukamma festivals will be of some help to the TSRTC, which is neck-deep in losses.