Tata Consultancy Services (TCS) has beaten the target prices that most brokerages fixed on the scrip post Q4 FY18 results. Significantly, the company has maintained its great performance after the exit of former chief N Chandrasekaran. 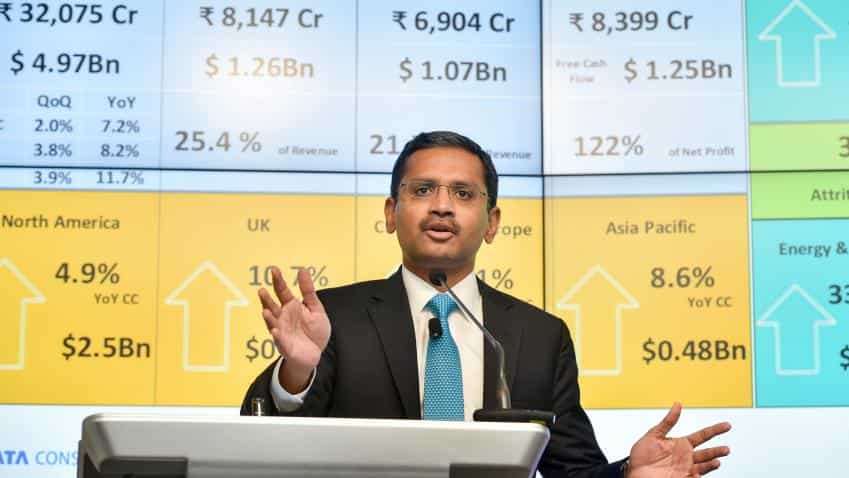 TCS share price rallied over 4 per cent to hit its fresh lifetime high of Rs 3557, extending its 7 per cent rally during Friday's session after the IT bellwether reported robust earnings in the March quarter of financial year 2018. The stock has beaten the target prices that most brokerages fixed on the scrip post Q4 FY18 results. Significantly, the company has maintained its great performance after the exit of former chief N Chandrasekaran. TCS is now being run by Rajesh Gopinathan, who was elevated to the role of chief executive in February 2017 after serving as the chief financial officer since 2013.

Energy-to-telecom conglomerate Reliance Industries, led by Mukesh Ambani, is the only other Indian company that had breached the $100 billion mark, way back in 2007.

On Thursday, the country's largest software exporter while announcing its Q4 result, reported a 4.4 per cent growth in its consolidated net profit at Rs 6,904 crore. The board also recommended a 1:1 bonus share issue, along with Rs 29 per share dividend. However, for the full fiscal year to March 2018, TCS saw its net profit dip 1.7 per cent to Rs 25,826 crore, though revenue rose 4.3 per cent to Rs 1.23 lakh crore. "To some extent (it has been) a sobering year that it is both a time of optimism as well as the fact that the year has actually been lower (on revenue growth) than in the recent past," managing director and chief executive Rajesh Gopinathan said.

"We are on the right trajectory and will achieve the targeted double-digit growth in dollar revenue in FY19, pointing out to the 11.7 per cent growth achieved in the March quarter," he added. The cash-rich company has given out close to Rs 26,000 crore to the shareholders in dividends and bonuses in FY18.

"With robust deal wins and greenshoots in banking, financial services and insurance (BFSI) sector, there is definite possibility of double-digit revenue growth. With growth acceleration, scale up in digital and support from currency, margins are ready for uptick as well, implying return of double-digit revenue/earnings growth after 3 years," said brokerage Edelweiss Securities in a note.