In a letter to Prime Minister Narendra Modi, Swamy asked him to subject Goods and Services Tax Network (GSTN) to a "close second look" and "thorough scrutiny", questioning how a private entitity can be allowed access to "sensitive" information without security clearance. 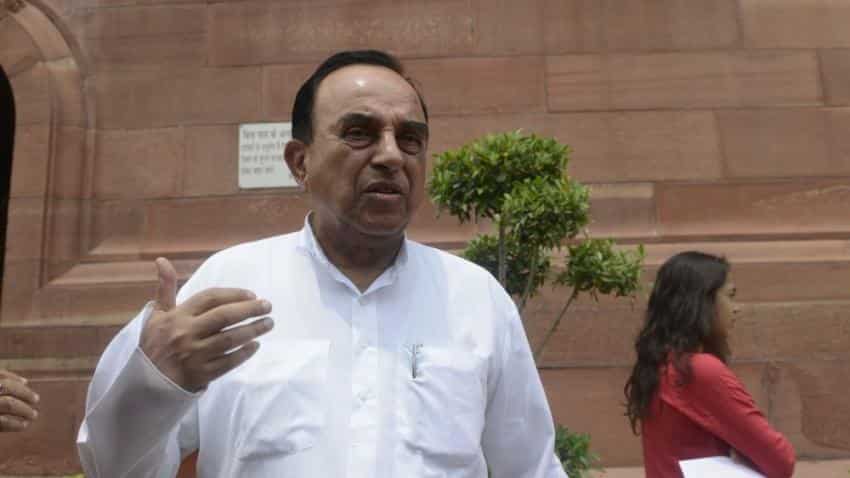 Why is Rupee falling? Because currency is exiting country in form of black money: Subramanian Swamy

BJP leader Subramanian Swamy has raised strong objections to a majority stake for private entities in the company formed during UPA to manage and control the accounting and collection of GST and has urged the Prime Minister to ensure that it is replaced by a government-owned structure.

In a letter to Prime Minister Narendra Modi, Swamy asked him to subject Goods and Services Tax Network (GSTN) to a "close second look" and "thorough scrutiny", questioning how a private entitity can be allowed access to "sensitive" information without security clearance.

Referring to ownership details of the GSTN company, that will manage and control the accounting and tax collection of GST, he said central and state governments will jointly have only 49 per cent stake in it and rest with private entities like HDFC Bank, ICICI Bank and LIC Housing Finance Limited, that have foreign shareholding.

Alleging that GSTN has "appropriated" around Rs 4,000 crores in expenses and fees for its preliminary exercises, he asked why "private profit making entities have any stake, and that too majority stake" in a Section 25 company, which is a not-for-profit organization.

"The most significant player it is obvious, in this tax collection effort should be the one who generates data collection. In this case, that would be the central and state Governments.

"Everything else such as adjusting the percentage of GST for various states are just a matter of programming, which could be done by the Government itself through its Department of Electronics. After all,

Government has already codified Income Tax. Nothing can be more complicated than that!," Swamy said in his letter to Modi.

He said the Home Ministry has not even been consulted and neither approved GSTN operators security clearance to allow them access to tax data.

"In fact that it was never placed before Home Ministry for security clearance is shocking," he said.

"There is still time to put the right Government owned structure in place. Meantime GSTN has appropriated nearly Rs. 4000 crores in expenses and fees for its preliminary exercises Hence, I urge you to subject GSTN to a close second look and thorough scrutiny," Swamy, who is a Rajya Sabha MP, said in his letter.

The BJP leader noted that GST has a long way to go and only necessary constitutional amendments have been passed in Parliament. States have to come on board and the final Bill needs to be drafted and agreed to be made into law.

"Adequate security has to be established to ensure that this data does not fall in the wrong hands," he said.

The BJP leader said as of January 31, 2016, the Centre and state governments have in GSTN only 49 per cent of the shares. Being a Section 25 company, GSTN is a not-for-profit organization. "Then why should private profit making entities have any stake, and that too majority stake in it? What is in it for them?," he asked.

Swamy said implementing GST scheme requires constitutional amendments and then only the GST administration and tax management company would be by GSTN.

"All data management for computation of tax share, will be by GSTN. That is, the Finance Ministry in 2013 took this decision to outsource such confidential assessment and activity, to the private sector.

"It was a swift and secret move in 2013 to float this company with 51 percent private shares," he pointed out.

Swamy also claimed that a close look at the private partners reveals that entities such as the HDFC Bank, ICICI Bank and LIC Housing Finance Limited have shareholding of several foreign investment companies.

"The 10 pc share of NSE company is ominous," he said and questioned the credentials of the firm.

He also said that tax administration is a matter that deals with sensitive private information and being such a large shareholder, this automatically means that HDFC and ICICI will be bankers of public money collected through taxes.

"Thus a large amount of money will pass through these banks," he claimed.

Why is Rupee falling? Because currency is exiting country in form of black money: Subramanian Swamy