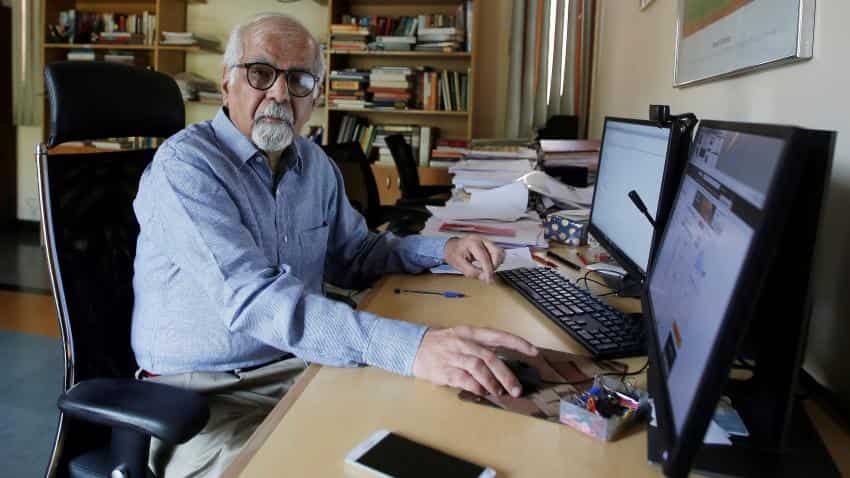 Srjit Bhalla said India's CPI inflation is based on 2011 base year, and has a food inflation share which is much higher than what it should be. Image source: Reuters
Written By: PTI
RELATED NEWS

Making a case for doing away with inflation targeting by the RBI, Economic Advisory Council to the Prime Minister (EAC-PM) member Surjit Bhalla today said it has made zero impact on prices. Bhalla also said that real interest rate, which is the difference between the nominal interest rate and inflation, is very high in India and not justified for an emerging economy. "Inflation targeting in India has zero impact on inflation. New Zealand started inflation targeting in 1998, and it has not gone anywhere," he said at an event organised by Brookings India. Under the new Monetary Policy Framework, the central bank aims to contain inflation at 4 per cent with a band of (+/-) 2 per cent.

Bhalla pointed out that average inflation in 2017-18 was 3.5 per cent. "Obviously for RBI that was very very high...India's real interest rate is higher by 2.5 per cent, which is 3rd highest in the world, India's real repo is soon going to be second highest in the world. "Real repo rate higher by 2.5-3 per cent is not justified in emerging economy like India," the noted economist insisted. The Reserve Bank of India on April 5 kept the repo rate unchanged at 6 per cent in the first monetary policy meeting of the new fiscal year 2018-19.

Bhalla said India's CPI inflation is based on 2011 base year, and has a food inflation share which is much higher than what it should be. "... So, we should be looking at services and wage inflation," he suggested. The EAC-PM also pointed out that fiscal deficit provides zero clues about the slowdown in inflation as from 1996-2007, India's fiscal deficit continuously went up but inflation systematically came down.

"Procurement prices explain inflation in India, not fiscal deficit or output gap," he observed. Bhalla said India's average inflation between 1996-2004 excluding onion year in 2008 was 4 per cent and average inflation rate in 2006 to 2013 was highest in Indian history.
He further said even oil prices do not play significant impact on inflation saying last time when oil prices went up to USD 100 per barrel, world inflation came down.