The Railway Minister announced that two high-speed rail lines would be built between Visakhapatnam and Chennai and Bengaluru and Amaravati in collaboration with foreign countries. 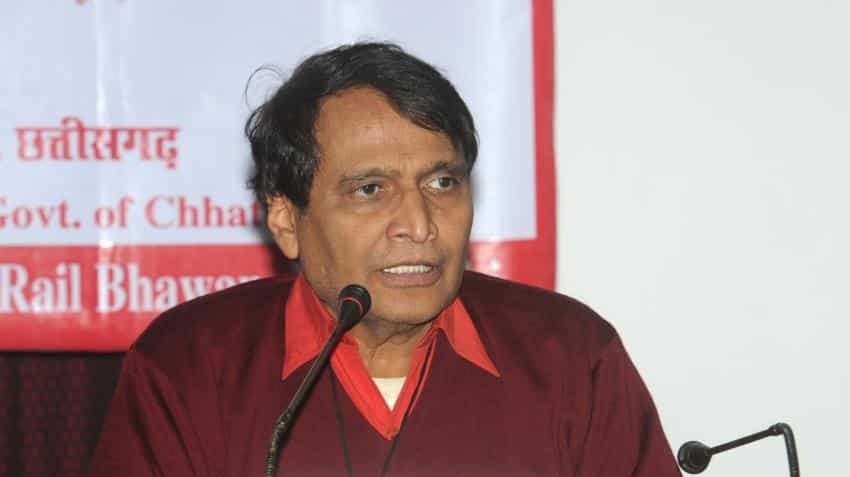 Indian Railways introduces new travelling rules from today; see what they are

A day after he was elected unopposed to Rajya Sabha from Andhra Pradesh, Railway minister Suresh Prabhu on Saturday announced a number of major railway projects for the state, including a high-speed rail line between new capital Amaravati and Bengaluru.

He, however, remained non-committal on the establishment of a new railway zone with headquarters at Visakhapatnam, alleging that the erstwhile UPA government did not "specify" it in the AP Reorganisation Act, 2014.

"It is incumbent upon us do as much as possible in this regard," Prabhu said after a three-hour-long meeting with Chief Minister N Chandrababu Naidu wherein railway projects related to the state were reviewed.

The Railway Minister announced that two high-speed rail lines would be built between Visakhapatnam and Chennai and Bengaluru and Amaravati in collaboration with foreign countries.

The foreign collaborator would be decided after talks with different countries, he said.

"I held talks with French officials yesterday but that was only a preliminary meeting. We will talk with other countries as well and choose a partner," Prabhu added.

He said a Special Purpose Vehicle\Joint Venture Company would be formed by the Railways with Andhra Pradesh government in a couple of months for taking up major rail projects in the state.

"Through the proposed SPV, 21 railway stations in Andhra Pradesh will be redeveloped as (on the lines of) airports. The South Central Railway General Manager will coordinate with the state government in this regard and review the works every month," the Minister added.

The Railway Minister also announced an aggregate capital investment of Rs 1,000 crore for setting up two new railway workshops at Kurnool and Tirupati and a wagon overhaul facility at Visakhapatnam.
These facilities would create hundreds of jobs, he said.

Prabhu also announced that a major Rail Neer plant would also be set up in Andhra Pradesh.

Two special tourist trains would also be introduced in the state, one of which would be run by the Indian Railways Catering and Tourism Corporation (IRCTC).

"The second tourist train will be modelled on the Palace on Wheels and the Deccan Odyssey. We will work with the state government on this," Prabhu added.

Noting that he has now become "a citizen of Andhra Pradesh", following his election to Rajya Sabha from the state on Friday, Prabhu said he worshiped Lord Balaji atop Tirumala Hills on Saturday.

"Andhra Pradesh has Lord Balaji, the biggest asset. I discussed with the Tirumala Tirupati Devasthanams authorities this morning about developing a world-class railway terminal in Tirupati under Public Private Partnership. I am informing the Chief Minister about this now," the Railway Minister said.

"Andhra Pradesh will not be lacking in terms of not having railway support. The state is facing transitional difficulties because of the state bifurcation. Railways will do everything to help Andhra Pradesh," Prabhu promised.

Replying to questions on the promised new railway zone at Visakhapatnam, Prabhu pointed out that the Reorganisation Act only said "the government will explore the possibility".

"The UPA government had not clearly mentioned in the Act about setting up the railway zone. It only mentioned about exploring the possibility. It is now incumbent upon us to do as much as we can," he added.

But considering Visakhapatnam's importance and its potential for growth, the Railways would come up with many projects there, Prabhu said.

Chief Minister Chandrababu Naidu said the Railway Minister promised to take up the railway zone issue with the Prime Minister.

He also requested the Union Minister to create a loop for the proposed Mumbai-Kharagpur Freight Corridor to connect Visakhapatnam.

"This will ensure east-west port connectivity. We have also requested him to prepare a comprehensive integrated logistics plan," Chandrababu added.

Indian Railways introduces new travelling rules from today; see what they are