The apex court will today hear a plea challenging the Centre's decision to make Aadhaar card mandatory to avail any social welfare benefits. 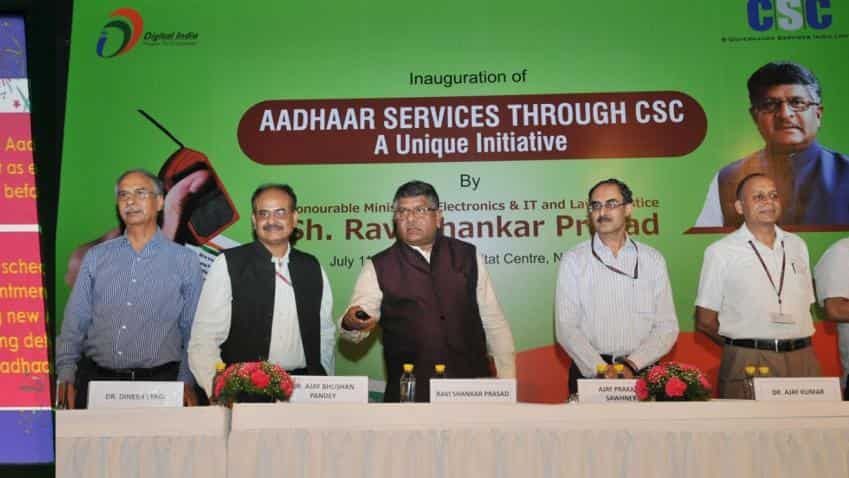 Union Electronics and IT Minister Ravi Shankar Prasad at the inauguration of the workshop on Aadhaar Services - A Unique Initiative through, in New Delhi on July 11, 2017. Photo:IANS
Written By: ZeeBiz WebTeam
RELATED NEWS

Haridwar Aadhaar issue: UIDAI rules out any 'goof up'

In a federal structure, how can a state file plea challenging Parliament's mandate: SC to WB govt.

We know it is a matter which needs consideration but you satisfy us how state can challenge it: SC to West Bengal.

The Supreme Court (SC) is scheduled to hear a plea today challenging the government's decision to make the Aadhaar card mandatory to avail any social welfare benefits, according to a Hindustan Times report.

While the Aadhaar card had been introduced by the previous UPA government, the current BJP-led government has been pushing for the card to be mandatory and linked to everything including the pan card, bank account, mobile phones, drivers license and even for children admission into schools.

However, there has been many questions regarding the safety of the data collected of more than a billion Indians as there have been instances where it has been used for identity theft and has had security breaches.

The opposition has been very critical of the government's move to make aadhaar manditory. West Bengal, Chief Minister, Mamata Banerjee had earlier this month said that she is ready to lose her mobile phone connection but will not link it to her Aadhaar card.

According to a Hindu Business Line report, there have been at least 21 Aadhaar leaks and data breaches that have been detailed till April 27 this year.

Some of them include India cricket team's former captain MS Dhoni's aadhaar card details being published in March online, in April more than a million aadhaar numbers were leaked by a Jharkhand government website, later it was also found that 210 websites of the central and state government departments were found to be displaying aadhaar numbers of beneficiaries.

In August a Punjab government website had exposed the Aadhaar numbers of over 20,000 people who had applied for low-cost housing in Ludhiana and Jagraon. A Bangalore-based software developer was also arrested in August for accessing aadhaar database through a mobile app he developed.

Haridwar Aadhaar issue: UIDAI rules out any 'goof up'