Sui Dhaaga box office collection: The movie was released across 700 screens in the overseas markets alone. 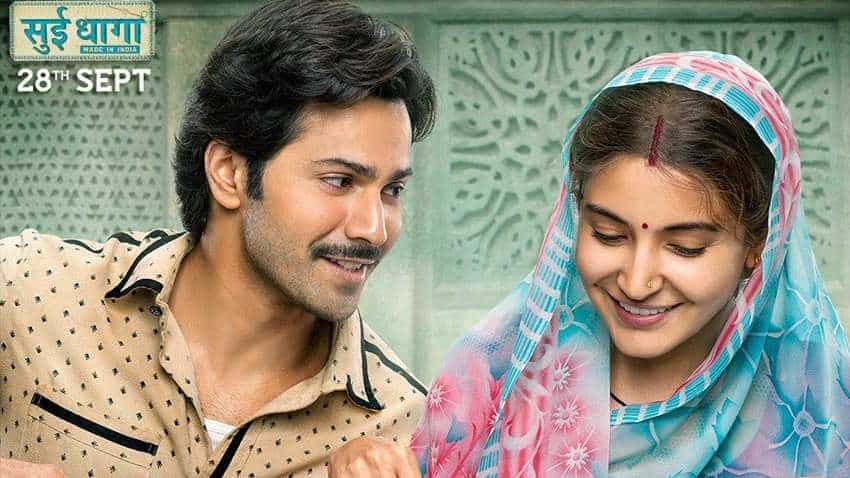 Sui Dhaaga box office collection: Sui Dhaga is a Yash Raj production directed by Sharat Kataraiya, the music is by Anu Malik, and the film is a down to earth one whose characters are humble and innocent but have to face the test of life.
Written By: ZeeBiz WebTeam
RELATED NEWS

Sui Dhaaga - Made in India was released across 700 screens in the overseas markets alone. The movie earned Rs  13.61 lakh from 22 screens in Australia while it pocketed Rs 5.63 lakhs from 13 screens in New Zealand.

The movie is expected to earn more during the weekends - Saturday and Sunday as it has very fewer competitions from the new releases.

Both the actors - Anushka and Varun have earned praise from all the quarters for their acting in the film.

Even Anushka's husband Virat Kohli was clean bowled by the acting of the duo in the film.

"Saw @SuiDhaagaFilm for the second time last night and I loved it more than the first time. What an emotional rollercoaster with brilliant performances by the entire cast...Mauji was superb @Varun_dvn. But Mamta's character stole my heart totally. Her ability to be so quiet yet so powerful and impactful makes you fall in love with her. SO PROUD my love @AnushkaSharma. Don't miss it guys! #SuiDhaagaMadeInIndia," said Kohli on Twitter.

Considering that the movie is not an out and out commercial film, fans also should not expect a performance on par with an Akshay Kumar starrer. Nevertheless, Bollywood industry is expecting a lot as the hype surrounding the movie had involved a huge number of celebrities and that will pay off in the end when the final counting is made. Also, over the last few weeks, there has been no big ticket film release, except Stree (Rs 122 cr film now), and this one is expected to fill that role well.

Since the movie has not crossed Rs 10 crore mark in India on day 1, it has failed to get into the list of the top 10 movies of 2018. The 2 things that will now decide the fate of the film are movie critics, who have been kind so far, and word of mouth boost by the viewers. If both these things fire together, the sky is the limit.

Sui Dhaga is a Yash Raj production directed by Sharat Kataraiya, the music is by Anu Malik, and the film is a down to earth one whose characters are humble and innocent but have to face the test of life. It is designed to appeal to a large mass of the movie-going audience without actually getting into the commercial cinema space. Yes, its foundation is laid in the village, but it is appealing to the social entrepreneurship that has been sparked by an increasingly aspiring India - don't ask or do jobs, instead get into a position to offer employment to others! Oh yes, did we tell you that the full title of the film is Sui Dhaaga - Made in India.