Storm in Delhi, Uttar Pradesh, more: IMD forecast is for another thunderstorm today 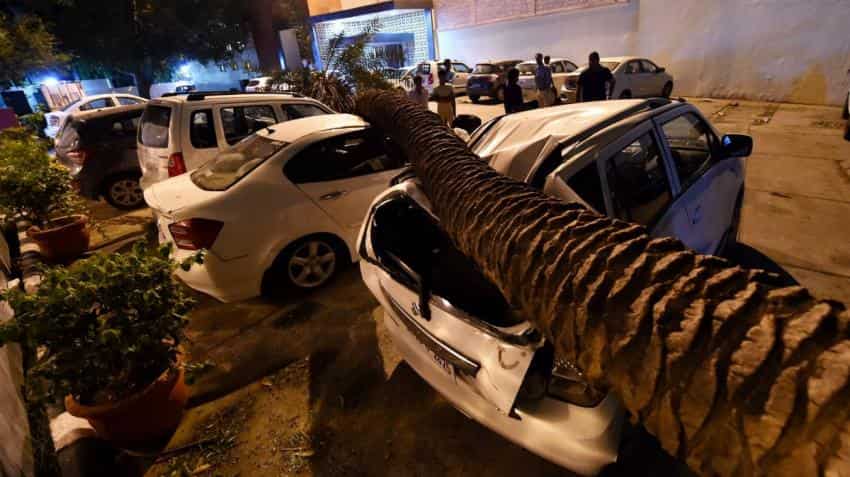 Lightning killed 12 people, including four children, in Kolkata. Nine were killed and 34 injured in Uttar Pradesh after a thunderstorm hit the state. Two people were killed and 18 injured in Delhi’s dust storm. One person each was killed in neighbouring Ghaziabad and Noida. Andhra Pradesh and Telangana reported eight and three deaths, respectively.

The death toll could increase as information on the extent of the tragedy was still pouring in. Met predicted thunderstorms accompanied by light rain for northern India over the next two to three days.

Disruptions were also reported from Haryana and Chandigarh. On May 2, 134 people were killed across northern and western India in similar incidents.

In Delhi-NCR, a violent dust storm and rain disrupted air, road and Metro traffic and uprooted trees. The wind speed was as 109 kmph.

Operations at Delhi’s airport were put on hold and at least 70 flights were diverted because of poor visibility and high winds. The Noida-Dwarka Metro line was disrupted after a tree fall snapped an overhead cable. Trains stopped several times between 4pm and 6pm.

The Delhi police said there were 255 calls of tree fall, 75 of electric pole fall and 61 of roof collapse. Visibility was reduced and traffic hit in several areas of the national capital. The dust storm interrupted an event Delhi CM Arvind Kejriwal was to attend in east Delhi.

In west Delhi’s Pankha Road, a tree fell in the middle of the road, causing a huge jam. Two DTC buses got stuck there. Police had to bring a crane to remove the tree.

In southwest Delhi’s Najafgarh area, two persons were injured after the tin roof of their house collapsed.

In south Delhi’s Palam area, a man was injured after the wall of his house collapsed.

But the dust storm and rain also brought down the mercury after a spell of scorching heat over the past few days.