Stocks to watch out for: Want good returns? Experts bet on Infosys share for 16% gains 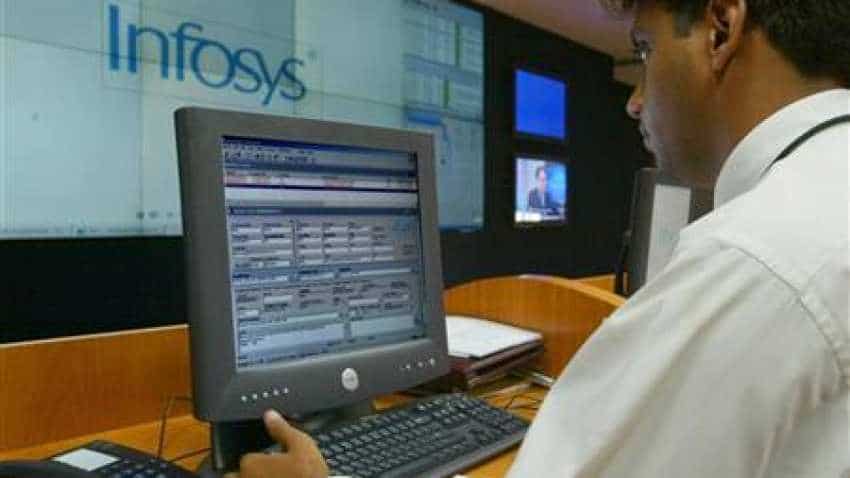 Experts are suggesting the Infy stock holder to further hold the stock and book profit in the range of Rs 790 to Rs 800 levels. Photo source: Reutrs

The Indian market investors having Insofys share in their demat account need not to book profit in current market scenario as the stock is expected to give around 16 per cent profits to its holders who take buy position in the blue-chip stock at around Rs 686 levels. the Indian equity experts are of the opinion that Infosys (INFY) posted strong revenue performance, robust large deal bookings and increased its FY19E rev guidance. However, operating performance was soft impacted by accelerated hiring, lower utilization (seasonality impact) and higher onsite-mix (large deal transition). Revenue came at USD 2,987mn, 2.7/10.1 per cent QoQ/YoY in CC terms. EBIT margin was lower by 118 bps QoQ to 22.6 per cent impacted by lower gross margin, however, EBIT percent guidance maintained. APAT stood at Rs 39.26 bn adjusted for Rs 4.51 bn Skava impairment.

Talking about the strong fundamentals of Infosys, Apurva Prasad, Analyst at HDFC Securities said in a written statement, "INFY’s large deal TCV in 3Q was USD 1,570mn from 14 wins (12 in 2Q) including 10 from NorthAm and 3 from Europe. Among verticals, 4 large deals were from BFSI, 4 from Manufacturing, 2 from Communication and 1 from Retail."

While commenting upon the near-term outlook of the company Amit Chandra, Analyst, HDFC Securities said in a written statement, "Four quarter margin headwinds on account of the wage increase, higher onsite investments (large deals). Buyback or interim dividend also provides support to the company fundamentals." Both equity analysts of the HDFC Securities maintained that investors holding the Infy shares should hold the stock further and book profit at around Rs 800 levels.

Standing in sync with the HDFC Securities views, Ravi Menon, Analyst at Elara Securities said in a written statement, "We had been waiting to see the margin impact of investments CEO Salil Parekh had promised and it is now visible in metrics. Growth has accelerated with Infosys (INFO IN) posting more than 10 per cent growth YoY in constant currency (CC) terms for the first quarter since the first quarter of the FY17. The progress on localization seems fast with more than 7,600 local hires already as per management. Repositioning of Panaya and Skava also shows flexibility towards investment and eases our concerns regarding potential client backlash from customers which had adopted these products. We expect faster growth in FY20E, given broad-based growth this quarter and US dollar 1.5 bn in large deals (higher than in 2QFY19 after adjusting for US dollar 700mn rebadging with Verizon)."

Accenture q3 results: What does it mean for Indian IT sector; TCS, Infosys among 4 stocks in focus post earnings