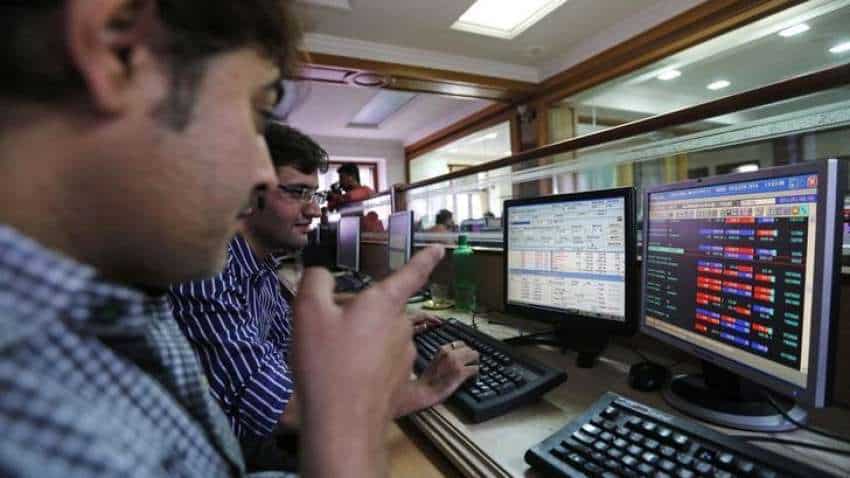 Stocks in Focus on June 2: Certain stocks came in news after the market was closed. These stocks can impact the indices when it reopens today. Photo: Reuters
Written By: Jitesh Kumar Jha
Edited By: Asit Manohar
RELATED NEWS

Stocks in Focus on April 23: Vodafone Idea, KNR Constructions to Welspun Corp; here are expected 5 Newsmakers of the Day

Stocks in Focus on June 2: Rising for the fourth straight session on Monday, June 1, 2020, the domestic shares ended with robust gains. Easing of lockdown, better-than-expected GDP numbers and positive global cues boosted market sentiment. The barometer S&P BSE Sensex jumped 879.42 points or 2.71% at 33,303.52. The Nifty 50 index gained 245.85 points or 2.57% at 9,826.15. But certain stocks came in news after the market was closed. These stocks can impact the indices when it reopens on Tuesday, June 1, 2020. List of such five stocks:

V-Guard Industries Limited: V-Guard Industries on Monday reported 50.7% year-on-year decline in March quarter consolidated net profit at Rs 29.9 crore due to the impact of lockdown. It clocked a profit of Rs 60.7 crore in the January-March period of the financial year 2018-19. Revenue from operations was down 27.4% to Rs 541.1 crore during the period under review as against Rs 745.8 crore in the year-ago period. EBITDA was 45.6 crore, down 43.3%, from Rs 80.4 crore. Margins stood at 8.4% against 109.8% of last year. Lockdown led to a revenue loss about Rs 250 crore in FY 20, with an attendant impact on the bottom-line of about Rs 70 crore. Sales during April were near zero. With partial opening of business in May, the revenues for the month were about 70% of the corresponding month of the previous year.

Auto Stocks in Focus: Auto companies on Monday reported the sales number of May 2020 and said demand is returning in the sector but the pace is tepid due to the nationwide lockdown on account of the COVID-19 pandemic. Although vehicle sales in May were just a part of what the sector reported in the year-ago period they were better than the near-zero numbers reported in April.

TVS Motor: Mumbai: TVS Motor Company Ltd has posted its total May sales numbers and reported 78.9% decline in sales at 58,906 units that include wholesales of two and three-wheelers and also the affordable mopeds. The company sold 3,07,106 units in the same month a year ago. The company said that its total two-wheeler sales stood at 56,218 units that included domestic sales of 41,067 units for the last month. It sold 2,688 three-wheelers last month. TVS Motor says resumed operations in India across all units in Hosur, Mysuru, Nalagarh plants from May 6. Seeing progressive opening of dealerships in India & overseas in the last 2 weeks of May & increasing further into June; witnessing a steady pick-up in customer retail since the last few days.

Ashok Leyland: Ashok Leyland, a Hinduja flagship firm, on Monday reported an 89% decline in total commercial vehicle sales at 1,420 units in May 2020. The company had sold 13,172 in the same month last year. Domestic sales declined 90% at 1,277 units as against 12,778 units in the year-ago month.

Kotak Mahindra Bank: Uday Kotak will be selling 5.6 crore shares or 2.83% stake worth over Rs 6,800 crore of the lender on Tuesday through the block deal. The stake sale would help bring down his stake in the country’s fourth-largest private sector lender to the RBI-mandated 26.10% from 28.93% now. The price band for the share sale has been fixed at Rs 1,215 to Rs 1,240 a piece. Uday Kotak has to reduce his stake in the private lender to 26% till August 17, 2020.

Tata Power: The company on Monday said that it has completed the acquisition of 51% stake in TP Central Odisha Distribution (TPCODL) for Rs 178.5 crore. Government of Odisha will hold the remaining stake in the venture. Company will manage power distribution business of Central Electricity Supply Utility of Odisha (CESU) from June 1. Besides, the company aims at raising Rs 3,000 crore by selling some non-core operations and restructuring its renewable energy business. The funds will be raised to pare debt and consolidate its India operations. The company seeks to reduce its debt from Rs 44,000 crore to Rs 25,000 crore by the end of this fiscal.

Reliance Industries: The mega Rs 53,125 crore rights issue of Reliance Industries Ltd (RIL) was completely subscribed on Monday, two days ahead of the last day of the share sale. The rights offering were subscribed 1.1 times. The company is offering 1 share for every 15 held as of record date, which was May 14, 2020.

Stocks in Focus on April 23: Vodafone Idea, KNR Constructions to Welspun Corp; here are expected 5 Newsmakers of the Day