Stock Market Tips By Anil Singhvi: Three reasons why October will be full of opportunities

Stock Market Tips By Anil Singhvi: After bloodbath at Dalal Street on the September series expiry, Zee Business Managing editor Anil Singhvi has said that October Series will be full of buying opportunities. 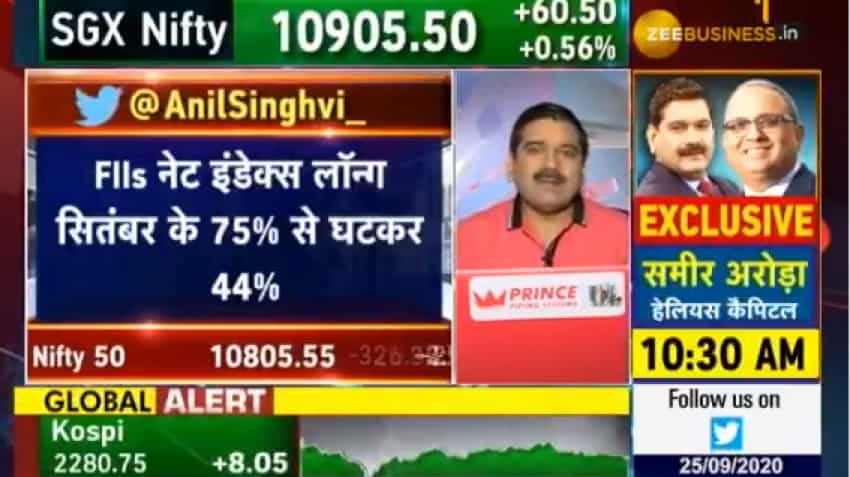 Speaking on the Foreign Institutional Investors (FIIs) net long position dipping from robust 75 per cent to 44 per cent Anil Singhvi said, "Decrease of 31 per cent net long position in the FIIs indicates that they are in oversold position. Generally, they keep their holdings to the tune of 35 to 40 per cent and hence at 44 per cent, they don't have much to sell now. Even in the July series, the net long position of the FIIs was 42 per cent when the market was in cautious mood. So, from now onwards, FIIs will either buy or remain neutral towards the Indian stock market."

On lowering Put Call Ratio (PCR) the Market Guru said, "Generally PCR at around 1.25 to 1.30 is considered safe for bulls but at the beginning of October Series, PCR is at 1.11 means the market is in oversold condition and hence, sharp bounce-back is widely expected."

Watch full coverage in video below:

On third reason that further strengthens the bounce-back probability Singhvi said, "If we look at the stock's rollover from September to October Series, there is sharp decline of near 20 per cent. At Nifty, stocks roll over declined from 80 per cent in September Series to 71 per cent in the October Series while the Bank Nifty witnessed almost same level of stocks rollover." On the basis of sharp decline in the stock's rollover, the Zee Business Managing Editor Anil Singhvi predicted strong bounce-back in the Indian stock market during the October series.