The stock market of India is expected to respond on the RBI Monetary Policy review which would be announced today. The market is rife with Repo Rate cut by around 25 bps to 50 bps.

Overall market trend is bullish and both Sensex and Nifty are above the psychological levels of 40,000 and 12,000 respectively. Photo: PTI

The stock market of India is expected to respond on the RBI Monetary Policy review which would be announced today. The market is rife with Repo Rate cut by around 25 bps to 50 bps. But, FII and DII are expected to remain silent till the RBI credit policy is announced by the RBI Governor Shaktikanta Das.

On account of positive global sentiments and RBI cutting its key rate in today's Monetary Policy (MPC) meeting. The BSE Sensex rose 52 points to 40,136 while the 50-stock Nifty went up 18 points to 12,039 levels in pre-opening session.

Amar Ambani, President & Research Head, YES Securities said, "The RBI policy on 6th June is going to be a big booster for the stock market. I expect RBI to cut rates by 25 basis points, change their monetary stance to accommodative and strongly address the liquidity deficit, may be even go for a surplus liquidity framework from neutral one presently. Inflation is not of concern and economic growth needs support. This will provide momentum to the market in coming days. I reiterate my Nifty target of 13000 in 2019. Post the Budget, we anticipate space for another 25-basis point rate cut."

Oil and Gas, telecom, utility goods, Bankex, finance, tech and IT index is in red zone.

Hindustan Petroleum Corporation LTd or HPCL shares rose 3.56 per cent, IOCL stocks rose 1.45 per cent while Indraprastha Gas counter went up near half a per cent.

INR vs USD: Dollar/rupee traded slightly negative on Tuesday and settled at 69.4225 compared to Monday close of 69.3975. It drop towards day low 69.1950 on likely FII inflows into the local assets amid sharp easing in crude oil prices, which led spot to fall to a four-week low. Further, the Growing prospect of a Fed rate cut later this year weakened the US dollar against Rupee. It retreated following the slide in US Treasury yields, with the 10-year rate falling to its lowest level since September 2017. Technical, after hitting a day low 69.1950, USDINR saw bounce back towards 69.4975 and settled at 69.4150 levels. On the above chart, pair found support of July 2018 swing which creating probability for momentum gain towards 69.85 and above. On the downside, crucial support is seen at 69.15 and break below only will expect to test 68.80 and below. 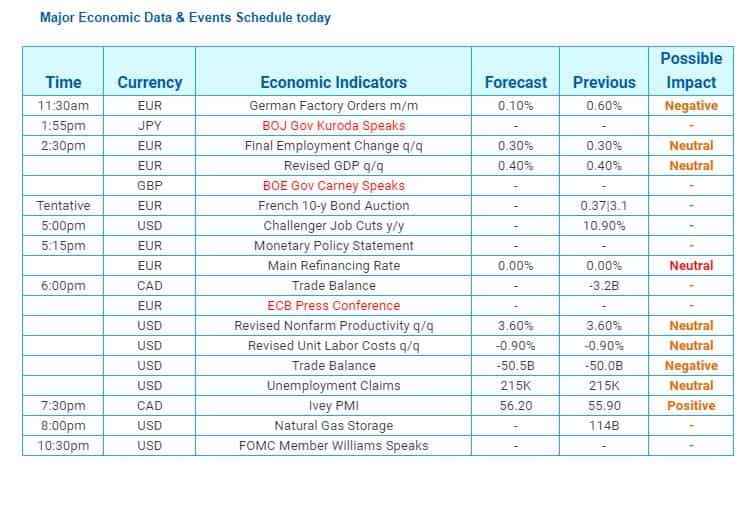 Consumer Durables show metal: Amid heavy selloff ahead of the RBI credit policy announcement the consumer durable index is able to maintain its presence in the green zone. The index major Blue Star stocks were up 2.1 per cent, Titan Company counter was up 1.17 per cent while Rajesh Exports, TTK Prestige, VIP Industries were among the gaining stocks.

RBI cuts Reverse Repo Rate by 25 bps to 5.75 pct. All six members of the MCP agreed for the rate cut.

Changing its stance from 'neutral' to 'accommodative' the Reserve Bank of India (RBI) has cut the Reverse Repo Rate by 25 bps to 5.75 per cent. All six members of the Monetary Policy Committee (MPC) agreed to cut rates by 25 bps. The bank has increased its inflation from 3 per cent to 3.1 per cent.

Sensex falls 500 pts, Nifty around 11,850 after rate cut call by RBI; PSU banks drag further. All sectoral indices are trading negative led by PSU bank, energy, pharma, metal, auto and infra. While IT and FMCG are hailing negative in the session so far.

Naveen Kulkarni, Head of Research, Reliance Securities said, "While the rate cut of 25 basis points was in line with our expectation, concerns over growth and challenges regarding liquidity continue to linger. The market is not necessarily cheering the rate cut as it had already factored in and something more was expected."